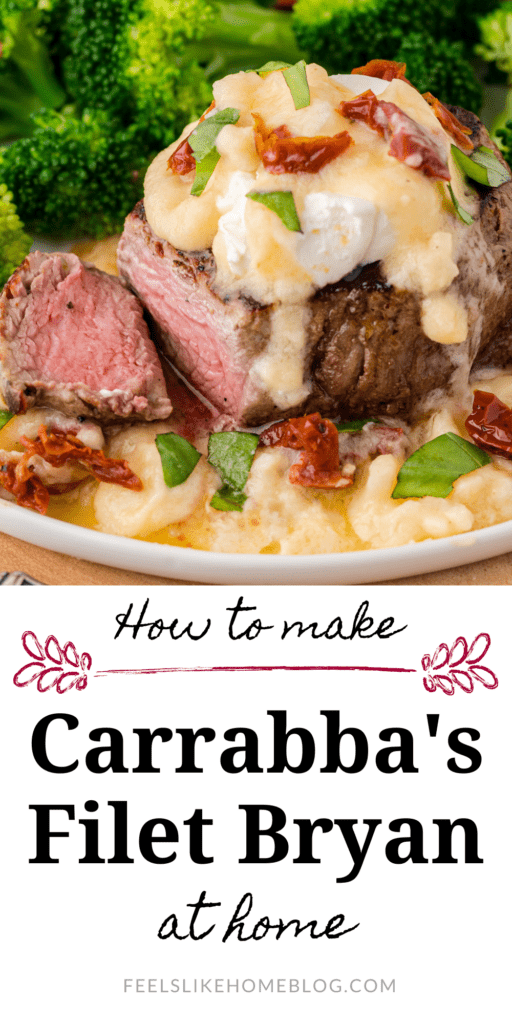 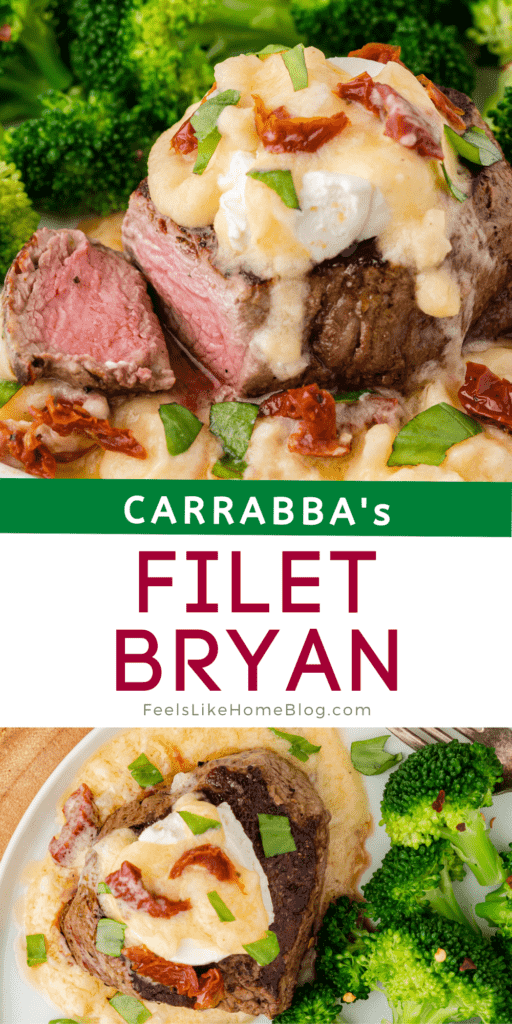 I have a lot of favorite meals and favorite restaurants, but my A-1 absolute best most favorite restaurant meal is Filet Bryan from Carrabba's. Their Chicken Bryan runs a close second, but the filet is the best. I love the sun-dried tomatoes and the lemon butter sauce and the buttery-smooth filet mignon. It's heavenly.

Let’s get real for a second. Carrabba’s is a pretty expensive restaurant, and we can’t justify eating there outside of special occasions. And even for Carrabba's, the filet is super pricey, so I usually opt for the chicken version. If I’m going to get Filet Bryan, I’m going to have to make it at home.

We have made Filet Bryan in two ways, both really excellent. Grilling the filets on the grill outside gives them a really nice, rich flavor that adds something to the dish. Realistically though, Joe would have to wade through my dining room garden, fight two cats who constantly try to escape, and then manage our old and in need of replacement sliding glass door in order to get out to the grill.

Suffice it to say that the filets get cooked under the broiler more often than not, especially during the colder months of the year (when the plants can’t be outside), and the dish turns out just fine that way too.

How did Filet Bryan get its name?

This recipe is a Carrabba's original, having been named by the Carrabba family after the town where they lived in Texas after immigrating to the US from Italy in 1890 (Bryan, Texas).

Chicken Bryan is Carrabba's signature dish even today, and its cousin, Filet Bryan is just as good. You can find a copycat recipe for Chicken Bryan here, but it's essentially the sauce from the recipe below, spooned over chicken breasts instead of filet mignon.

See printable recipe card at the bottom of the page for measurements.

Lemon butter sauce will break if you heat it too much. Whisk or stir it often while you're cooking it, never go above the low heat, and take it off the heat as soon as it's warmed through.

If the sauce does break, serve it anyway. It'll just be more like a salad dressing consistency with lemon juice and melted butter separated. It still tastes good.

You can serve this sauce over almost any cut of beef. I love filets (who doesn't?!) but you could serve it over burgers and it would still taste amazing.

What do you serve with filet Bryan?

I like to serve Filet Bryan with some pasta or zoodles (zucchini noodles) smothered in the extra lemon butter sauce or in homemade spaghetti sauce. I've also served it with steamed broccoli (pour the lemon butter over top of the broccoli!) or Parmesan roasted carrots. My kids eat those Parmesan carrots like they're candy, so we serve them with a lot of things.

I've heard of people serving Filet Bryan with crockpot mashed potatoes and spooning the sauce over those, but I've not been brave enough to try it. It's probably delicious because this sauce is to die for.

How to store leftover Filet Bryan

This recipe only makes 2 filets, so unless you're cooking just for yourself, there won't be leftovers. But there could be leftover sauce, and it's amazing over noodles, zoodles, or steamed vegetables.

You can store cooked steak in the refrigerator in a zippered plastic bag or an airtight container for up for 3-4 days. The best way to reheat it is in a 250º oven for 20 minutes. Never microwave steak! It will get rubbery and taste awful. Take the extra time to heat it slowly in the oven, and you'll be glad you did.

The sauce can be reheated in the microwave, but do it gently in bursts of 20 seconds, stirring between each burst. If you overheat the sauce, it will break (separate), but you can still eat it if that happens.

Try these other delicious copycat recipes: 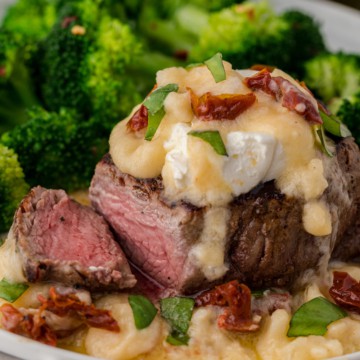 You will need a broiler pan or cast iron skillet or gas grill to make this recipe.