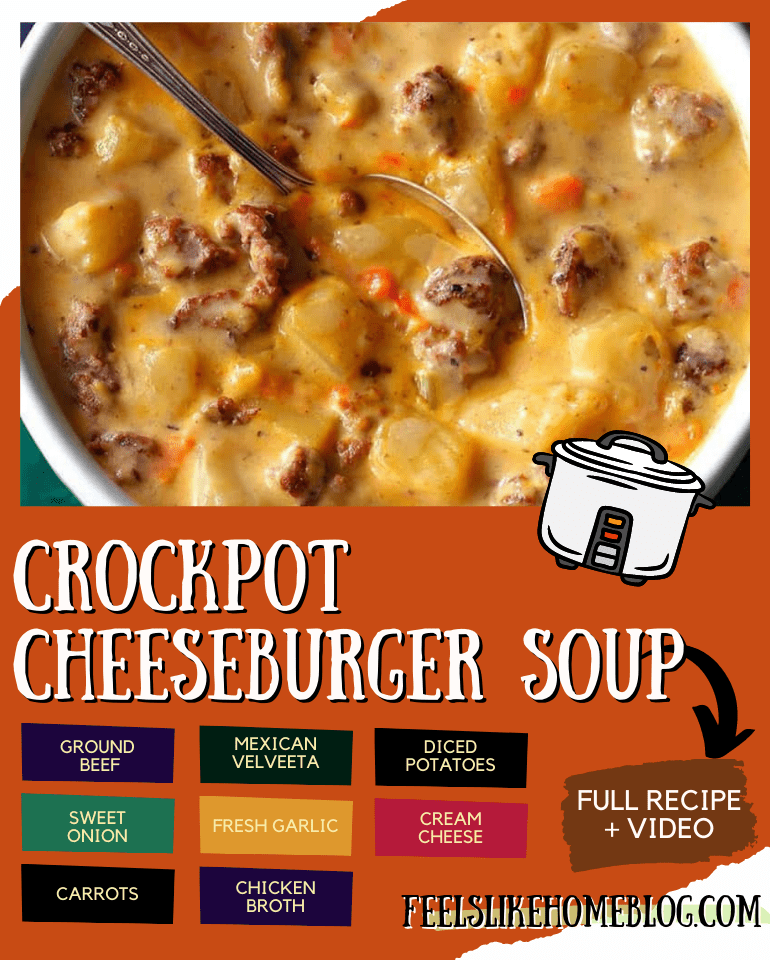 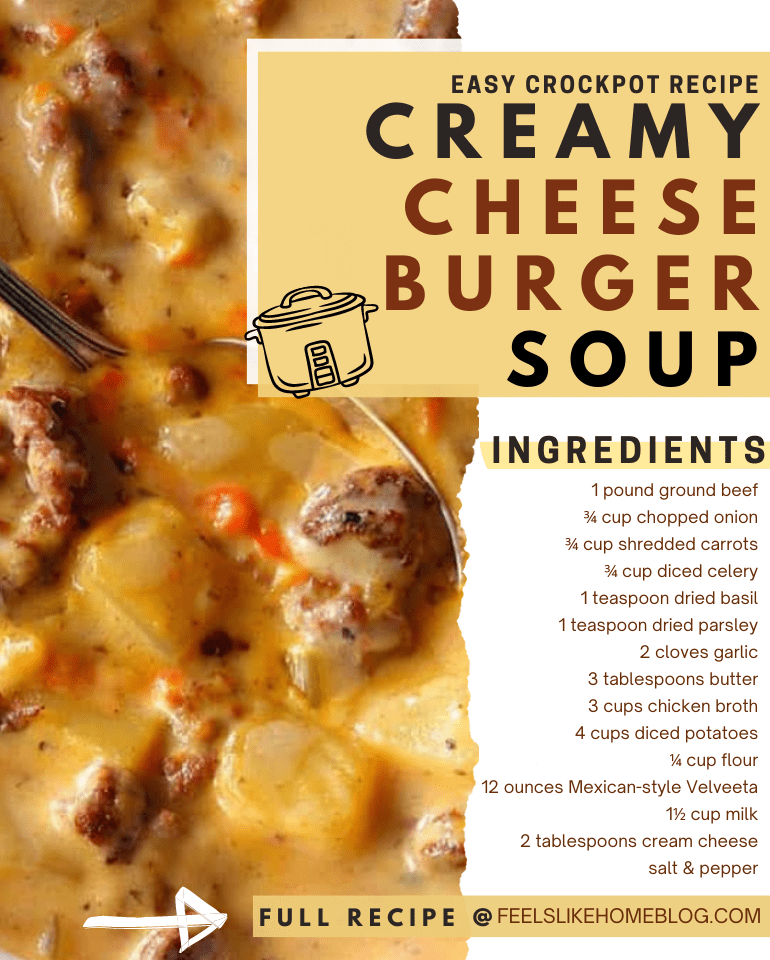 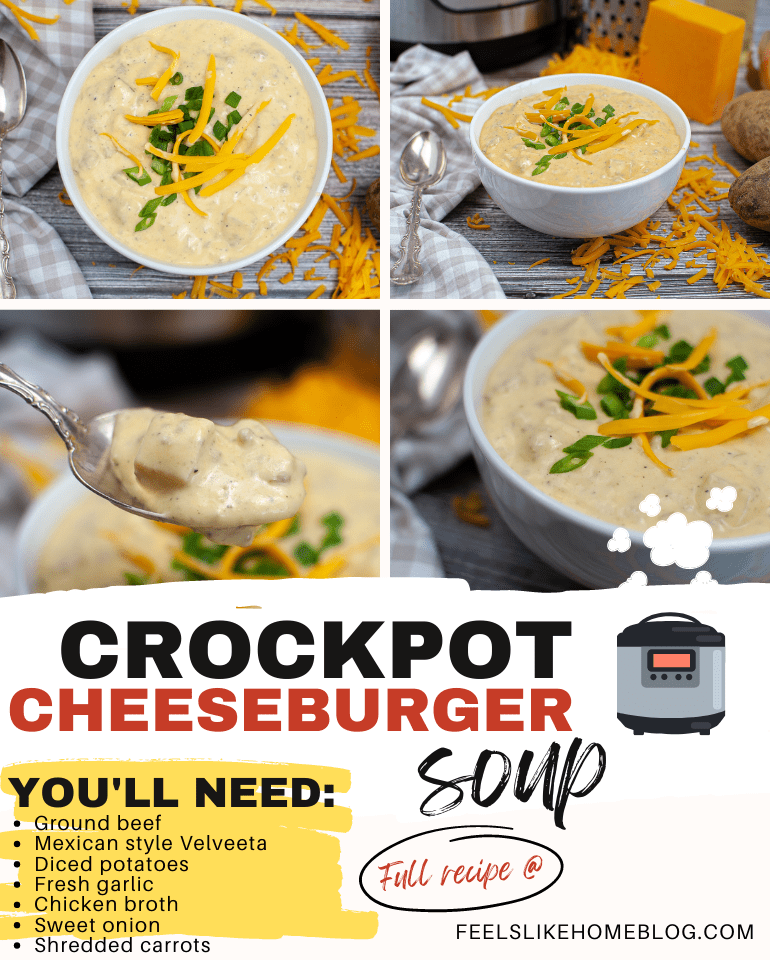 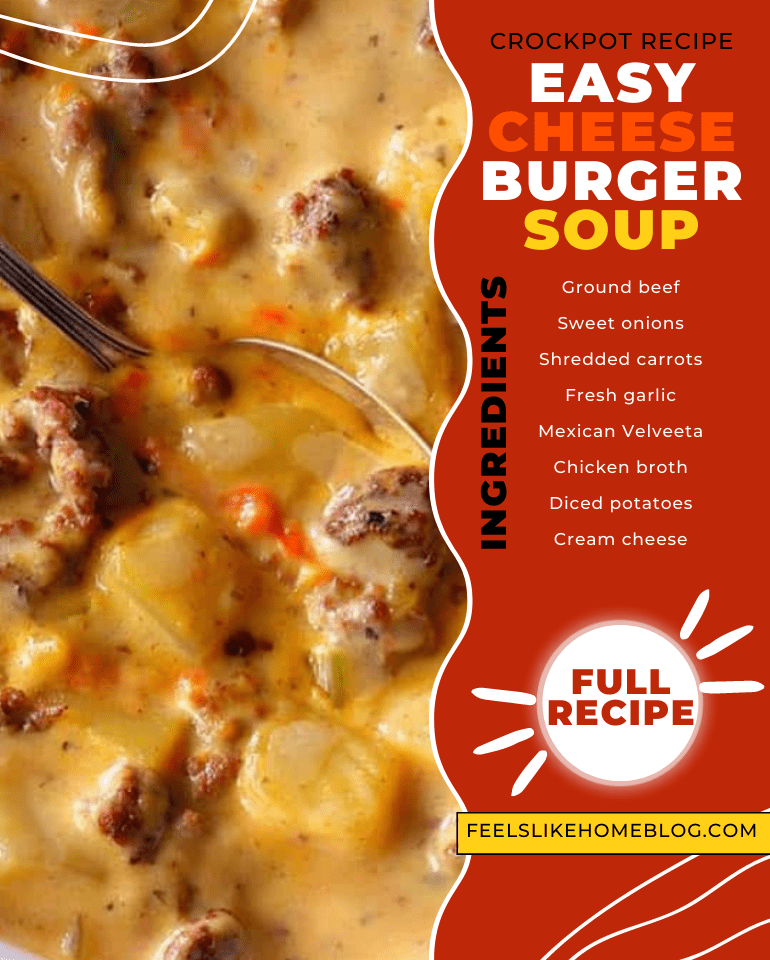 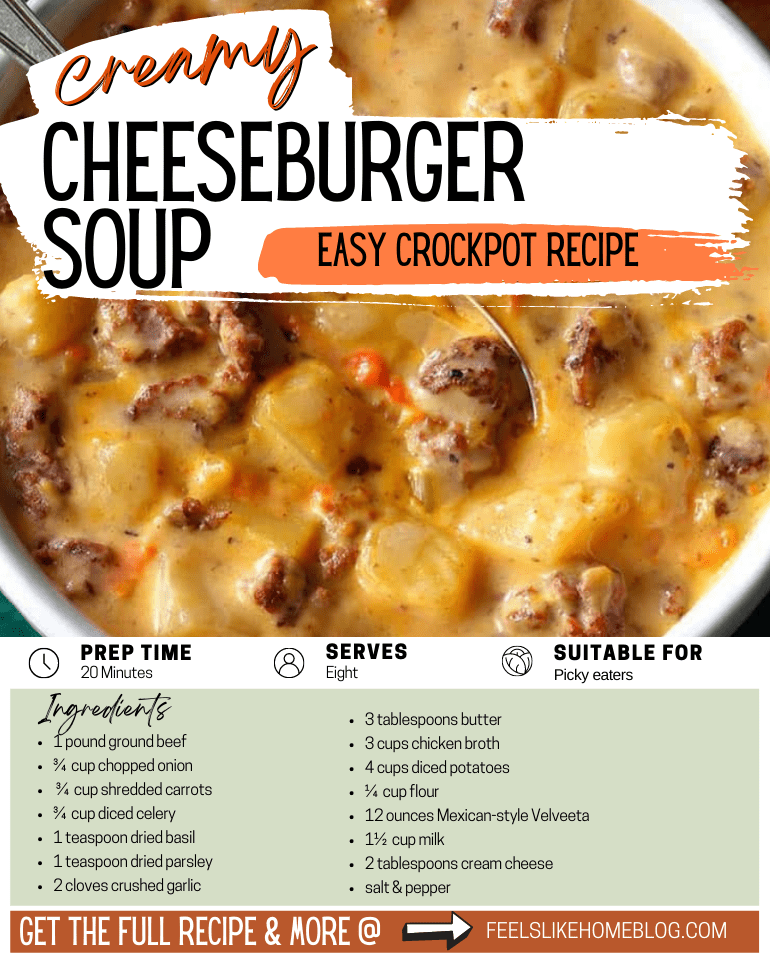 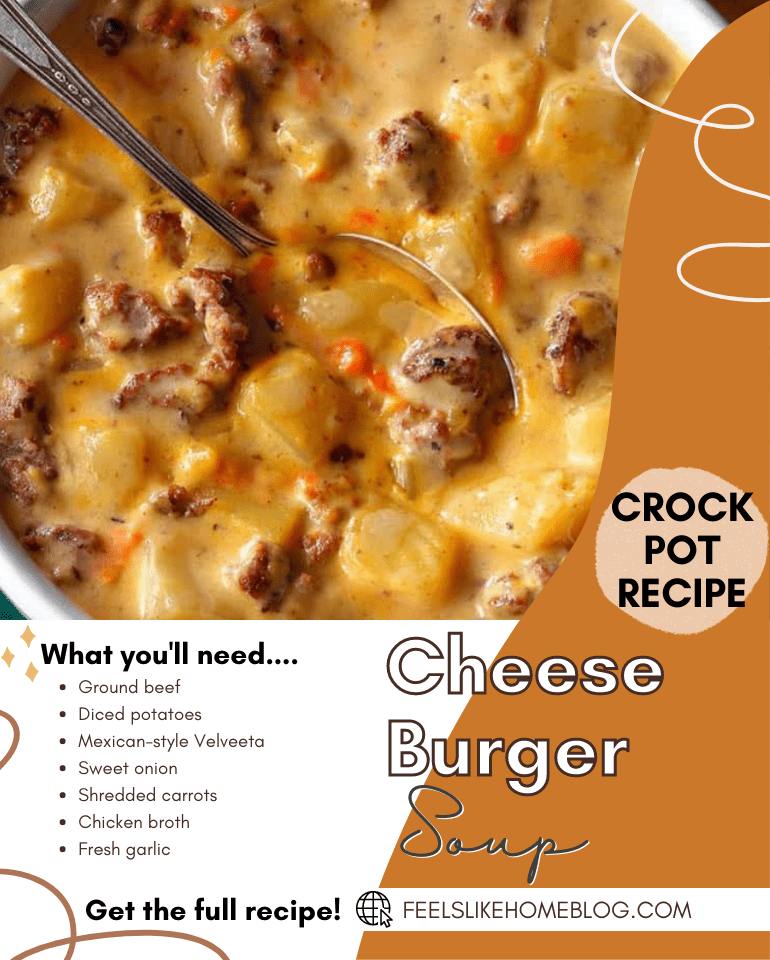 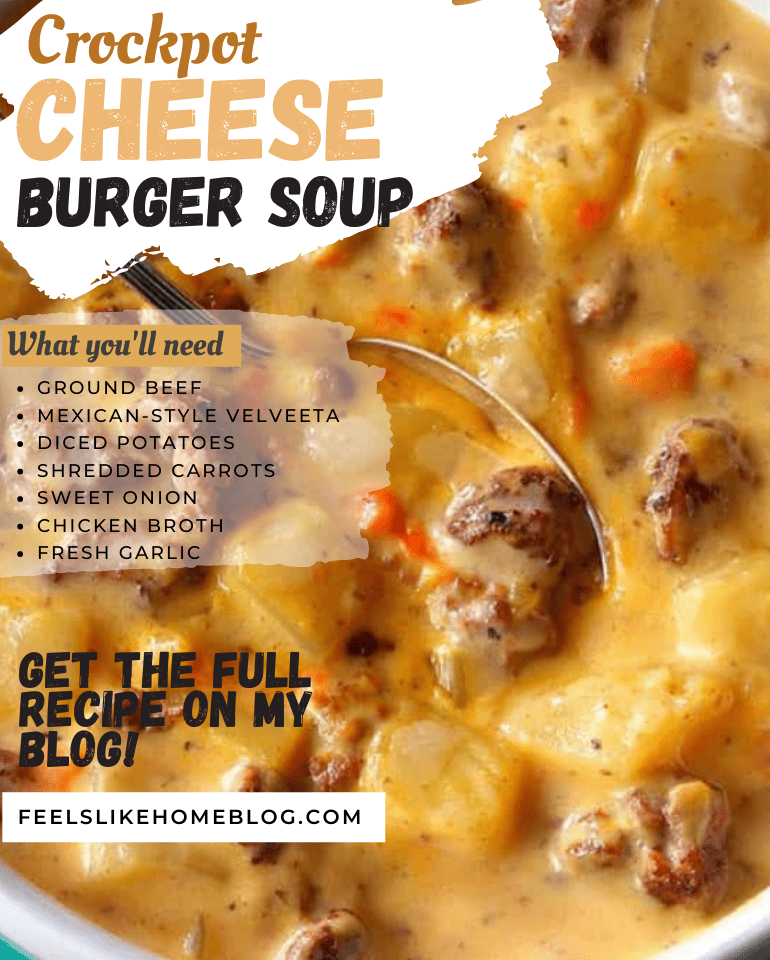 Slow cooker cheeseburger soup, originally from Taste of Home, is a rich and creamy, cheesy soup made with ground beef, potatoes, onions, and carrots in a Velveeta base with a mildly spicy kick. This Crock Pot soup is a huge hit and makes enough for a crowd.

My original cheeseburger soup recipe, based on an old Taste of Home recipe, has been the #1 recipe on my blog since 2017. It has been viewed 5 million times since I published it in 2009 and shared over 65,000 times on Pinterest.

The original cheeseburger soup recipe goes together pretty easily, but it still takes at least an hour to prepare.

I wanted to come up with a way to make cheeseburger soup take less time without sacrificing the flavors and texture that we all love so much.

The answer for me was the Crockpot.

I knew that I couldn't just plop all the ingredients into the slow cooker - the cheese and milk would curdle and make the soup gross. We've tried to make milky soups in the slow cooker before, and it never works out.

I made some adjustments to the recipe, changing the order of certain steps, so that the roux, milk, and cheese all get added in the end.

The original cheeseburger soup recipe is so rich and delicious, and this Crockpot version is just as good - and maybe better because it's easier and more hands-off to make.

No special equipment is needed for this recipe beyond standard kitchen tools. You'll use a vegetable peeler, sharp knife, a skillet, and of course, a Crockpot or other slow cooker.

How to make this Crockpot cheeseburger soup recipe

Tips for the best cheeseburger soup

Get the leanest ground beef you can. I buy 90% or 93% lean, depending on the store I'm shopping at (they don't all carry 93%). Make sure you drain the grease off after you brown it.

My favorite potatoes are Yukon golds, but they can get a little mushy in the slow cooker. I recommend that you use Russets instead, as those are a bit more firm. I would not recommend red potatoes in this recipe.

Velveeta makes all the difference. Velveeta makes this soup thick and creamy. As I have said above, it is possible to use shredded cheese, and the soup will still taste great, but it will have a thinner, runnier consistency.

Can you make cheeseburger soup on the stove?

You sure can! Head over here for stove top cheeseburger soup instructions.

Can you make cheeseburger soup in an Instant Pot or electronic pressure cooker?

You sure can! Head over here for Instant Pot cheeseburger soup instructions.

It's hard for me to imagine this soup being any better than it is - it is already superlative!!! - but there are some adjustments that people have tried and discussed on Pinterest.

Add toppings to your soup just before serving. There are some suggestions below, and it would be awesome to try one or a combination.

Cheeseburger soup reheats beautifully. Once it's totally cool, you can store it in an airtight container in the refrigerator for up to 3 or 4 days. When you want to eat it, you may need to thin it with a tiny bit of broth.

To freeze, let the soup cool to room temperature and then spoon it into zippered freezer bags. It will keep up to 3 months in the freezer. Thaw overnight in the refrigerator prior to heating in the microwave or on the stovetop.

Potato-based soups get a little weird after freezing and then thawing, so be aware of that. I do freeze it though if I've made too much. I deal with mushy potatoes than rather than throwing out spoiled soup.

Check out these other delicious soups, stews, and chowders while you're here:

This cheeseburger soup is the best soup you will ever eat, bar none. It is cheesy and hearty and thick and rich. Your whole family will love it! 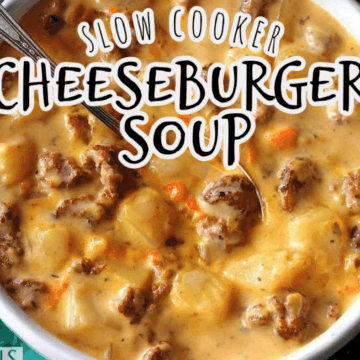 This website uses cookies to improve your experience while you navigate through the website. Out of these, the cookies that are categorized as necessary are stored on your browser as they are essential for the working of basic functionalities of the website. We also use third-party cookies that help us analyze and understand how you use this website. These cookies will be stored in your browser only with your consent. You also have the option to opt-out of these cookies. But opting out of some of these cookies may affect your browsing experience.
Necessary Always Enabled
Necessary cookies are absolutely essential for the website to function properly. This category only includes cookies that ensures basic functionalities and security features of the website. These cookies do not store any personal information.
Non-necessary
Any cookies that may not be particularly necessary for the website to function and is used specifically to collect user personal data via analytics, ads, other embedded contents are termed as non-necessary cookies. It is mandatory to procure user consent prior to running these cookies on your website.
SAVE & ACCEPT
1.4K shares