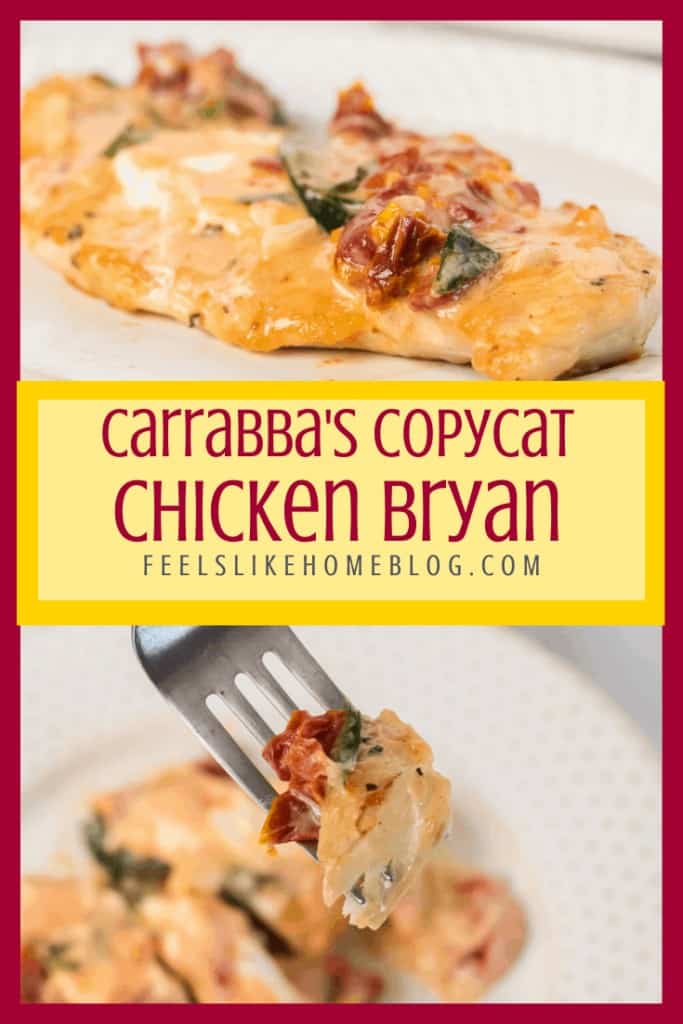 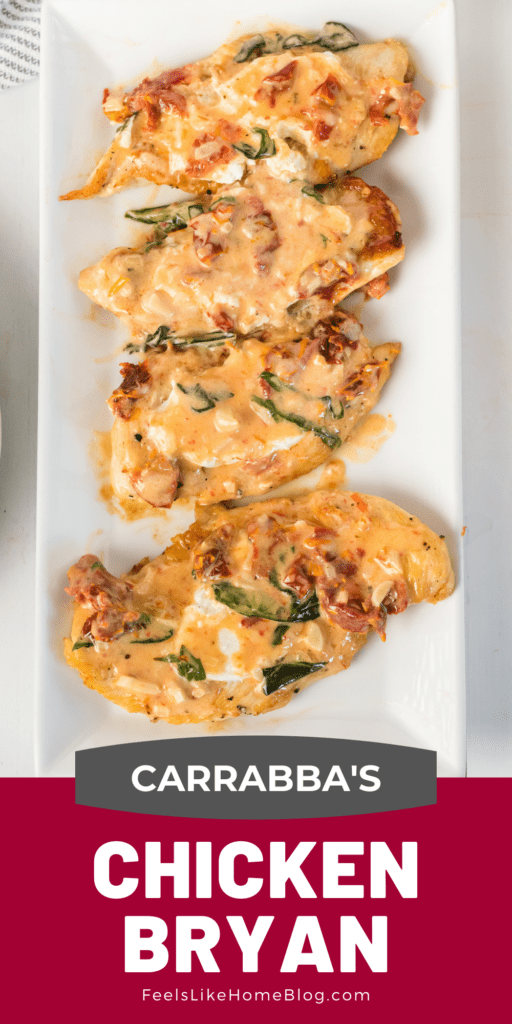 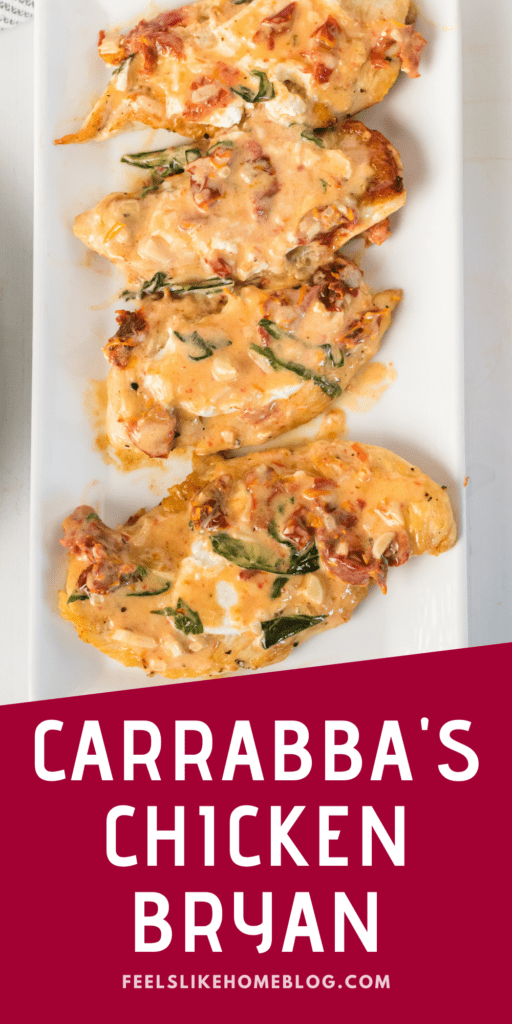 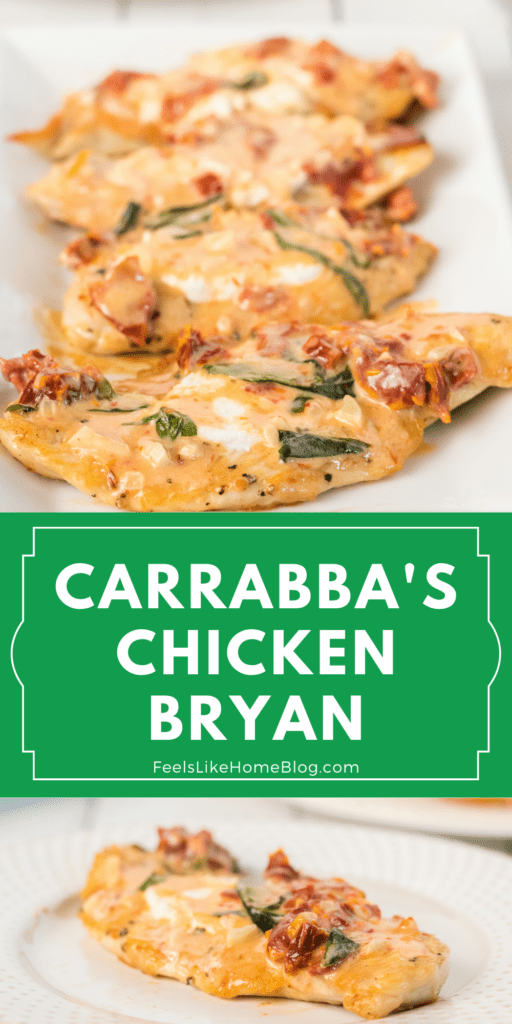 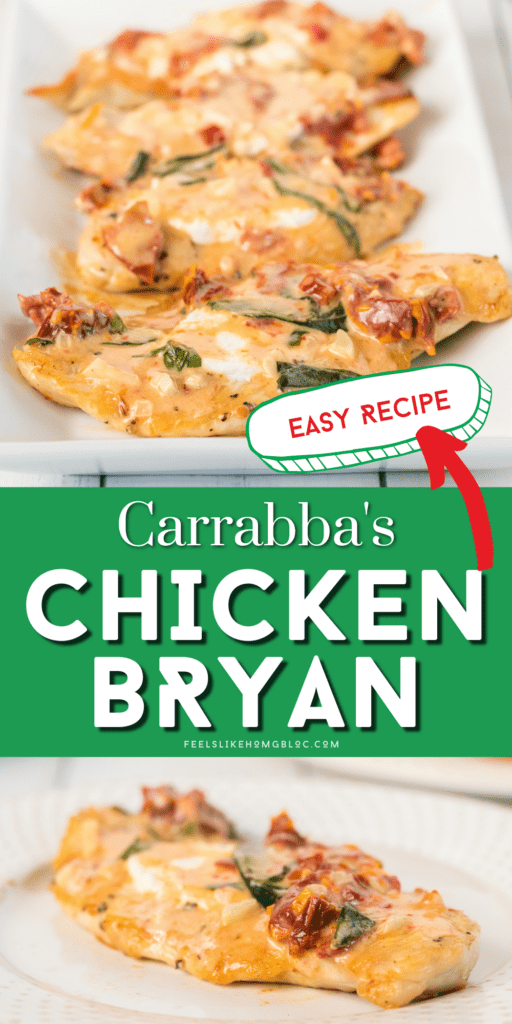 My favorite restaurant is Carrabba's, and I choose to go there for every birthday and anniversary and special occasion that I can manage. My favorite dish at my favorite restaurant is Chicken Bryan which is a grilled chicken breast topped with creamy goat cheese and tangy sun-dried tomatoes and smothered in a rich and tart basil lemon butter sauce. My mouth is salivating just thinking about it.

Let's get real for a second. Carrabba's is a pretty expensive restaurant, and we can't justify eating there outside of special occasions. So if I'm going to get Chicken Bryan more than a couple of times a year, I'm going to have to make it at home.

We have made Chicken Bryan in two ways, both really excellent. Grilling the chicken on the grill outside gives it a really nice, rich flavor that adds something to the dish. Realistically though, I would have to wade through my dining room garden, fight two cats who constantly try to escape, and then hope there's propane in the grill. Suffice it to say that the chicken breasts get cooked in a skillet more often than not, especially during the colder months of the year (when the plants can't be outside), and the dish turns out just fine that way too.

As I mentioned in the recipe, you will want to use chicken breasts that are on the thinner side. They will cook more evenly if they don't have thinner parts and thicker parts, and the dish will just turn out better. If yours are too thick, simply cut them in half longways or pound the thicker parts with a mallet to thin them out a bit.

Why this is the best copycat Carrabba's Chicken Bryan recipe

This copycat recipe tastes even better than the original, plus you know everything that's going into it, so you can rest assured it's healthy.

Chicken Bryan is impressive and makes a great presentation when company comes over, but it's simple and quick enough that you won't have to spend the evening standing over the stove.

The tangy flavors of the sun-dried tomatoes pair really well with the lemon butter to make a rich and powerful sauce that is unlike any other you've ever eaten.

This recipe cooks in less than 25 minutes.

How did Chicken Bryan get its name?

This recipe is a Carrabba's original, having been named by the Carrabba family after the town where they lived in Texas after immigrating to the US from Italy in 1890.

Chicken Bryan remains Carrabba's signature dish even today, and its cousin, Filet Bryan is just as good. You can find a copycat recipe for Filet Bryan here, but it's essentially the sauce from the recipe below, spooned over filet mignon instead of chicken breasts.

What You'll Need to Make the Best Chicken Bryan Recipe

You'll need two large skillets for this recipe, as well as measuring cups and spoons, a garlic press, and a citrus juicer.

How to Make Chicken Bryan at Home

Make sure you are using fresh basil. Dried just won't cut it in this recipe.

Make sure you use heavy cream in the sauce at the end. If you use a lower fat liquid (even whole milk), it will curdle when you add it to the lemon juice. Curdled sauce is still safe to eat, but it doesn't look as nice.

Don't be afraid to use extra goat cheese.

Make sure your chicken is really thin. Don't be afraid to pound it with a mallet to get it down under an inch.

This recipe is truly my favorite dish to have at home or in a restaurant. I can't explain just how good it is. You'll have to try it for yourself!

What to serve with Chicken Bryan

I love this sauce over pasta or zoodles, so I often serve it that way.

You can also serve it with crockpot mashed potatoes and spoon the sauce over those. YUM.

I also love to serve roasted asparagus with Chicken Bryan because the lemon butter sauce complements the sweet asparagus really nicely, too.

How to store Chicken Bryan

Chicken Bryan is best served fresh, but if you have leftovers, you can store them in an airtight container in the refrigerator for 3-5 days.

The sauce does not freeze well.

How to reheat leftover chicken

You can reheat the sauce in the microwave.

Reheating leftover chicken in the microwave makes the chicken weird, so I recommend reheating it in a skillet or in the oven.

To reheat chicken in a skillet, add just enough water to the skillet to coat the bottom. Heat the water over medium heat, until it begins to simmer (that means there are a lot of small bubbles). Cut the chicken into strips and add them to the water. Stir chicken around in the water and cook until heated through.

To reheat chicken in the oven, pre-heat the oven to 350ºF and remove the chicken from the refrigerator.

Once the oven is hot, pour enough water or chicken broth into a small baking dish to completely cover the bottom (about a half inch deep). Place the chicken into the liquid, cover the pan with aluminum foil, and bake until the chicken is hot. There's no need to measure the internal temperature as you've already cooked it the first time.

Here are a few other yummy chicken recipes you could try while you're here:

And take a look at these other copycat recipes: 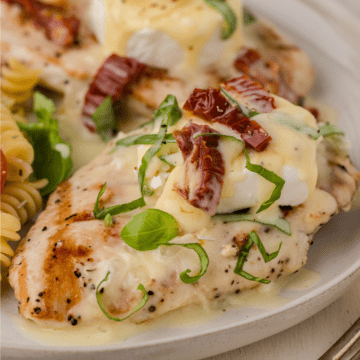 We like to serve this dish with a side of pasta, just like they do at Carrabba's. As a bariatric patient who avoids carbs, I eat mine with zucchini noodles cut with a spiralizer. We like to spoon some of the extra lemon butter sauce over the noodles. It's so good that way! 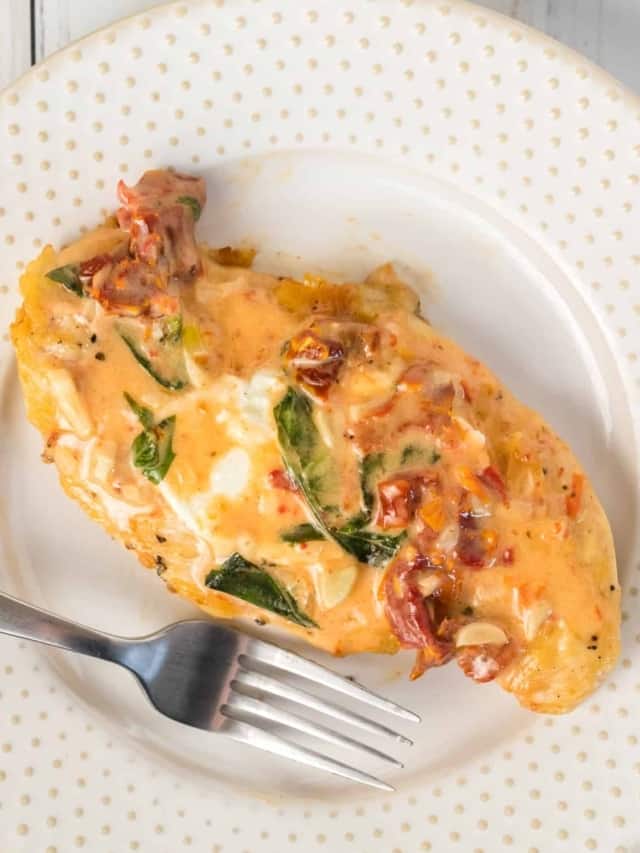