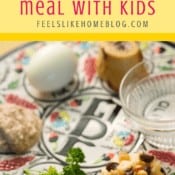 Back in 2015, I published a post on the Christian Passover meal my family had had with friends the year before, when our girls were 3 and 6. I thought it was a beautiful expression and observance of our shared heritage with the Jewish faith - the liberation of the Jews from slavery in Egypt.

In 2021, I came under fire from a small group of very vocal Jews who felt my Christian Passover was deeply upsetting. They left hateful comments on Twitter and here on this post (which I promptly deleted).

Not one to be bullied into actions I do not believe in, I stewed on the controversy for a few days. During that time, I spoke personally (via text, phone, and email) with a dozen Jewish friends. Before each conversation, I told them that I would not publish anything they said and I asked them to give me complete honesty and forthrightness.

My friends' opinions on my Christian Passover ran the gamut from "This is an offensive example of cultural appropriation." to "As long as you're not trying to convert me, do whatever you want."

I liked my Christian Passover meal. My kids liked it. The food was amazing, and Jesus was present in the details. It was really hard to accept that - at least for some Jews - what I thought was a beautiful acknowledgement of a shared custom was more like stealing a sacred ritual and mainstreaming it for my own purposes.

I reflected on these conversations over a period of a few days, and I made the decision to remove most of the original post including the part where I linked Jesus with the Passover.

I want to be clear: my decision had nothing to do with the bullies. It had everything to do with thoughtful conversations with my friends and one stranger whose comment I published below. One thing came up in those conversations over and over: "If you want to celebrate Passover, do it. But it's pretty offensive if you take OUR holiday and make it about YOUR Jesus."

If you want to hold a Passover seder, please find yourself a Jewish version. (Here's one I found from a Jewish website.) I am not Jewish and don't feel qualified to offer you one myself. If you do decide to do a seder, stick to the holy and time honored traditions and don't try to make it about Jesus.

If you want to add something to your Easter week that your kids will enjoy and learn from, have a Maundy Thursday observance during Holy Week. I have included some suggestions for that below.

So all that to say that I have taken down my Passover script where I drew a correlation between the Jews' liberation from Egypt with the Christian belief that Jesus liberated us from sin.

6 Ideas for Replacing a Christian Passover with Maundy Thursday

While you're here, check out 16 Simple Lent Activities for All Christian Kids and What is Lent and Should We Observe It? Even if it's just a few days before Easter Sunday, it's not too late to get in a little sacrifice and quiet reflection to honor Lent as well.