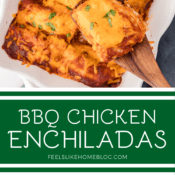 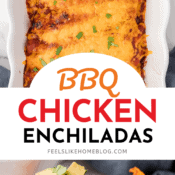 These BBQ chicken enchiladas are my family's favorite because they're loaded with chicken smothered in sweet BBQ sauce and spicy enchilada sauce and topped with generous amounts of cheese.

While I was writing a blog post recently, Joe asked me what we should have for dinner. It was late in the day, and we needed something quick and easy.

I suggested BBQ chicken enchiladas, knowing that we had everything required. Joe thought they sounded good, too, so he got to work.

And then he realized that we didn’t have any enchilada sauce, only taco sauce.

Rats. The recipe was already started.

Instead of bagging the whole thing (my mouth was watering for BBQ chicken), I found a recipe for enchilada sauce on AllRecipes.com. Fortunately, we had everything we needed for that recipe, so Joe’s enchilada preparation continued.

When those enchiladas came out of the oven, they were gorgeous.

Then we tasted them.

These were the most delicious enchiladas I have ever eaten, and I really like enchiladas.

Oh my goodness delicious. The sweet BBQ sauce flavor combines with the slight spice of the enchilada sauce for a whiz bang explosion in your mouth. These enchiladas are the real deal.

What you'll need to make the best barbecue chicken enchiladas

You'll need a baking dish to make this recipe. I prefer a deep 9"x13" but any rectangular dish will work. You'll also need a garlic press or sharp knife to mince the garlic by hand, as well as standard measuring cups and spoons.

See recipe card at the bottom of the page for all measurements and additional ingredients notes.

What about the enchilada sauce?

The homemade enchilada sauce takes about twenty minutes to prepare with oil, flour, chili powder, ground cumin, chicken broth, tomato sauce, and a few other spices, and it will make your enchiladas so very delicious.

We like the homemade sauce so much that we never buy the canned stuff anymore. Only homemade will do around here.

How to make the best BBQ chicken enchilada recipe

These enchiladas are amazing as is, but you could try any of the following variations to give it a little something extra:

Mix in corn kernels, black beans, or diced tomatoes with the chicken.

Sauté up some diced onion and diced bell pepper, and mix that in with the chicken.

Top the whole thing with pico de gallo or diced tomatoes, diced onions, and diced jalapeños after it comes out of the oven.

Use corn tortillas in place of flour tortillas (this is a perfect gluten-free option - also be careful and make sure you get a gluten-free BBQ sauce and use gluten-free flour when you make the enchilada sauce).

Keep the enchiladas in an airtight container in the refrigerator for up to 5 days.

I've never tried freezing them, but I imagine you could. I would recommend wrapping the enchiladas in plastic wrap then aluminum foil, then putting the whole package into a plastic freezer bag or airtight container. They should keep about 2-3 months in the freezer. Thaw overnight in the fridge before popping into the oven at 350ºF for about 15 minutes. The tortillas will likely be a little soggy from being frozen, but the enchiladas should taste just fine. You may want to have a little extra enchilada sauce mixed with BBQ sauce to refresh them before you put them into the oven. (Enchilada sauce freezes really well, check out that recipe for those instructions.)

How to make BBQ chicken enchiladas low carb and bariatric-friendly

To make this recipe bariatric-friendly, I measure out 4-5 ounces of the filling and top it with the BBQ enchilada sauce and shredded cheese, then microwave it until warm. After it's heated, I sprinkle it with diced avocado and eat it just like that. I don't eat the meat that's been wrapped in a tortilla.

To make this recipe low carb (and another option for bariatric eating), use a sugar-free BBQ sauce and wrap the enchiladas in zucchini sliced thin (and parboiled so they're pliable) or another low-carb wrap of your choice. They're not going to get crispy if you use zucchini, but they should stay wrapped pretty well.

Try these other Mexican-inspired dishes while you're here: 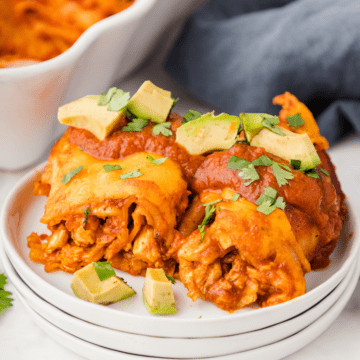 For a bariatric portion, I reserve 5 ounces of the BBQ chicken enchilada mixture from the tortilla wrapping process, and I eat that portion of chicken topped with ½ ounce of shredded cheese, an extra spoonful of the BBQ enchilada sauce, and ½ avocado.
Keyword bbq, chicken, enchiladas
Tried this recipe? Pin it for later!Follow @FeelsLikeHome or tag #FeelsLikeHomeBlog!
FacebookMessenger13PinterestTwitterWhatsAppEmail
13
SHARES