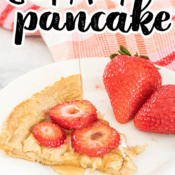 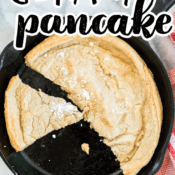 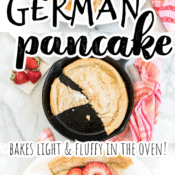 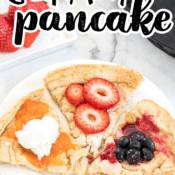 Whether you call it a German pancake, a Dutch baby pancake, or a popover pancake, this quick 15 minute breakfast is easy to prepare with eggs, milk, flour, and vanilla and has light and slightly sweet flavors. Easy to customize with fruit or savory toppings.

My daughter, Allie, takes a cooking class with Chef Ali Caldwell from San Diego every Saturday. She has learned all manner of cooking techniques (and I have learned quite a few as well!), and the food is always healthy and made from scratch. One of the recipes we learned from Chef Ali this spring was the German pancake or Dutch Baby.

Chef Ali told us to top our German pancakes with powdered sugar and a sprinkle of fresh lemon juice, and that is a delicious way to eat them, but we have made them several times since, and I prefer fruit toppings instead. I especially like a smear of cherry preserves or fresh berries on mine, and of course we always end with a dollop of real whipped cream.

You could eat German pancakes with the traditional American topping of butter and warm maple syrup, and that would also be delicious because they are just that good.

I have also seen German pancakes topped with savory, crepe style toppings, like scrambled eggs and chopped bacon smothered in cheese sauce, but I can't vouch for that because I've never tried it. If you intended to make yours savory, I would omit the sugar.

What are German pancakes?

German pancakes, also called Dutch babies or Hootenanny, are baked pancakes made from flour, butter, sugar, eggs, and milk, with a few other ingredients for a richer flavor. They are baked in a cast iron skillet in the oven, and they puff up like a popover while cooking but fall when they hit the cooler, room temperature air.

How to make German pancakes

How to serve German pancakes

These pancakes are delicious, but don't get me wrong - they are not a full meal. This is a very light and lovely pancake, and topped with fruit, it is a great complement to a protein. I recommend eggs, cooked your favorite way, and maybe a slice or two of bacon to go with the pancake.

No, not really. The origin of German pancakes can be traced back to Seattle in the early 1900s.

If German pancakes are not from Germany, are Dutch babies really Dutch?

Again, nope. Dutch babies get their name from the German word for German, deustch. It sounds like the English word Dutch, so when English-speaking Americans heard German immigrants say that something was deustch, they incorrectly assumed the word meant Dutch. Where I live, there is an entire culture called Pennsylvania Dutch - and it is 100% German.

So, Dutch babies are exactly the same thing as German pancakes, and they come from Seattle, Washington, not Germany or the Netherlands.

We love pancakes at my house, and we make a big variety of them. The first recipe below (apple pecan pancakes) is baked in the oven, similar to German pancakes, but it does not puff up like a popover. It has a texture similar to a traditional fluffy pancake cooked on a griddle. All the rest of the recipes below are more traditional, being cooked on a griddle on the stovetop. 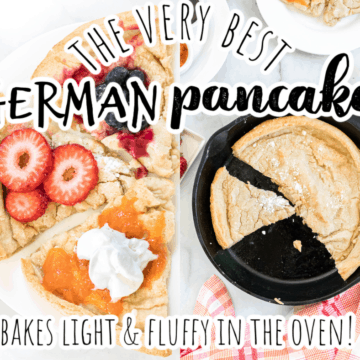 Serve with your choice of topping. Some people use butter and warm maple syrup, but my kids and I I prefer fruit such as a cherry preserves, fresh berries, sliced peaches, or fried cinnamon apples and topped with whipped cream.