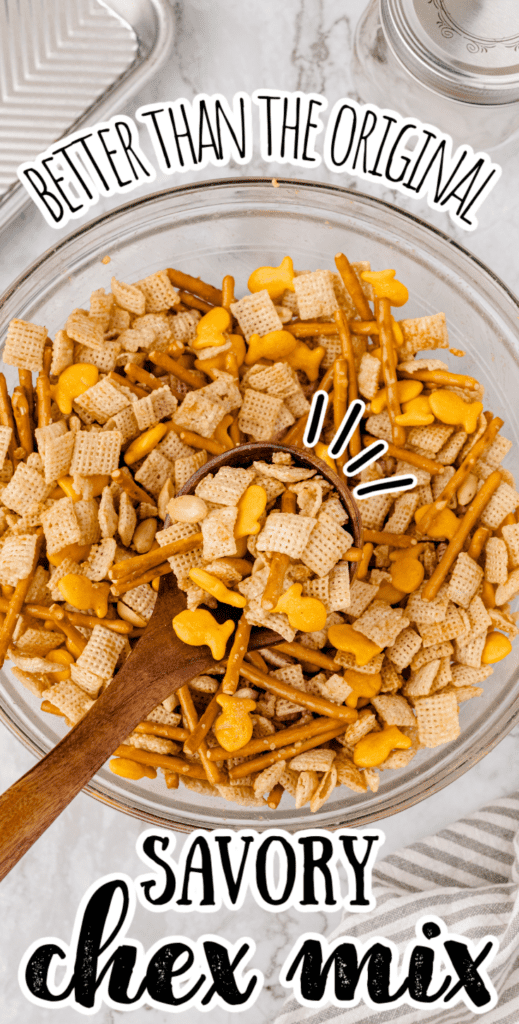 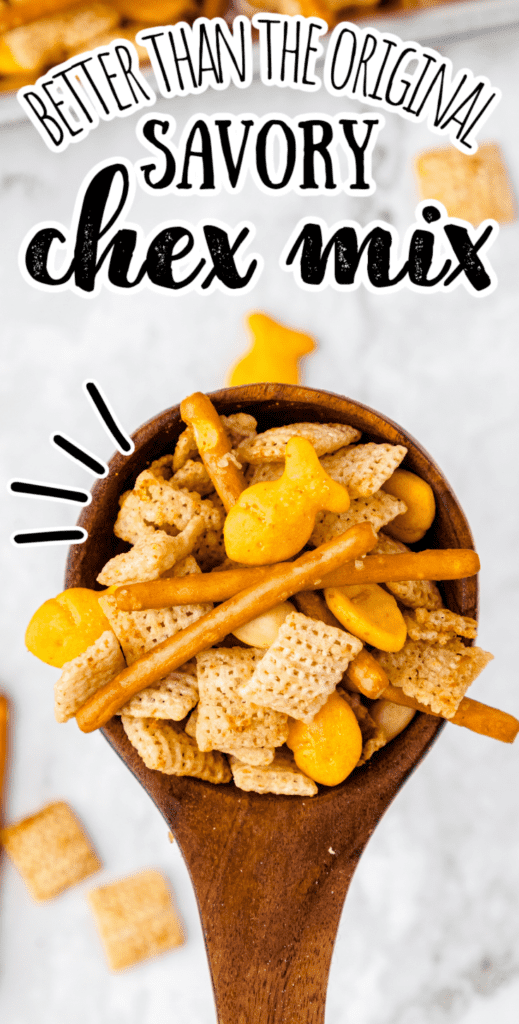 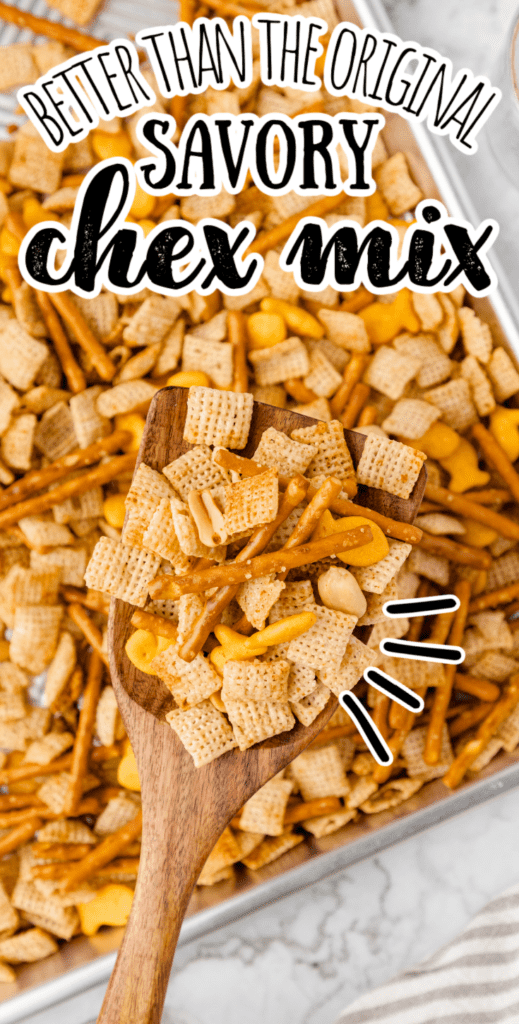 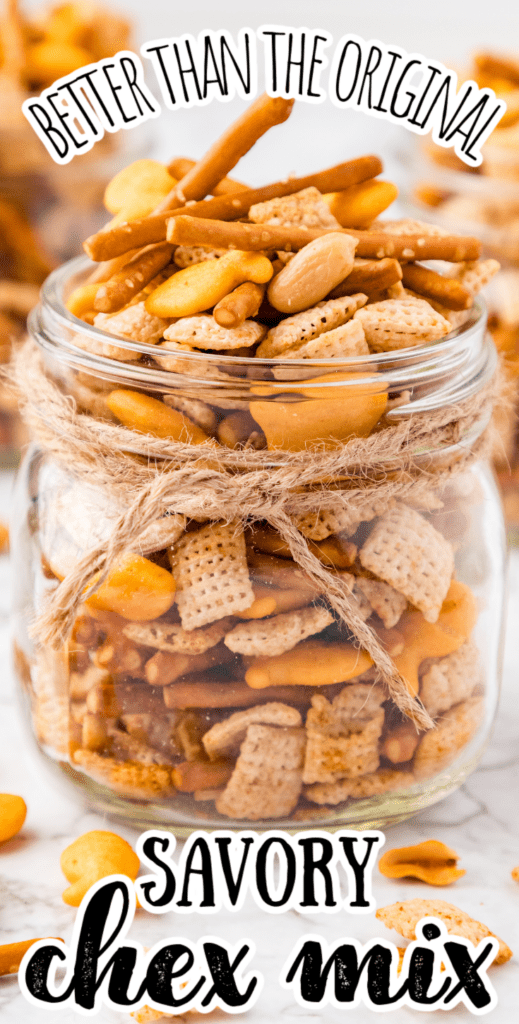 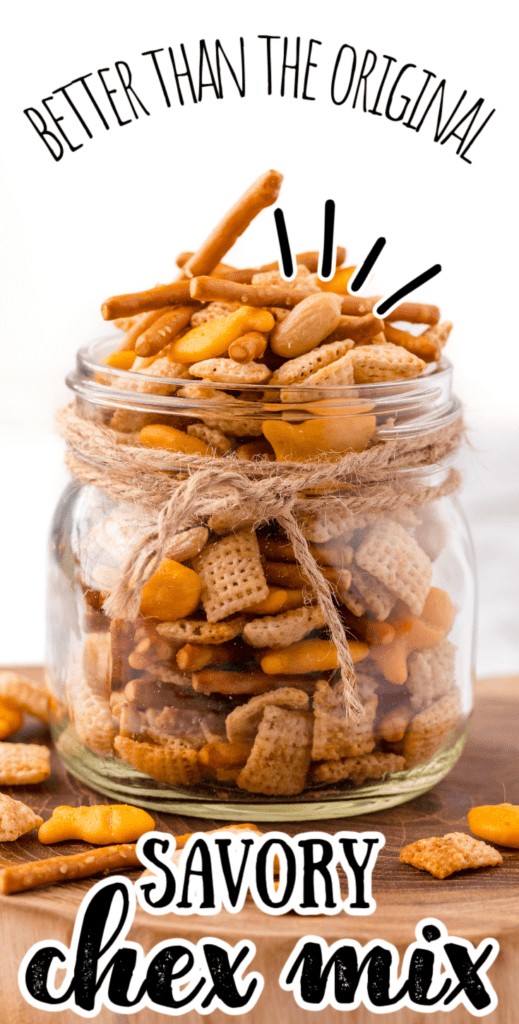 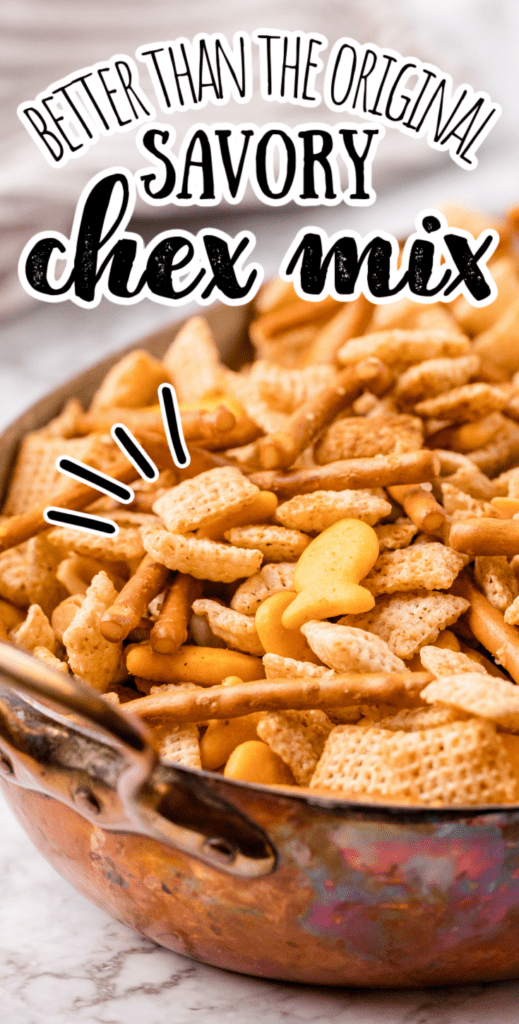 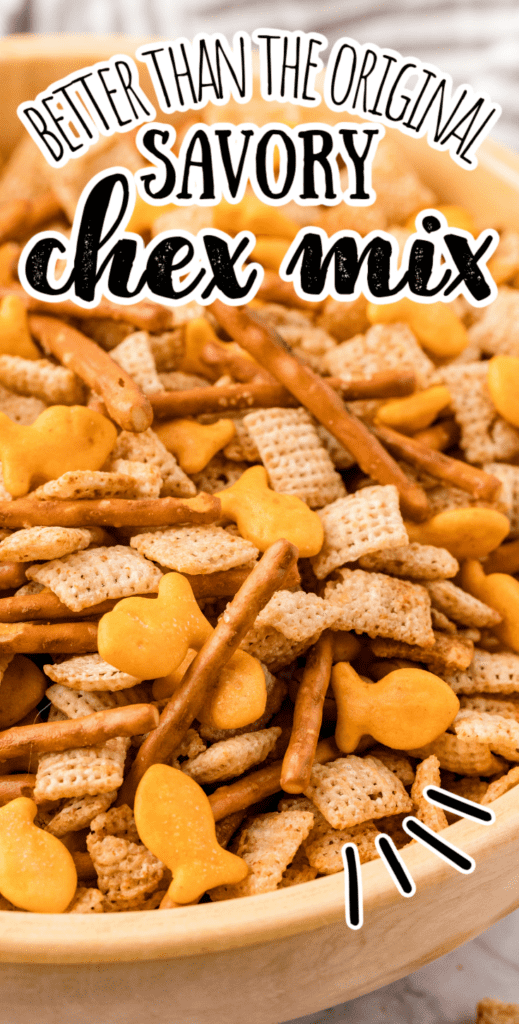 How to make the best savory Chex Mix. This simple and easy recipe is the original healthy traditional homemade snack mix with cereal, pretzels, and nuts. Baked in the oven.

At a friend's house this evening, Grace discovered that she likes Chex Mix.

I've never been a fan, so she didn't have to worry about me nibbling from her bowl.

I wonder if that was part of its charm.

At any rate, I poured Grace a bowl of Chex Mix (the premade Chex Party Mix kind, in a bag), and she immediately picked out all of the Chex and left the pretzels and crackers behind.

I told her that they're a kind of cereal, and that you can eat with milk or as a snack.

Can my have more of the little crunchy things?

Have you ever tried explaining Why not? to a 2-½-year-old who wants you to pick the cereal bits out of a friend's bag of Chex Mix? It doesn't compute.

She was begging for a healthy food. No sugar involved. How often does that happen?

When we got home, I looked up the recipe for Chex Mix, tweaked it, and gave Joe a shopping list.

We made our Chex Mix almost entirely out of Chex because that's what Grace likes. Most people put in pretzel sticks and crackers such as Cheeze-Its, Goldfish Crackers, or oyster crackers. You can use those if you want.

This recipe is great to package up in a pretty box and give as a gift. It's also perfect for a game day or movie night snack. And, as I said above, it's perfect to set out when you have friends over.

Kids love savory Chex Mix as an after school snack, and it's awesome to nibble on while you're preparing holiday meals like Thanksgiving, Christmas, New Year's, and Easter.

The reason that Chex Mix is so perfect is that it doesn't need to be refrigerated or kept warm, so it's safe to sit at room temperature all day.

For the most part, it is healthy being that it has only a small amount of butter and no sugar. It is naturally vegetarian, low fat, and low calorie.

If you use Rice Chex and Corn Chex only and carefully choose your add-ins, it can be gluten free.

If you replace the butter with coconut oil, it can be dairy free.

If you choose a Worcestershire sauce without anchovies (read the label) and use coconut oil instead of butter, it can be vegan.

If you stick with peanuts, it can be tree nut free.

If you use cashews or almonds, it can be peanut free.

Get the picture? This recipe can easily be adapted to almost any diet and allergy need.

Is Chex Mix better for you than chips?

It absolutely is! Chips are typically deep fried in oil, and Chex Mix is coated in a very small amount of melted butter. It's much healthier and has fewer calories.

What is savory Chex Mix made of?

Then you toast it in the oven until it's nice and crispy.

For a cheesy Chex Mix, add ½ cup Parmesan cheese to the cereal mixture before tossing it in the butter mixture.

For Tex-Mex Chex Mix, add 1 tablespoon of taco seasoning or fajita seasoning to the butter mixture.

Stick with unsalted butter! There will be plenty of salt in the recipe from the Worcestershire sauce, seasoned salt, and all those crackers and pretzels. You definitely don't want to add extra!

Stir the mix every 15 minutes while it's in the oven. This helps to prevent it from sticking to the pan and burning, and it also helps everything to toast evenly.

Use multiple flavors of Chex to make your mix. The most popular varieties are wheat, corn, and rice, and the finished mix is really tastiest if you use a combination of all three.

Add fresh herbs just before serving. Fresh herbs like parsley, thyme, and rosemary will make your Chex Mix sing, but they will cook to nothing if you add them before baking. Toss them with the mix after it's cooled for the best flavor.

My better than the original Chex Mix recipe makes a smaller batch than most other recipes, so there typically aren't a lot of leftovers. But if you do have some, simply store them in an airtight container like Tupperware or a zippered plastic storage bag. It will stay fresh at room temperature for 2-3 weeks or in the freezer for 4-6 months.

Try these other snack recipes while you're here: 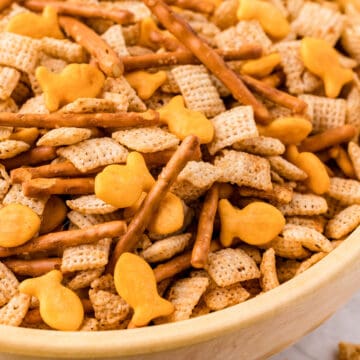 How to Make Chex Mix

This website uses cookies to improve your experience while you navigate through the website. Out of these, the cookies that are categorized as necessary are stored on your browser as they are essential for the working of basic functionalities of the website. We also use third-party cookies that help us analyze and understand how you use this website. These cookies will be stored in your browser only with your consent. You also have the option to opt-out of these cookies. But opting out of some of these cookies may affect your browsing experience.
Necessary Always Enabled
Necessary cookies are absolutely essential for the website to function properly. This category only includes cookies that ensures basic functionalities and security features of the website. These cookies do not store any personal information.
Non-necessary
Any cookies that may not be particularly necessary for the website to function and is used specifically to collect user personal data via analytics, ads, other embedded contents are termed as non-necessary cookies. It is mandatory to procure user consent prior to running these cookies on your website.
SAVE & ACCEPT
3.5K shares