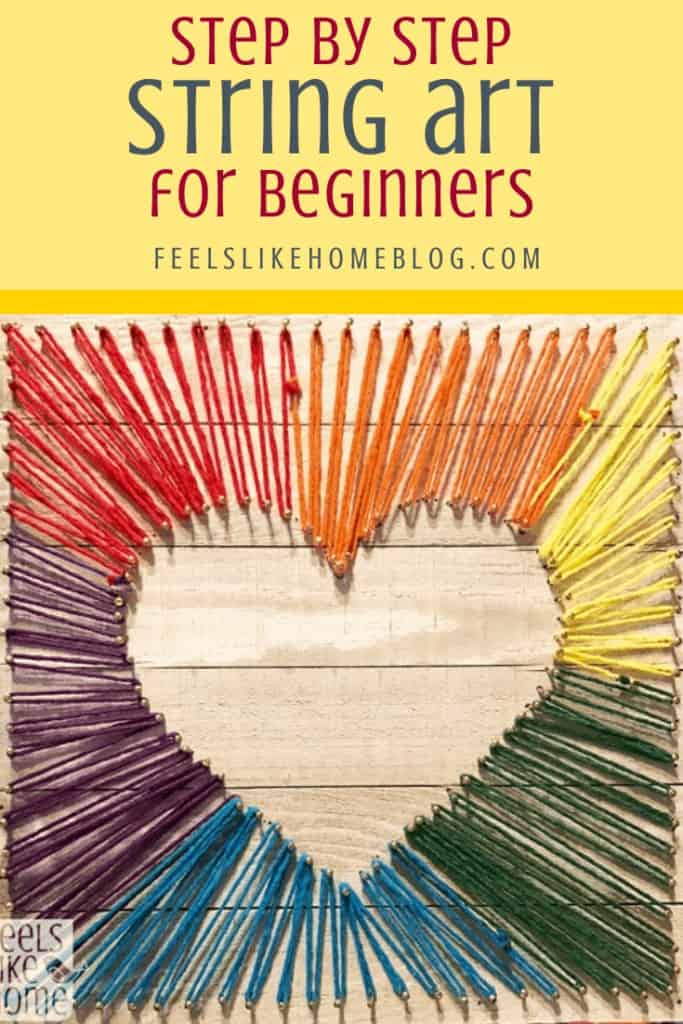 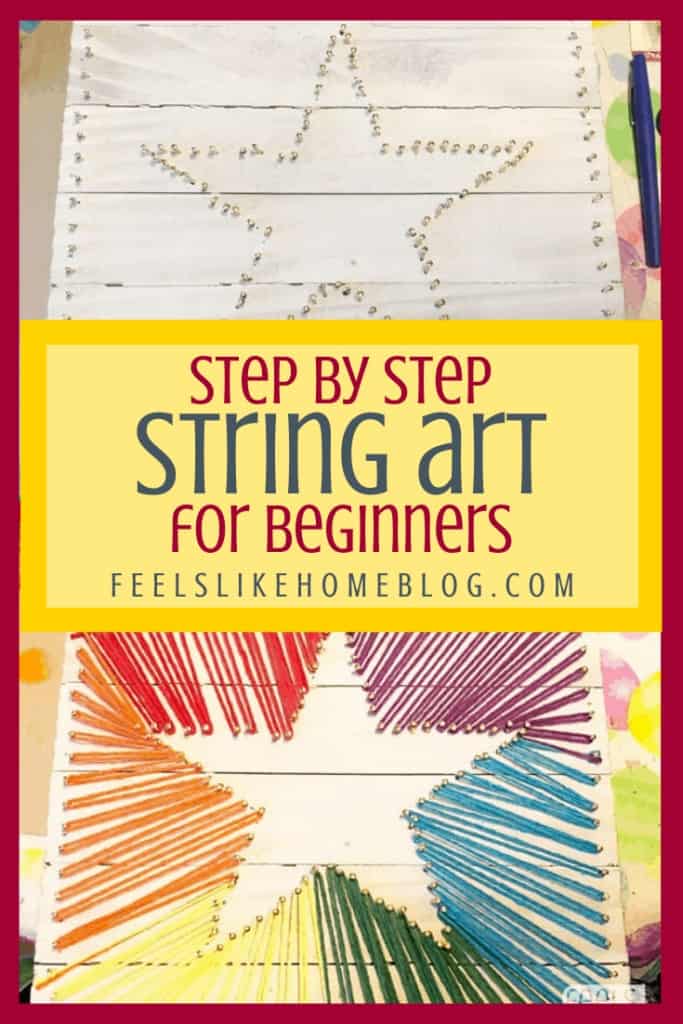 How to make easy string art for beginners - This simple step by step tutorial shows how to DIY string art with nails and yarn, cords, or twine (embroidery thread doesn't look as nice). Includes patterns and ideas and can be made by kids or adults.

A couple of weeks ago, I posted this picture of my string art on Instagram:

I was more or less happy with the outcome, but the project had taken me literally half my life to complete. I asked for help, suggestions, tips, encouragement, anything my friends and followers had to offer. Between Facebook and Instagram, I got a lot of advice, some of which I will share with you below.

In my Instagram post, I said that I didn't think I had another string art project in me, but I already had all the materials, and Allie was asking me to make one for her (the heart above was for Grace), and I have a tremendous amount of mom guilt over Grace sometimes getting preferential treatment, so there was no doubt that I was going to try a second time.

The very next day.

I guess this was good in a way because I used all the tips and suggestions and wisdom from my friends right away and learned the wrong way to go about it and did everything opposite the second time.

The second string art project actually went pretty well and, while I do not believe I will ever come to enjoy hammering nails into wood, I would (haha) be willing to give another project a go.

First things first. I have some advice on materials.

I got a really cute wooden panel at Walmart in the craft section. It was solid on the front (as you can see above and below) but open on the back. This was a problem because it was super difficult to get the nails to go in to the center open part. Around the edges, no problem. But the center part where there was nothing solid underneath? A major PITA.

Go for a solid piece of wood for your project and skip this cute nonsense. Or better yet, get the cute wood and use it for something else.

Of course, if you use wood from the home improvement store, you will want to stain or paint it first to make it look nice. This adds time and effort, but I know you can handle it, my crafty friend. I have confidence in you. Get some spray paint if you don't feel like messing around with a brush.

*See the paragraphs immediately above for advice on materials.

6. Remove the pattern and begin hammering your nails in. I started in the center and worked my way to the outside, doing the ring around the outside last.

7. It is easiest if you use flat jewelry pliers or needle nose pliers to hold the tiny nails. It is easy to get them crooked, so the jewelry pliers make a big difference in keeping them mostly straight.

8. BUT as you can see below, it is not absolutely critical that all the nails are straight. Mine are pretty wonky most of the way around, and my finished product is still beautiful. So don't worry too much if yours look like mine.

9. Also don't worry if your nails get off of the dots a bit. Sometimes, I discovered that my dots were a little too close together to make stringing work, so I shifted. You can probably see a few dots in the photo below, but you cannot see them in the finished string art because they are all covered up by the yarn.

10. Begin stringing the yarn by tying it to a nail. I always started and stopped in the outside ring, just to make it easy on myself. Tie the yarn like you're tying your shoes (this is called a square knot when you tie it twice together I think). Be sure to do it twice so that it doesn't come unraveled later.

11. Now just string the yarn back and forth between the nails on the outside and the nails on the inside. Note that you can't just go one for one all the time, especially around the points of the star. You will sometimes have to wrap two outside nails around the same inside nail or two inside nails around the same outside nail. Just do your best to keep each section going together and not out of sync.

If you need additional guidance on this step, look at the finished string art photos above and below to see how I did it. You can see especially in the green section where the yarn is much thicker in some places; that's because I wrapped it more than once around that nail.

Allie needed a little guidance of what to wrap and when, but she easily completed the stringing on her star. She was very happy to have done it herself.

Those would be eye liner stars on her cheek. She and her sister were making each other look festive.

To change colors, cut the current color of yarn and tie it in a square knot around an outside nail. Then tie the next color onto the same nail and keep going around.

When you're finished, trim the tied ends close to the knots.

**Note on tying the knots. When I was wrapping the yarn for the heart at the very top, I used a crochet knot called a magic knot, and I hate the way it looks. You can see the obvious knots in the middle of the strung sections. I think you can't see the knots as obviously in the star. So definitely don't tie the yarn colors together. Just tie knots around nails.

This is what our star looked like when we were finished. As I said above, you can tell where I wrapped more than once because the yarn looks significantly thicker in those places.

Allie was thrilled with her star and hung it next to her bed.

Have you ever attempted string art?

If you have any string art tips for beginners that I may have missed, be sure to leave them in the comments below.

This website uses cookies to improve your experience while you navigate through the website. Out of these, the cookies that are categorized as necessary are stored on your browser as they are essential for the working of basic functionalities of the website. We also use third-party cookies that help us analyze and understand how you use this website. These cookies will be stored in your browser only with your consent. You also have the option to opt-out of these cookies. But opting out of some of these cookies may affect your browsing experience.
Necessary Always Enabled
Necessary cookies are absolutely essential for the website to function properly. This category only includes cookies that ensures basic functionalities and security features of the website. These cookies do not store any personal information.
Non-necessary
Any cookies that may not be particularly necessary for the website to function and is used specifically to collect user personal data via analytics, ads, other embedded contents are termed as non-necessary cookies. It is mandatory to procure user consent prior to running these cookies on your website.
SAVE & ACCEPT
46.7K shares