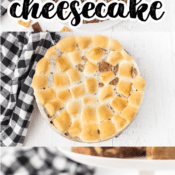 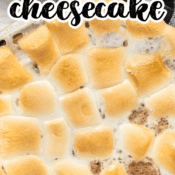 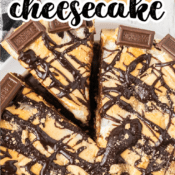 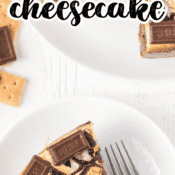 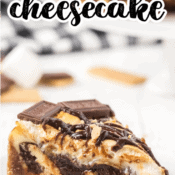 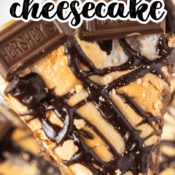 This is the best easy s'mores cheesecake! A smooth and creamy cheesecake filling is stuffed with rich chocolate and gooey marshmallows, with a crunchy graham cracker crust. It's going to be your new favorite dessert.

On Wednesday, while Grace was taking a nap (she's been quite sick), Allie and I made a s'mores cheesecake to bring some of our favorite flavors together.

I had a new cheesecake recipe to try out, and we haven't had a campfire in a while to get our s'mores fix, so it seemed like a good combination.

Was it ever a good combination! That is the understatement of the year.

Every bite of this rich cheesecake was loaded with the sticky goodness of marshmallows and the rich sweetness of homemade hot fudge, and it was - dare I say it? - way better than a regular old s'more cooked on the campfire.

I'm not even kidding.

This particular cheesecake recipe has a lot of ingredients, but it comes together fairly easily once you have everything gathered.

4-year-old Allie was a big help to me in measuring and putting the ingredients together. The only thing she couldn't help with was the hot fudge sauce, as that was made directly on the stovetop.

This s'mores cheesecake is so sweet and so decadent that you won't be able to eat more than a small slice. I actually cut myself a big old hunk and had to put half of it back in the fridge for later.

What you'll need to make an easy s'mores cheesecake

You will of course need a springform pan as you would to make any cheesecake.

You will need either a blender or food processor to crush the graham crackers. If you have neither, you could put the crackers into a large zippered plastic bag and use a rolling pin to crush them. It takes longer, and the pieces won't be as uniform, but it will work.

Finally, you will need either a stand mixer or an electric hand mixer to mix the cheesecake filling. A stand mixer is easier, but they are big and heavy, and I don't have the space to keep mine on the counter all the time, so I tend to use my hand mixer just because it's easier than lugging the KitchenAid out of its hiding spot and making room for it on the counter.

Could you mix this cake with a spatula? Yes, I suppose that you could. However, it would be difficult to mix and take a long time. Hand mixers are pretty cheap. Get one if you don't already have one.

How to make an easy s'mores cheesecake

Do I need a springform pan for this cheesecake?

Is a water bath necessary for this cheesecake?

Some recipes will tell you that a water bath is essential for baking a cheesecake. They claim that a cheesecake baked without a water bath will be dry, overly dense, or cracked. I have not found this to be the case with any cheesecake I've ever baked.

I personally think that water baths are risky because, if you don't get the springform pan wrapped tightly enough, the water will leak in and ruin your crust. I had that happen several times in my early cheesecake baking days.

After giving up on the springform-pan-in-the-water water bath, I used to put a pan of water on the rack below the cheesecake, allowing the steam to fill the oven. However, one time I forgot to do it, and guess what! The cheesecake was awesome. So now, I never use one because I have found that it is just not necessary. Why do the extra work if you don't need to?

Why did my cheesecake crack?

The most common reason for a cracked cheesecake is over beating the filling, resulting in an excess air in the batter. Extra air is the enemy of a cheesecake because it makes the filling puff up in the oven, and then it cracks as it cools and sinks.

Even if you use a paddle attachment or the beaters, you could still add too much air if you beat and beat and beat the filling. So, never mix more than is absolutely necessary.

If you aren't sure if you've beaten it long enough, turn off the mixer and use a spatula to turn the filling over a few times and look for pockets of unmixed ingredients. If it's evenly mixed, don't beat any more.

One good thing about this cheesecake is that you're going to cover it with marshmallows, so even if it does crack, no one will know.

Use quality ingredients - Try to stick with the name brand ingredients, because the quality of your ingredients will make a huge difference in your finished cheesecake.

Keep the oven door closed - Don't peek at your cheesecake while it's baking. The cold air can shock the cheesecake and make it crack.

Likewise, when the cook time is done, and you've jiggled it to make sure the edges are set, put it back into the hot oven with the door cracked an inch or two, and let it cool in there for an hour. This also helps to prevent cracking.

Don't over bake - Don't over bake your cheesecake. Turn the heat off and crack the door open as soon as the outer edge is set. The center should be jiggly.

Try these other delicious cheesecake recipes while you're here: 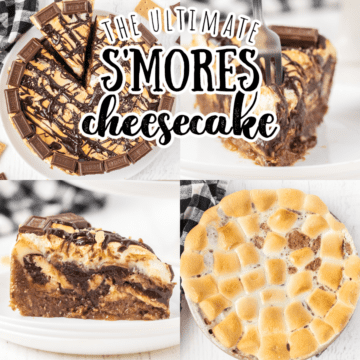