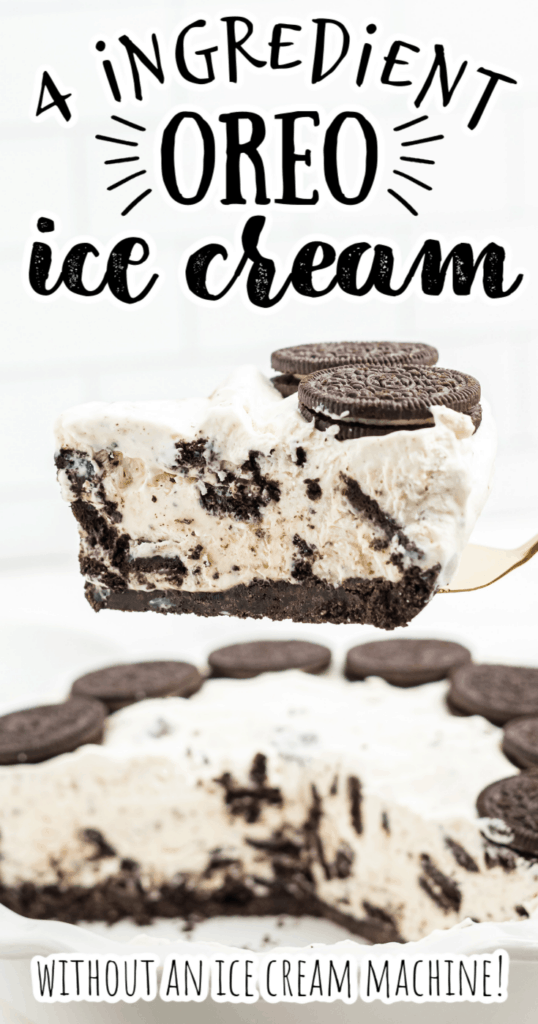 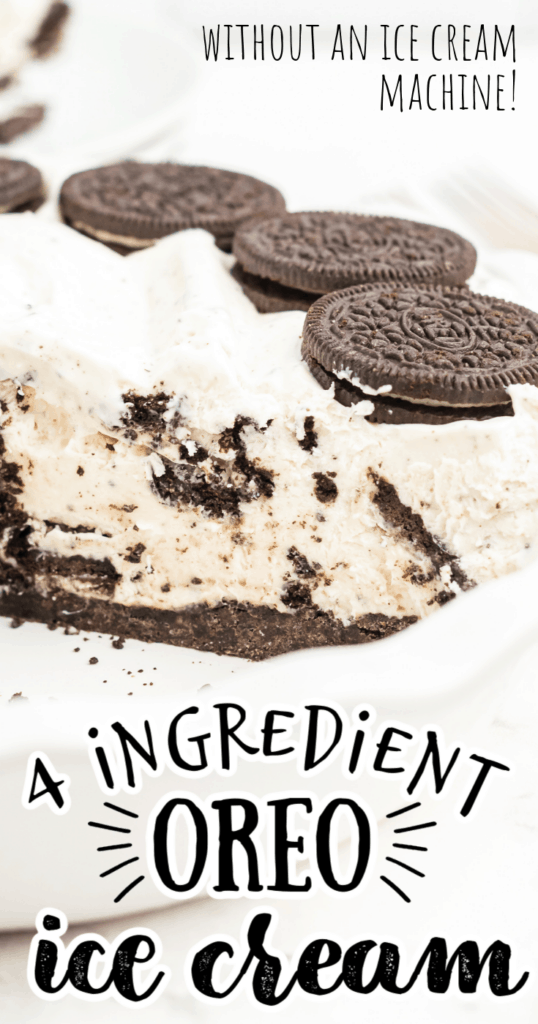 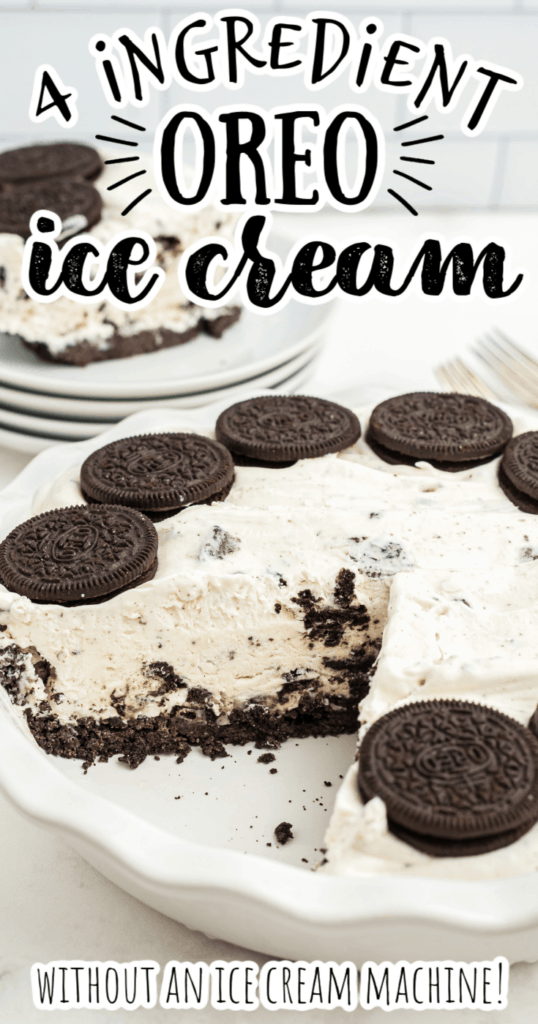 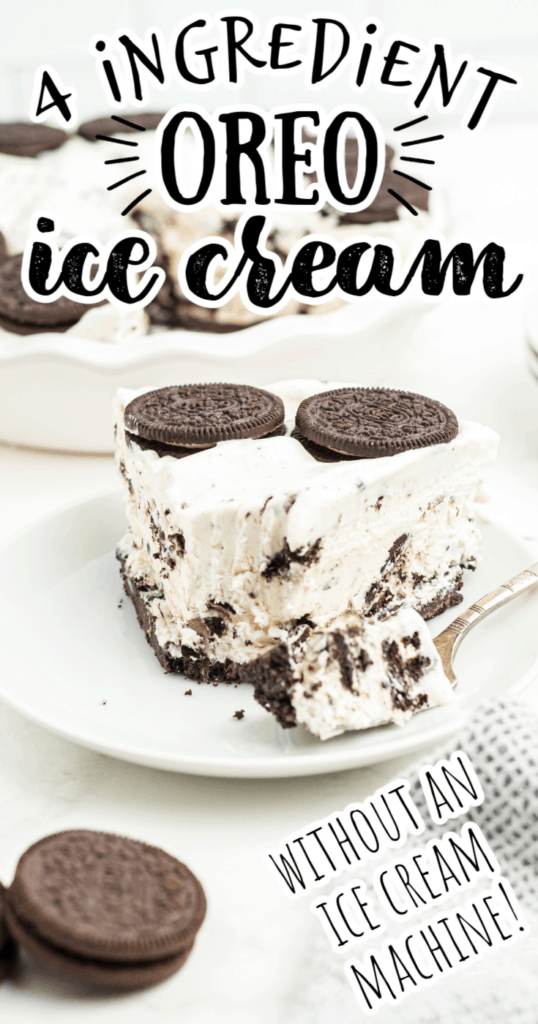 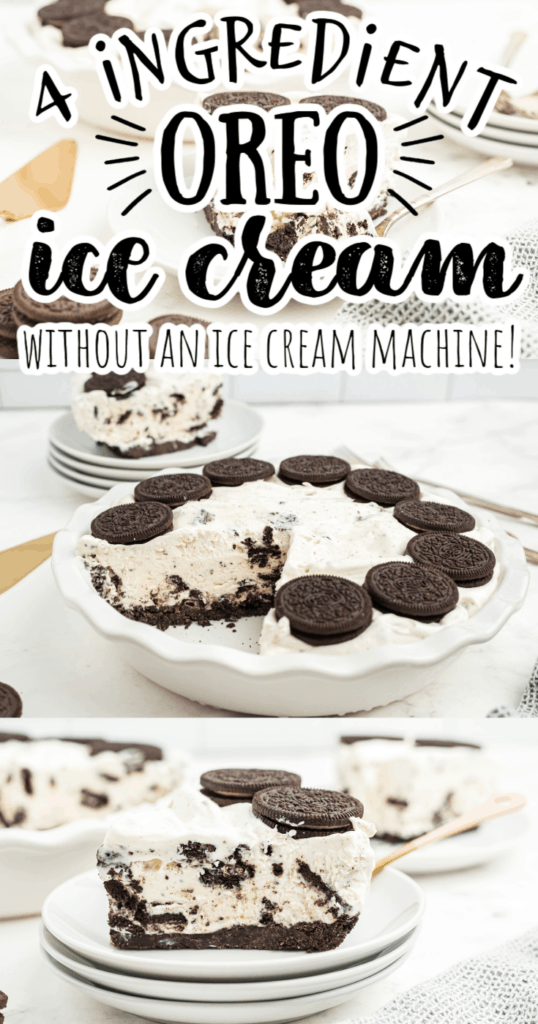 This 4 ingredient Oreo ice cream recipe is one of our favorite summer desserts because it is so easy to make from scratch without an ice cream machine. Add an Oreo crust, and it makes the perfect simple dessert recipe for parties, picnics, and barbecues, too.

My kids take cooking classes, several a week (sometimes several a day!) and have ever since quarantine started. My 10-year-old, Allie, has developed an insatiable curiosity for all things food, and she has decided that she wants to be a chef when she grows up. It's all very exciting to see as her mom. (My teen, Grace, has gotten into cooking too, although to a lesser extent, and she mostly does baking classes which produce amazing and all too frequent sweet treats.)

Anyway, one of my 10-year-old's earliest foods was this Oreo ice cream pie. She signed up for the class because Oreos! and ice cream! and what more do you need to know? The teacher was very sweet and nice, and the class was fun, and then we had to wait 4 whole hours to sample the goods.

Allie has since made this Oreo ice cream pie several times, and it's always gobbled up quickly. There's always a bit of ice cream leftover after filling the pie crust, and she freezes that in shallow ice cream containers and eats it later without sharing with anyone. It's that good.

To make the ice cream into a pie, you will need a 5th ingredient (butter) to make the Oreos in the crust hold together a bit better. If you use Double Stuf Oreos, that helps too, but you really can't get around the butter if you want a crust that holds its shape.

Does the Oreo pie crust need to be baked?

No! This is a 100% amazing no bake dessert. You put the whole thing in the freezer, and there is no baking at all.

This recipe uses sweetened condensed milk and heavy whipping cream to make a smooth and creamy base for the Oreo ice cream. Mix in the Oreos, freeze, and you're done. It really couldn't be easier and still be homemade.

For the Oreo pie crust:

For the Oreo ice cream:

This is a super simple recipe, but it helps if you have a few specialized tools:

How to put it all together

Try these other sweet treats while you're here:

This 4 ingredient Oreo ice cream recipe is one of our favorite summer desserts because it is so easy to make from scratch without an ice cream machine. Add a 2 ingredient Oreo crust, and it makes the perfect simple dessert recipe for parties, picnics, and barbecues, too.
5 from 3 votes
Print Recipe Pin Recipe
Prep Time 10 mins
Freeze time 4 hrs
Total Time 4 hrs 10 mins
Course Dessert
Servings 8 people
Calories 755 kcal

Leftover pie should be covered tightly with plastic wrap and stored it to the freezer.

This website uses cookies to improve your experience while you navigate through the website. Out of these, the cookies that are categorized as necessary are stored on your browser as they are essential for the working of basic functionalities of the website. We also use third-party cookies that help us analyze and understand how you use this website. These cookies will be stored in your browser only with your consent. You also have the option to opt-out of these cookies. But opting out of some of these cookies may affect your browsing experience.
Necessary Always Enabled
Necessary cookies are absolutely essential for the website to function properly. This category only includes cookies that ensures basic functionalities and security features of the website. These cookies do not store any personal information.
Non-necessary
Any cookies that may not be particularly necessary for the website to function and is used specifically to collect user personal data via analytics, ads, other embedded contents are termed as non-necessary cookies. It is mandatory to procure user consent prior to running these cookies on your website.
SAVE & ACCEPT
51 shares