A week or so before the accident, Joe and I decided to make a major change in our finances.

Our goals are to build up an emergency fund of at least three month's salary (how apropos given that we'd need such a fund just a week later!), start putting more money into retirement savings, and spend less each month.

Given these new financial priorities, we decided to cut out our restaurant habit. We have been known to go out or order in four times a week - or more - between lunches with friends, breakfasts with Grandma and Pappy, and assorted "hey! We've got nothing to eat!" outings.

We always stick to kid-friendly places, and we don't usually have an extravagant meal, but the bills were adding up to hundreds of dollars per month.

We thought that the transition would be easier if we integrated inexpensive, fun food traditions instead of just saying, "We're not going out to eat, period."

Thus, a new tradition was born - Friday night pizza. I had previously talked with Amy from Mom Advice about her family's Friday night pizza a few times. Friday night pizza works for Amy because her whole family knows what to expect, and they experiment with all different kinds of crusts and toppings. It's predictable, but with all the variety, it doesn't become boring.

Amy makes her pizza crust from scratch, mixes it in her bread machine, rolls it out, and bakes it. It's a very inexpensive meal (especially if the pizza is meatless), and it's a fun meal for the whole family.

If you're looking for more homemade pizza recipes, try this post with 24 of them!

How to Make the Best BBQ Pulled Pork Pizza 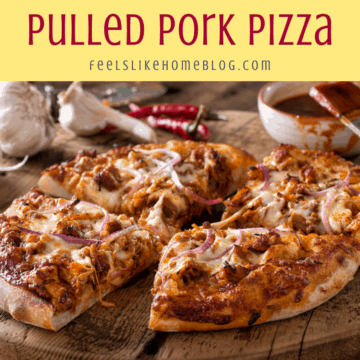 How to Make the Best BBQ Pulled Pork Pizza

Here is the link to our favorite homemade pizza dough. You could use a pre-made dough, and that would certainly save both time and effort, but the homemade dough is really delicious and I promise that you won't regret taking the extra time. Here is the link to our favorite slow cooker pulled pork. You could use pre-made pulled pork from the refrigerated section of the grocery store, but making it yourself is tastier and healthier. This pizza is a great way to use up leftover pulled pork, so I recommend making it a few days before you want to make the pizza.