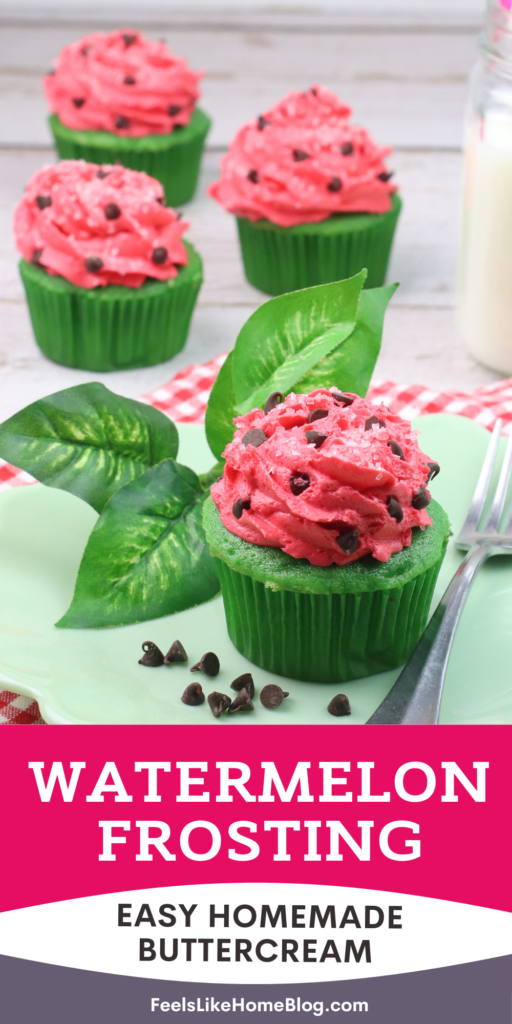 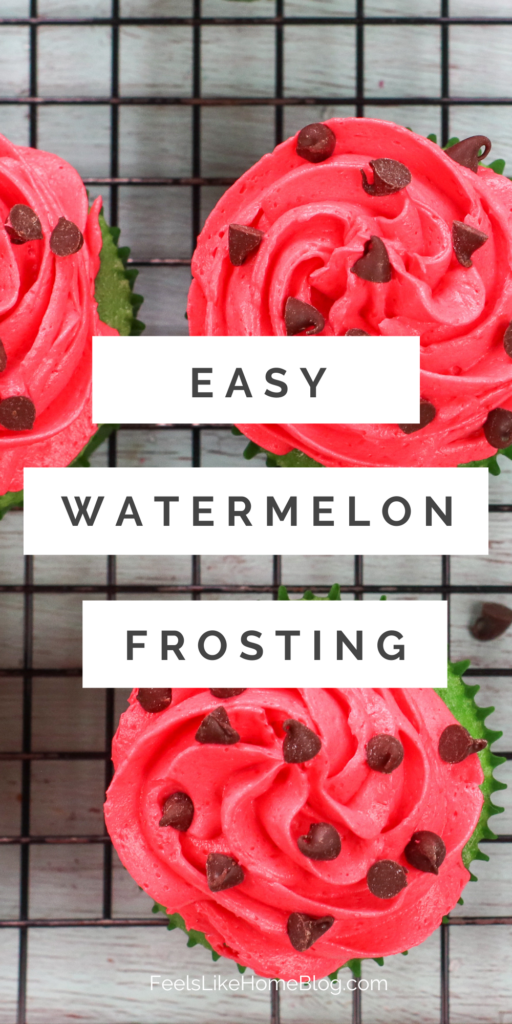 This homemade watermelon frosting is soft, sweet, tangy, and creamy! Fluffy yet dense, the light buttercream is perfect to pipe onto cupcakes or to decorate a cake.

When I was a little girl, my mom got me Hubba Bubba watermelon gum all the time. I remember that fake watermelon flavor with such fondness that I am a sucker for anything watermelon today.

Buttercream is my favorite type of frosting, so that was my logical choice for the watermelon version. To make buttercream, you simply cream together butter and powdered sugar (which is also known as icing sugar in most countries around the world), thinning with milk or cream as needed to get the right consistency. In my watermelon-flavored version, you're also going to add half of a packed of watermelon Jello for a subtle burst of fruity bliss. (Is subtle burst an oxymoron? It is a burst of flavor, but it's not overwhelming or in your face.)

If you want your watermelon cupcakes to look like mine in the photo, you'll need a white cake mix, some green food coloring and green cupcake liners, as well as dark pink and red gel food coloring.

You will need a mixer to make buttercream frosting. I prefer my electric hand mixer because it's easy to use and always out on my counter or table. A stand mixer is easier and more hands-off because you can just turn it on and let it run. The only reason I don't use my stand mixer is that it's sort of buried on the back of my counter, and it's a pain to dig it out. The hand mixer is just more convenient.

You'll also need some piping bags with fancy piping tips if you want your frosting to look like mine in the photos. If you don't need that fancy look, you could just spread it on the watermelon cupcakes with a knife.

See the printable recipe card at the bottom of the page for the ingredient measurements.

How to make watermelon frosting

I used this frosting to top watermelon cupcakes. (That's where I used the other half of the watermelon Jello, in the cupcake batter.) So step zero is to bake the cupcakes in the oven and cool them in the muffin pan. Then remove them from the pan to a wire rack and let them cool completely.

If you aren't a buttercream fan, you could add a half packet of watermelon Jello to the frosting of your choice. Add the food coloring and whip it to incorporate and distribute

How to use your watermelon frosting

You can use this watermelon flavored buttercream on any basic cake such as a white cake or a yellow cake, but my favorite way to use it is on these easy watermelon cupcakes. You can make them standard cupcake pans, but they're just as good as mini cupcakes or jumbo cupcakes (just use different sized pans). 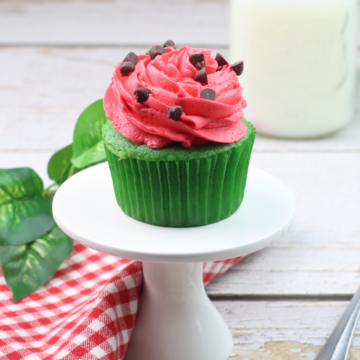 This website uses cookies to improve your experience while you navigate through the website. Out of these, the cookies that are categorized as necessary are stored on your browser as they are essential for the working of basic functionalities of the website. We also use third-party cookies that help us analyze and understand how you use this website. These cookies will be stored in your browser only with your consent. You also have the option to opt-out of these cookies. But opting out of some of these cookies may affect your browsing experience.
Necessary Always Enabled
Necessary cookies are absolutely essential for the website to function properly. This category only includes cookies that ensures basic functionalities and security features of the website. These cookies do not store any personal information.
Non-necessary
Any cookies that may not be particularly necessary for the website to function and is used specifically to collect user personal data via analytics, ads, other embedded contents are termed as non-necessary cookies. It is mandatory to procure user consent prior to running these cookies on your website.
SAVE & ACCEPT
28 shares