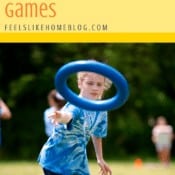 17 awesome St. Patrick's Day minute to win it games for kids and families! These simple, fun, and easy games can be used at home or in a classroom party and will inspire lots of laughs! The challenges use food, candy, and Dollar Store materials. Great family activities. 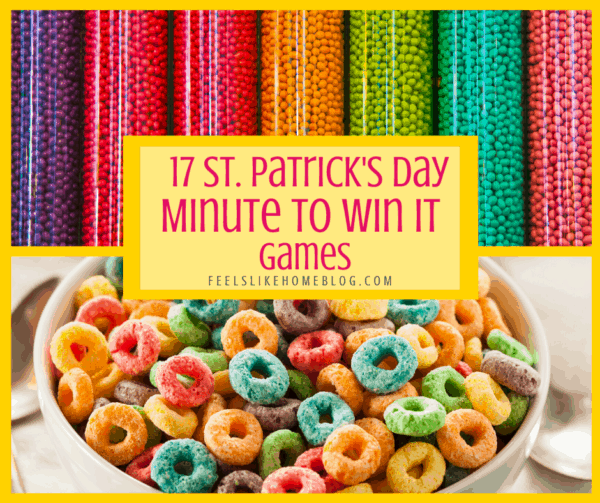 These fun St. Patrick's Day Minute to Win It games can be played at home with your kids or in the classroom with a group. They are fun, simple, and easy to prepare and will leave you laughing.

As a family, we played Minute to Win It for Valentine's Day, and it was the best fun we've had in a long, long time. I wanted to capture that sense of fun and laughter for the next minor holiday - St. Patrick's Day.

17 St. Patrick's Day Minute to Win It Games for Kids and Families

Lucky Charms stack - Use chopsticks to stack marshmallows from a box of Lucky Charms. Whoever has the highest stack after one minute is the winner.

Fruit Loops sort - Each person gets 2 cups (measured) of Fruit Loops cereal to sort by color. Whoever sorts hers first is the winner.

Threading Fruit Loops - Each person gets some Fruit Loops and a pipe cleaner. After one minute, the person with the most loops on the pipe cleaner is the winner BUT you can only use one hand to do it.

Sucking Skittles - Each person gets a straw, a plastic cup, and a pile of Skittles. After one minute, whoever has the most Skittles in her cup is the winner BUT the only thing she can touch is her straw - not the cup or the candies.

Scooping Skittles - Dump a couple of handfuls of Skittles out on the table for each player, who has a spoon and an empty cup. Players may only touch the spoon, no hands on the candies during play. The player with the most Skittles in her cup after one minute is the winner.

Catching Skittles - You play in teams with partners about 3 feet apart. One partner throws Skittles into the paper cup of the other partner. After one minute, the catcher throws and the thrower catches. The team with the most Skittles in the cup after two minutes is the winner. If you're feeling daring (and not worried about the choking hazard), you could throw directly into the mouth.

Dropping Skittles - This game is surprisingly difficult. You start with a vase with a small (about 1") opening between your feet, then you drop Skittles from waist-high into the vase. The person who gets the most Skittles into the vase in one minutes is the winner. Joe and I thought this was fun, but this was the game that made both of our kids devolve into frustrated tears when we played the first time. Also, I am really good at this and won.

Get off my lawn - Play in two teams with a line drawn down the middle of the table. Start with equal amounts of Fruit Loops on each side of the line (say, 1 measured cup on each side) and each player should have a straw. Players attempt to blow the Fruit Loops across the line into their opponents' turf. The team with the LEAST Fruit Loops on their side after one minute is the winner.

Fruit Loops in my toes - Put some Fruit Loops on the floor. (This is painful as I hate to waste food.) The player has one minute to pick up as many loops as possible with only her toes and put them into an empty cup or bowl on the floor. The winner is the person who collects the most loops.

Cup of green - Each pair gets a bowl of Skittles. Each person has a pair of chopsticks and has to get only the GREEN Skittles into their own cup. The person with the most green Skittles after one minute is the winner. You could also play this with Trix cereal. That would be a little easier since Skittles are slippery.

Ring toss - This isn't your normal ring toss! Each player gets an empty cup and a pile of Fruit Loops (these are the rings!). She should place her elbow on the corner of the table and the cup in her hand. Extend the arm onto the table and place the empty cup where her hand rests. (This makes it more fair, so bigger people have to throw their Fruit Loops further and smaller people have to throw theirs less far.) Then the object is to throw rings into the cup. Whoever has the most rings in the cup after one minute is the winner. Use smaller cups to make it more challenging.

Peeling leaves - Each player gets a head of cabbage and must carefully remove the leaves - whole - one at a time. Whoever has the most complete (or mostly complete, use your judgement) leaves after one minute is the winner.

Rhyming game - Traditional Irish games often include rhyming or chanting, so this is perfect for St. Patrick's Day. Each player (or pair if you have emerging readers/spellers) gets a piece of paper and a pencil, and the person or team with the most rhyming words at the end of one minute gets a point. We played four times, one minute for each word: GREEN, GOLD, SAINT, and LEAF.

Stacks of gold - Each person gets a stack of pennies and the person with the tallest stack after one minute is the winner.

Breakfast scramble - Cut the fronts of the Lucky Charms boxes into rectangles, 20 rectangles per box. Each person or pair has to reassemble their box front into the correct picture. The real game has a time limit, but we played this as whoever did it first was the winner.

Stack attack - For this one, you will need 21 green plastic cups. The object is to stack the cups (all of them) into a pyramid and then slide the pyramid down into a single stack, all in under one minute.  Like Breakfast Scramble above, we didn't constrain it to a minute and the winner was the person who did it the fastest. Watch this video for a demonstration:

If you're looking for fun St. Patty's Day ideas, check out these new St. Patrick's Day traditions you could start this year!

As I said above, Minute to Win It is our family's new favorite family fun activity. We really enjoyed each other and our time together as we competed to win the games. We did have a little pouting, and both of our kids got frustrated and quit at some point, but they both came back, tried again, and kept going as we played through the evening. I am eagerly looking forward to our next Minute to Win It competition, maybe for Easter this time!

There are lots more fun family bonding games in these lists, too: 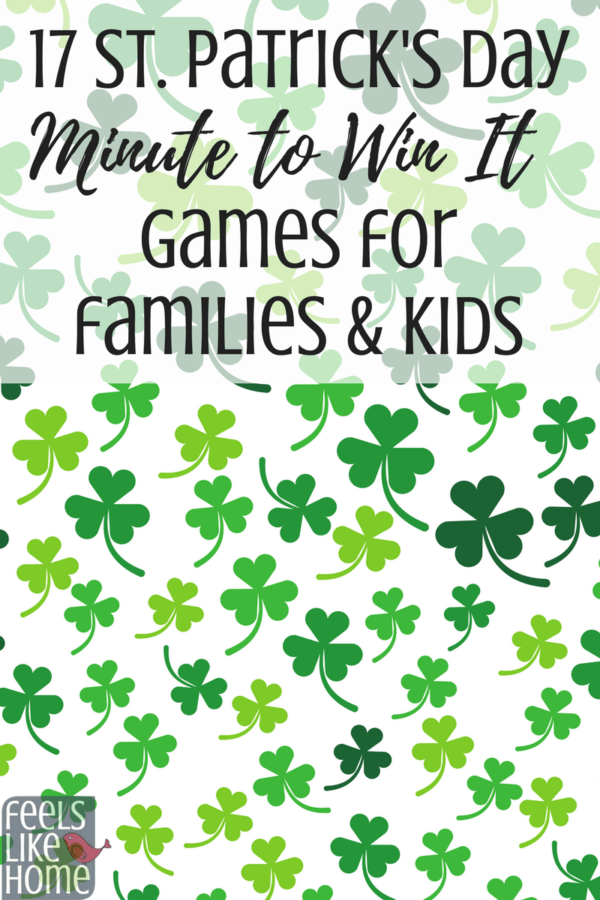 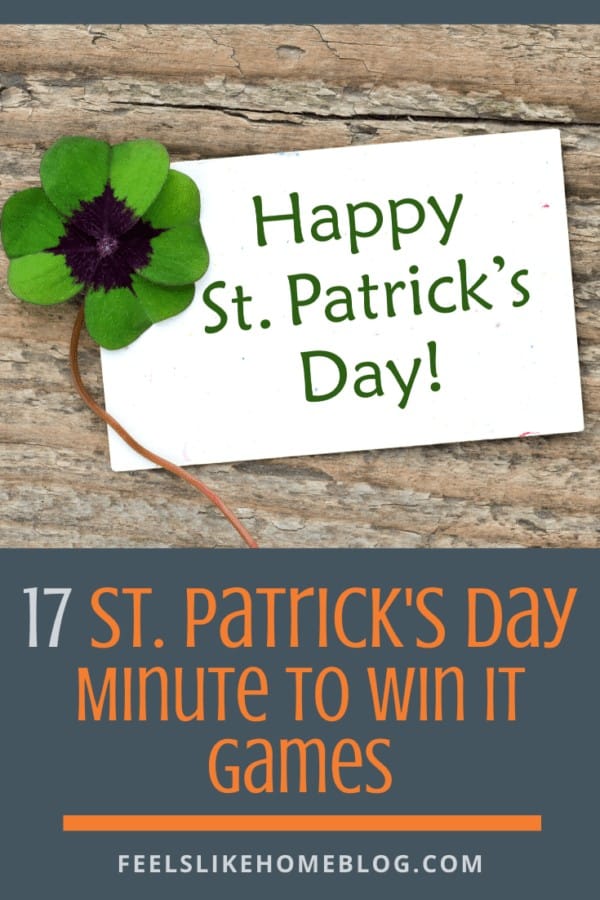 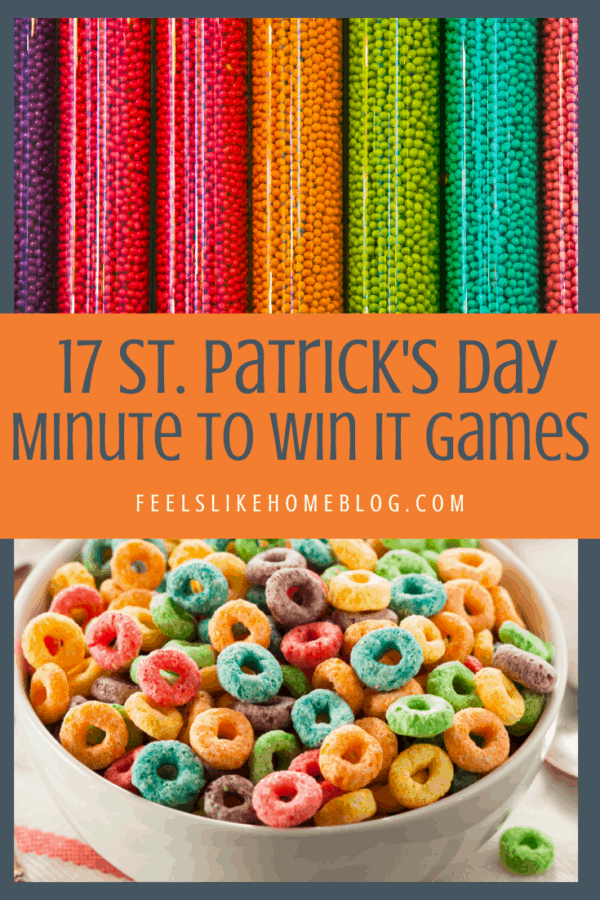 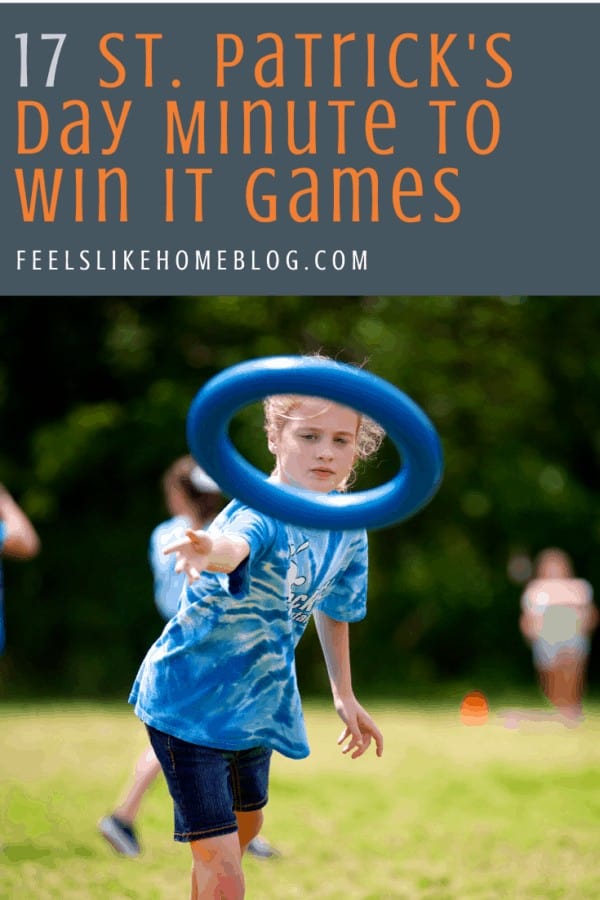 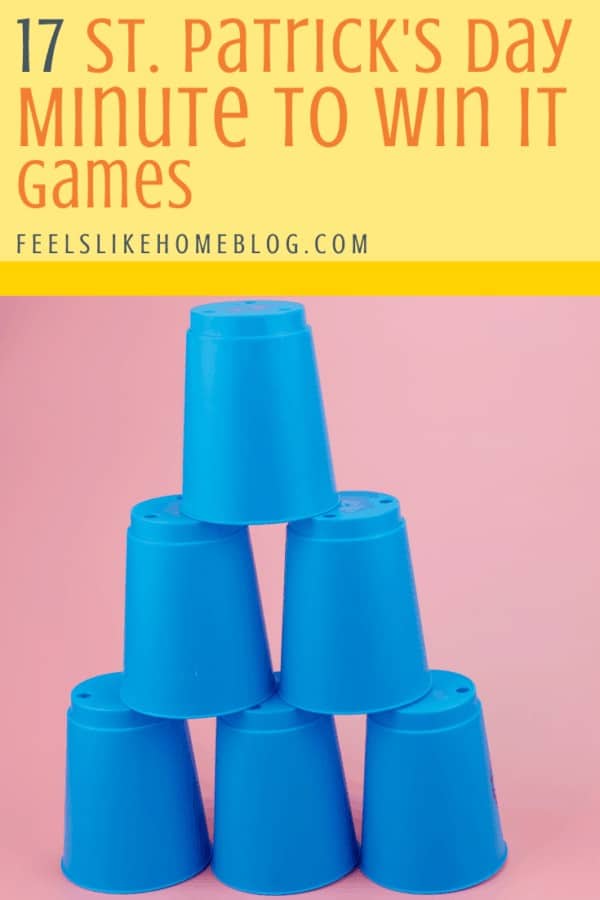 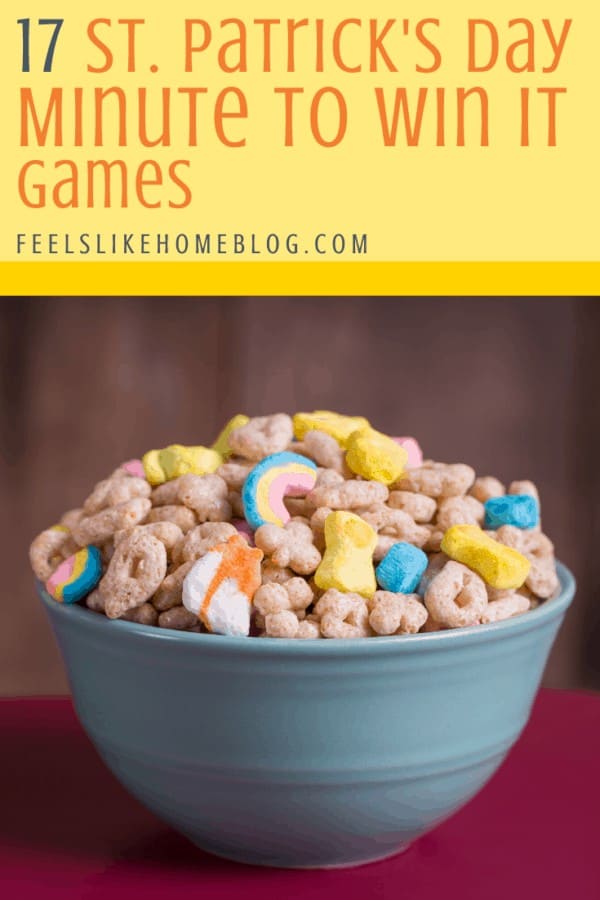 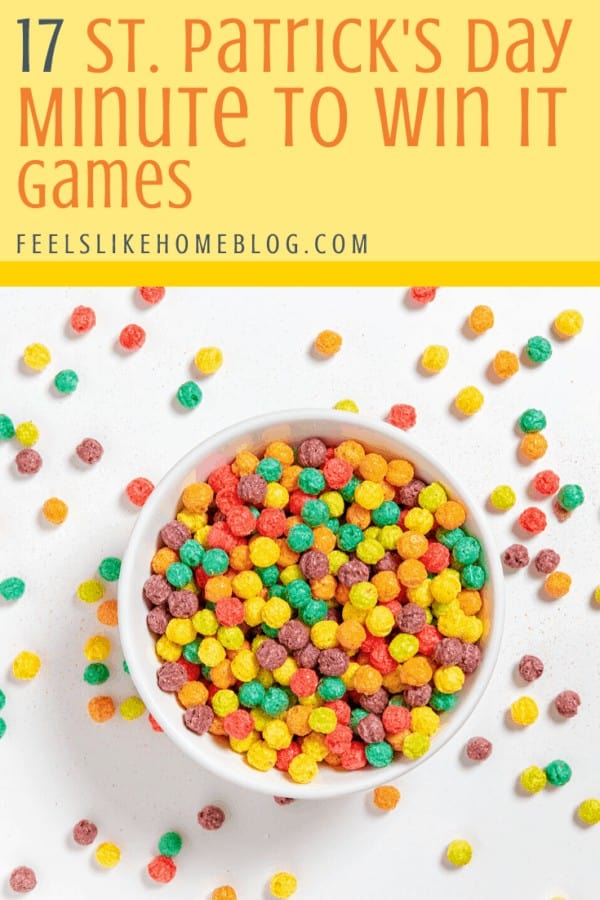 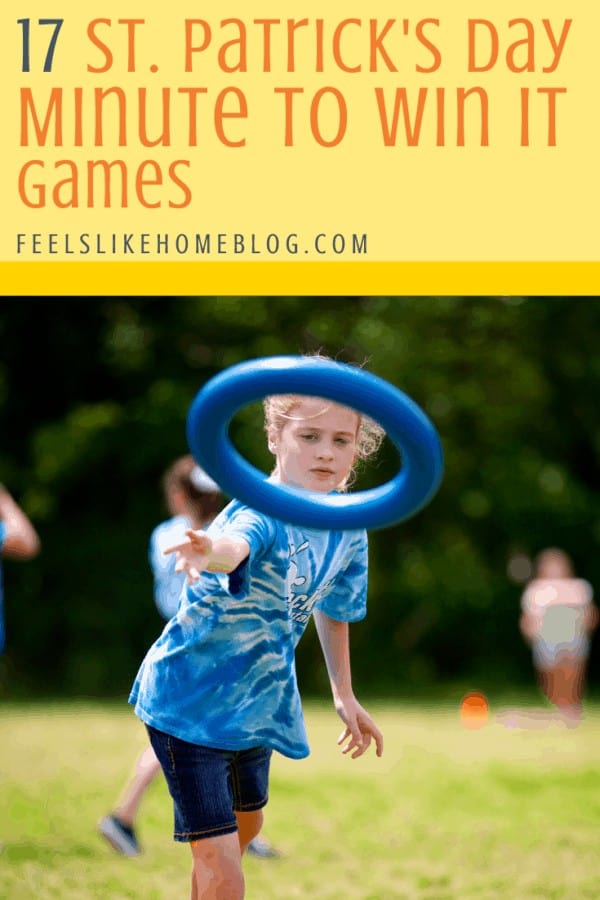 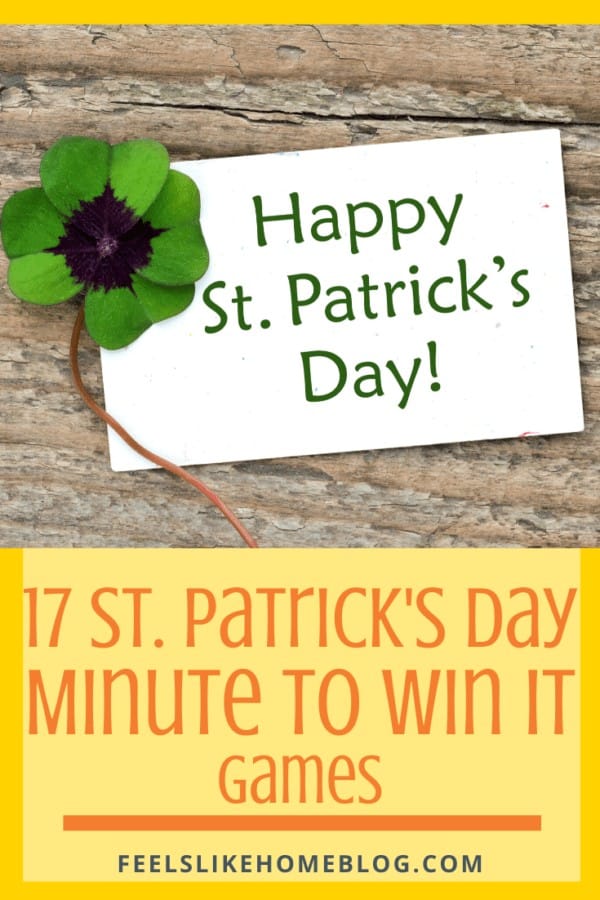 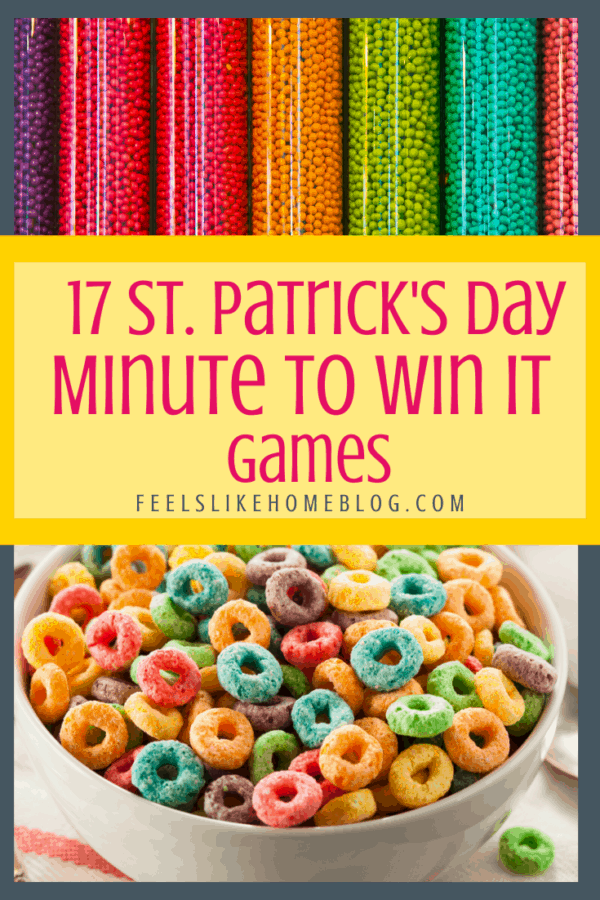 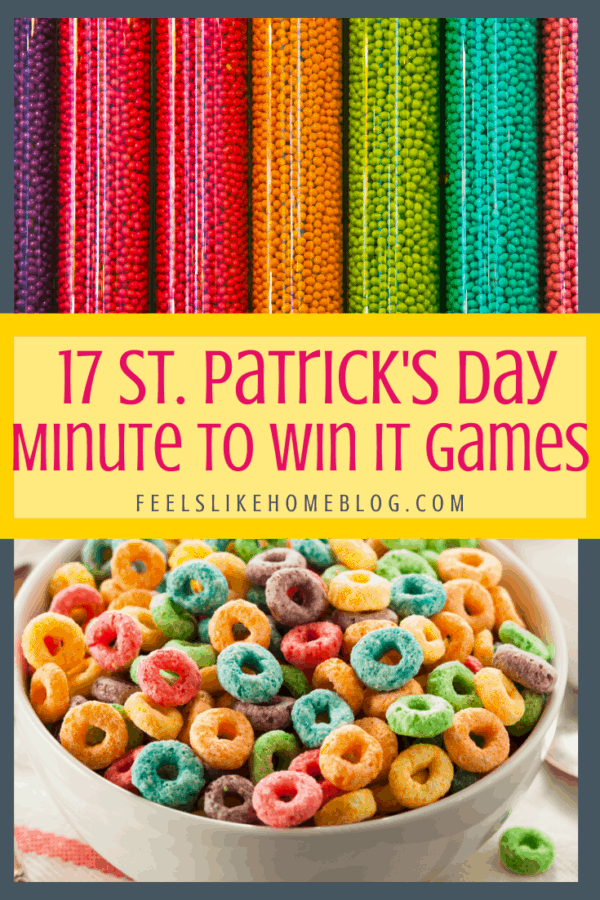 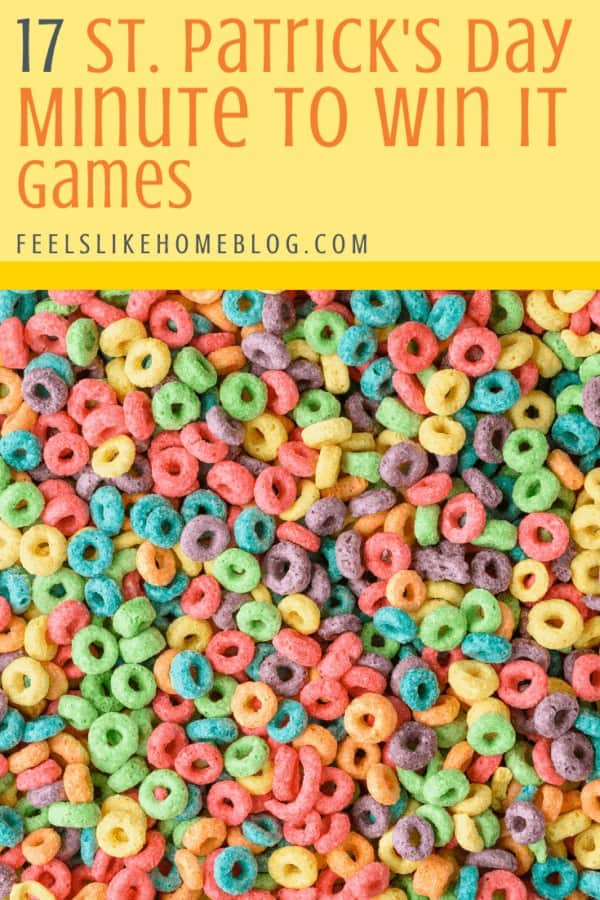