You are here: Home / Learning / Teaching the Scientific Method & a Free Printable

Earlier in July, I posted a terrific article (if I do say so myself) on the science behind slime and all the cool lessons and activities you could do to teach real science concepts like viscosity and non-Newtonian fluids. Buried in that post was this printable, and I was afraid it might get lost in the sliminess.

So, below is the section from that post explaining what the scientific method is and how it can guide any experiment you do or answer (almost) any question you and your kids have about a sciencey subject.

I love the scientific method, and when I was a high school science teacher, I used a paper airplane lab to teach the steps. That will post next week so be on the lookout!

The scientific method is the backbone of all science. It’s the general set of steps that all scientists and researchers follow in order to learn new stuff about the world, although it is fluid and flexible and sometimes done in a different order. But essentially, here’s what happens:

Then you start over, tweaking your hypothesis given the new information that you have. You might repeat this process four or five times or even more depending on your experiment and variables. 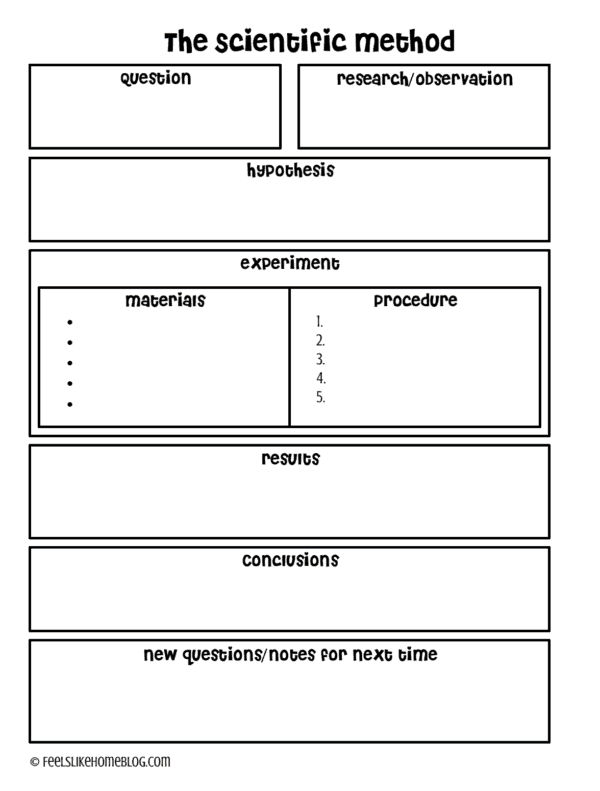 Hint: a great way to write the question in the beginning is to follow this format:

A trial is one run of an experiment. In some experiments, only one trial can be performed, but to get the best results, you often will do at least three trials with identical situations. For example, in the paper airplane lab below, you would get results if you flew each airplane one time. However, if you threw each airplane three times and took the average of the three results, you would have a much more reliable picture of the airplane’s true behavior.

In the slime example, it doesn’t make much sense to make each recipe three times. That would be a waste of your materials as, presumably, if you use the same recipe each time, the results will be the same.

Do you teach the scientific method in your homeschool?