How kids can make homemade ice cream in a bag - This simple recipe makes it easy to to make vanilla ice cream with milk and heavy cream. It's an easy experiment that you can do and there's a great science explanation behind it. Also good for homeschool, preschool, or classroom use.

Last week, I mentioned how Grace and Joe made homemade ice cream together.

I had no idea what a fervor homemade ice cream would cause among you all. I received several emails asking for the recipe for the homemade ice cream, so I thought I'd share it here rather than write it out a bunch of times.

Look how happy she is! All because she made some ice cream herself.

I have written out the full instructions for making homemade ice cream in a bag below. It is really very easy, and the science behind it, while over the head of the little pumpkin in my photo, is also very easy to understand. I've included some additional experiments below the recipe to extend the learning for your kiddos. 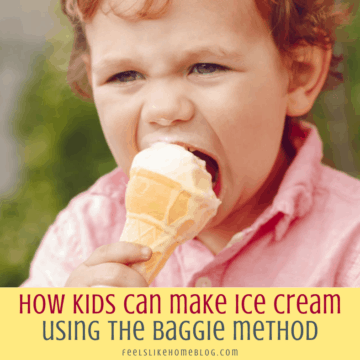 Homemade Ice Cream in a Bag

How kids can make homemade ice cream in a bag - This simple recipe makes it easy to to make vanilla ice cream with milk or heavy cream. It's an easy experiment that you can do and there's a great science explanation behind it. Also good for homeschool, preschool, or classroom use.
5 from 2 votes
Print Recipe Pin Recipe
Cook Time 10 mins
Total Time 10 mins
Course Dessert
Cuisine American
Servings 1 person
Calories 127 kcal

There is so much you can do with ice cream science. To start with, you can talk about solids, liquids, and gases. These are the 3 phases of matter or states of matter. Matter is everything that takes up space and is made of atoms and molecules. There are a few things that take up space and are not matter (like fire), but for the most part, everything we see and touch is matter.

So matter exists in 3 states: solid, liquid, and gas. Solids are rigid and always have the same shape. In a solid, the atoms or molecules are all lined up in a pattern, and they cannot move much. (They do vibrate, but they don't zip around within the material.) Liquids are fluid and take the shape of their container although they don't expand to fill the container. In a liquid, the atoms or molecules are free to move around and have no set shape. In a gas, the atoms or molecules are highly energized, and they zip all around and spread out to completely fill up their container. That's why balloons blow up: the gas inside them is pushing out in all directions, trying to escape. If you've ever filled up a water balloon, it is likely to have had an air bubble inside. This is because the water doesn't expand to fill the whole balloon.

Okay, so now that you know about solids, liquids, and gases, we can talk about how adding salt to ice makes it colder. We put salt down on roads and sidewalks in the wintertime to melt the ice, and there's a good reason for that. Salt water freezes at a lower temperature than water without salt.

The experiment: A simple salt water experiment will show how the salt impacts the freezing point of water. Take 2 plastic cups half full of water, and add a couple of heaping tablespoons of salt to one of them. Stir well (all of the salt won't dissolve, and that's okay). Put both cups into the freezer and check every 15 minutes for at least 90 minutes. Your freezer is probably between 10ºF and 20ºF, and you will see that the fresh water freezes while the salt water barely gets slushy. This is because the dissolved salt (a solid) lowers the freezing point of the water (a liquid that is trying to line up its atoms to make a solid), making it take significantly more energy to get the molecules to line up. Think of it this way: the salt is made up of tiny solid pieces, and it's like getting sand in your teeth. Try as you might, it is hard to grit your teeth when there's sand in there. It takes a lot of effort to do it because the sand gets in the way. It's similar with salt water. It takes a lot of extra energy for the molecules to line up properly because the salt is in the way.

Milk expands as it turns to ice cream

There are actually two things going on here. First of all, water expands as it freezes because the molecules are triangular in shape and take up more space when they're all lined up than they do when they're all flowing around in the liquid form. But more importantly than that, making ice cream requires adding air to the milk. You can see this through some fun with bubbles.

The experiment: Fill a plastic cup half full of water and add a squirt of dish soap. Use a straw the blow bubbles in the cup and watch them grow. When the cup is nearly overflowing (or go crazy and make it overflow all over the table), you can talk about what is happening. All you are adding to the liquid is air (from your breath), and it grows and grows. In much the same way, you are adding air to your ice cream as you squeeze and squish it in the bag. Even though you remove a lot of the air from the bag, there's still plenty in there to mix up with the milk and make it expand.

These optional experiments will help your kids to understand why you use salt in the ice and why you have to squish the ice cream around in the bag. They make the whole activity come together to maximize learning and make it a whole lot of fun too!