Along with the rest of the technophilic world, I am saddened by the death of Steve Jobs.

He was an innovator, a modern day Leonardo da Vinci, a creative revolutionary whose goal was to change the whole world for the better. There's no doubt that he was a spectacular genius who accomplished exactly that.

Steve Jobs was known for his meticulous attention to detail, his extraordinary passion, and his obsession with breaking the rules, pushing society forward, changing the world forever. 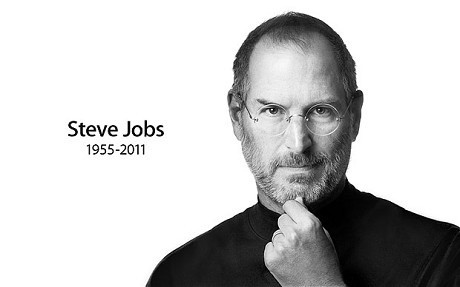 His legacy goes far beyond a product line. Everything Steve Jobs did, everything he accomplished encouraged others to make their own way, to stop conforming to what is and start creating what could be. That is his legacy.

In the months before his passing, Steve Jobs had been working with an author to compose an official biography. Several news outlets reported that his motivation for the biography was to leave his story for his children. It is being reported that he said,

I want my kids to know me. I wasn't there for them, and I want them to understand why.

I don't know Steve Jobs. I don't know his four children. I don't know what any of them thought about his devotion to his company, his vision for America and the world, or his unavailability in their lives.

It sounds like, in his last days, he wished he'd been around more for his kids.

My own confidence has been weak lately. I've questioned myself, whether my continuing to be at home with my kids is the right choice, whether I should be accepting offers to travel the country and speak to groups or consult with large corporations, whether I should be offering more workshops.

Steve Job's words pierced my heart like an arrow.

He made a difference to the world. He revolutionized entire industries as a matter of daily practice. He was great. He created. He designed. He inspired legions of devoted followers, myself included.

Steve Jobs chose the world, sacrificing his family's share of his time, and the world will be forever grateful.

I make a different choice. I choose my kids, possibly sacrificing my contribution to the world. I choose to raise people. I know my children completely, and they know me as well. I choose to wipes bottoms and pick up toys and play and teach. I create and inspire, but on a minute scale.

There is no judgement here. Every person makes decisions based on his or her own priorities, and the world needs great leaders to sacrifice their personal time for the good of the group.

There aren't enough hours in the day, enough days in the week, to be a creative or business genius and an immersed and involvedÃ‚ Ã‚  parent.

What do you choose?