I made this. It was a pain in the neck, but I made it, and it is beautiful. 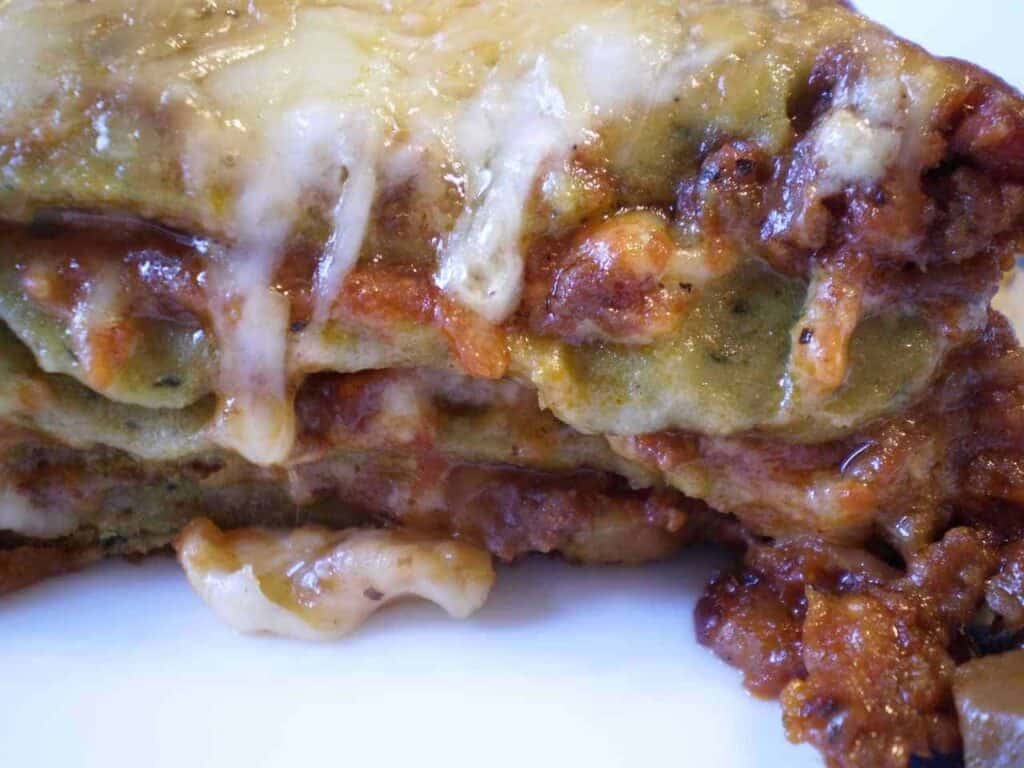 I love lasagna, Dear Reader. I love to eat it, but I had never successfully assembled or cooked it until today.

Note that I did not say that I've never tried, but that I said I have never been successful.

The March challenge of the Daring Bakers is hosted by Mary of Beans and Caviar, Melinda of Melbourne Larder and Enza of Io Da Grande. They chose the recipe Lasagne of Emilia-Romagna (Lasagne Verdi al Forno) from The Splendid Table by Lynne Rossetto Kasper for our challenge. They required us to use a bechemel sauce and the handmade spinach pasta, but gave us latitude to chose any red sauce of our liking.

When I saw this challenge, my heart dropped. Not only did I have to make hand rolled spinach pasta, but once I finished the pasta, I had to make it into a fancy green lasagna? This was not going to go well.

I thought about dropping out of the Daring Bakers. I was afraid. Joe talked me out of quitting before my second challenge. We'd tackle this challenge together! So the whole month went by, and we both successfully avoided any mention of the challenge.

And then it was too late to avoid it any more (meaning that this post had to be done by today) and we set to work. Joe purchased the necessary ingredients on his way home from work on Thursday, thinking that we'd make the pasta on Thursday night, after putting Grace to bed.

Joe was wrong. There is nothing quick about this pasta. If you want to see the actual recipe, you can check out one of the hosts' blogs that I linked above.

I think it took us seven hours just to make the pasta. No, I'm not kidding, and yes, we have a KitchenAid mixer with a pasta extruder attachment. The recipe claims to take 45 minutes, but I'm not sure in whose world. 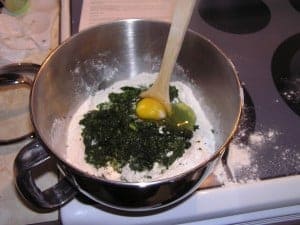 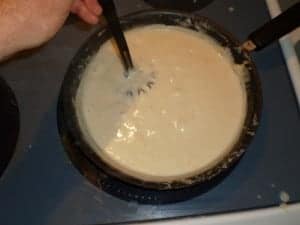 This part we did exactly as the original recipe dictated.The next time we attempt this recipe, I will double the bechamel.

Using a medium-sized saucepan, melt the butter over low to medium heat. Sift over the flour, whisk until smooth, and then stir (without stopping) for about 3 minutes. Whisk in the milk a little at a time and keep the mixture smooth. Bring to a slow simmer, and stir 3 to 4 minutes, or until the sauce thickens. Cook, stirring, for about 5 minutes, until the sauce thickens. Season with salt, pepper, and a hint of nutmeg. 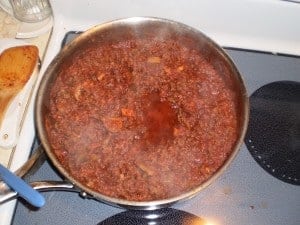 The Daring Bakers suggested a certain ragu, but Joe suggested we use our own. After all, we (quite successfully) made our own spaghetti sauce in the summer last year, and ragu is, more or less, a thickened meat and tomato sauce with vegetables added in.

Joe browned one pound of ground beef and 3 ounces of diced ham that was leftover from dinner a few nights ago. When the meat was cooked, he poured in one quart jar of our homemade spaghetti sauce. You can find the recipe for our homemade spaghetti sauce here. He continued to simmer the sauce and the meat until we were ready to prepare the lasagna, and the meat soaked up most of the liquid from the sauce. Next time, I think a second quart jar of sauce would be good.

This is the recipe that never ends. By this point, we had been working on this meal for almost nine hours.

The lasagna tasted fine. It would have tasted better if I hadn't convinced Joe to not cook the noodles. They tasted like raw noodles and were a little dry and crunchy. We're going to invest in a different kind of pasta machine - a pasta roller - and use what we learned this time to make this lasagna again. It will go much more smoothly next time.

I ate my lasagna with extra sauce on top. The original recipe says to use very thin layers of bechamel and ragu, but I prefer more substance in my lasagna. I like things gooey.

This website uses cookies to improve your experience while you navigate through the website. Out of these, the cookies that are categorized as necessary are stored on your browser as they are essential for the working of basic functionalities of the website. We also use third-party cookies that help us analyze and understand how you use this website. These cookies will be stored in your browser only with your consent. You also have the option to opt-out of these cookies. But opting out of some of these cookies may affect your browsing experience.
Necessary Always Enabled
Necessary cookies are absolutely essential for the website to function properly. This category only includes cookies that ensures basic functionalities and security features of the website. These cookies do not store any personal information.
Non-necessary
Any cookies that may not be particularly necessary for the website to function and is used specifically to collect user personal data via analytics, ads, other embedded contents are termed as non-necessary cookies. It is mandatory to procure user consent prior to running these cookies on your website.
SAVE & ACCEPT
3 shares