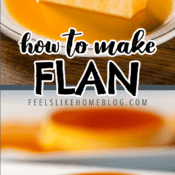 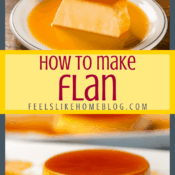 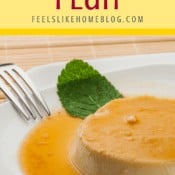 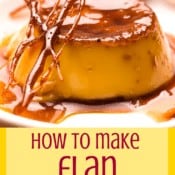 This is the best simple and easy flan (or crème caramel) you'll ever taste! Recipe is easy to follow. Traditional, classic flan is incredibly smooth and creamy with a thin caramel sauce.

There is one dessert that I can almost never pass by. Actually, now that I write that out, there are a few I can't pass by.

Peanut butter pie. Flan or crème caramel. Cheesecake. If all three on on a dessert menu, I am really stuck.

I joined a group called The Secret Recipe Club after my friend Mary Tweeted something about it. The idea is that you are assigned a food blog every month and you make a recipe from it.

We really like to try new recipes and new foods, so I signed up.

This month, I was assigned Eliot's Eats (link no longer available), a site that focuses on eating whole foods that were grown or raised locally. After looking through a few pages of recipes, the one that spoke to me most was for custard.

The author explains that her grandmother used to give everyone custard when they were sick. I don't totally understand that tradition, as my mother always withheld milk and eggs when we were sick, but that's irrelevant. I love custard, so I knew this is the recipe we'd try.

I'd never attempted to make custard before, and I was excited.

I followed a link in the post and learned how to turn plain old custard into flan by boiling a cup of sugar and putting it into the dishes before the custard. Perfect!

Also, Eliot's recipe calls for scalded milk. I had absolutely no idea what scalded milk was or how to prepare it. I searched for it on Swagbucks, and I learned that you heat the milk up to 180°F, just until it begins to get a frothy layer of bubbles around the edge. The more I read about scalding milk, however, the more sources said that you only need to do it if you're using unpasteurized milk. I don't use unpasteurized milk, so I skipped the scalding step.

My flan came out very nicely.

How to make classic flan

If you liked this flan recipe, you should check out my pumpkin flan recipe. It is very different but just as tasty! 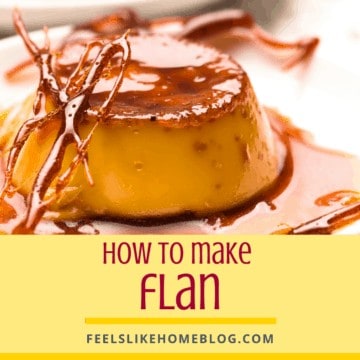 You will need 4 ramekins for this recipe. Ramekins are individual-sized baking dishes that can be put in the oven. That link goes to the ones that I personally have. I like them because they are good to go from the oven to the fridge to the dishwasher, no problem.