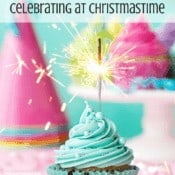 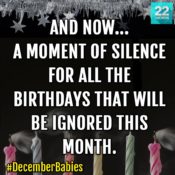 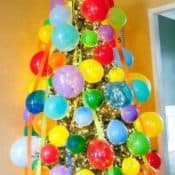 Allie's birthday is December 28, three days after Christmas. The poor girl has a birthday between Christmas and New Year's. Talk about rotten luck.

I remember that December 24 and 25 and 26 and 27 and 28 in 2010, and I remember how long the days were and how much I hated being on bedrest and how uncomfortable I was. I was so ready to have the baby out and be done with pregnancy bedrest.

Even though she was a couple of weeks early (like four), she was born because my blood pressure was so high. And she lost the birthday lottery.

Although in truth, I'm not sure that a late January birthday is all that much better than a late December one, but at least there's no Christmas in January.

So the real reason for my post today is not to discuss my pregnancy but rather to share what you should and shouldn't do for December birthdays.

Not that I am an expert being that my birthday is in July (summer = best time for birthdays), but my daughter and my husband both have birthdays the week of Christmas (Joe is December 23), so I know what I'm talking about here.

Do's and Don't's of December Birthdays

But here's the thing.

She doesn't know any different, and she's perfectly okay with her December birthday.

I am going to push this year for a half birthday party, just to spread out Allie's gift receiving, but I tried it when she was a toddler and it didn't work out too well.

The bottom line is that what makes a birthday special isn't really the shape of the cake or the wrapping on the gift. It's a loving family who makes the birthday kid feel valued and important - and you can easily do that using this list even if you skip the party all together.

I asked Joe once whether he felt cheated by having a birthday two days before Christmas. "No," he said. "My mom always made a big deal out of my birthday, and I knew it was special. It didn't matter when it happened."