You are here: Home / Learning / What Do Sugary Drinks Do to Your Teeth? – Kids Science Experiment My kids are pop fiends. (I know some of you are confused right now because you call pop soda.)

Probably because I am a pop fiend. They learn what they see, right?

It’s not one of our finer points.

Anyway, I wanted to show the girls what pop does to their teeth because they are both kind of in a funk where they don’t want to brush without a lot of prompting.

So we talked about how your teeth are made of the same basic stuff (calcium) as eggshells, and so we could soak some eggs in drinks that we like to see what would happen to them over time.

The results, as you can see above, were striking. The kids, Allie especially, really got the idea that these drinks are harmful to her teeth, and she has since been brushing every day without any fuss. The hard shell of an egg protects the soft parts inside, just like the hard enamel on your teeth protect the soft and tender pulp on the inside. Both eggshells and teeth are made of calcium, a hard white substance that also makes up our bones.

Sugar and acids are very harmful to teeth. Acids actually dissolve the enamel, giving bacteria an inroad to begin decaying it, and sugar promotes decay (cavities).

Of course, the water egg was the best after 24 hours. But take a look at the Gatorade egg: 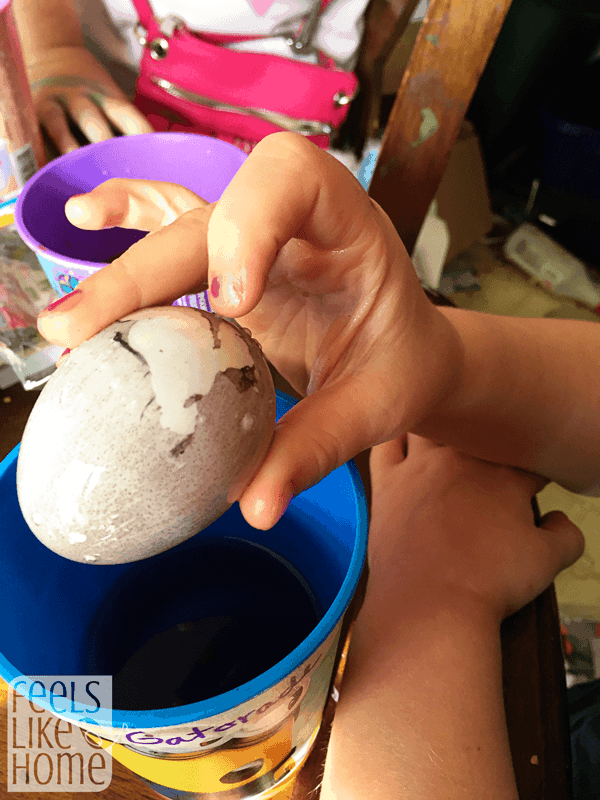 There was definitely a yucky-looking purplish coating on the egg, but it was fairly easy to wipe off with just our fingers. Unfortunately, the slime made the egg slippery and it fell on the floor before I was able to photograph it with the other eggs (in case you were wondering why there were only 3 eggs in the photos, now you know).

This was the black cherry pop egg: 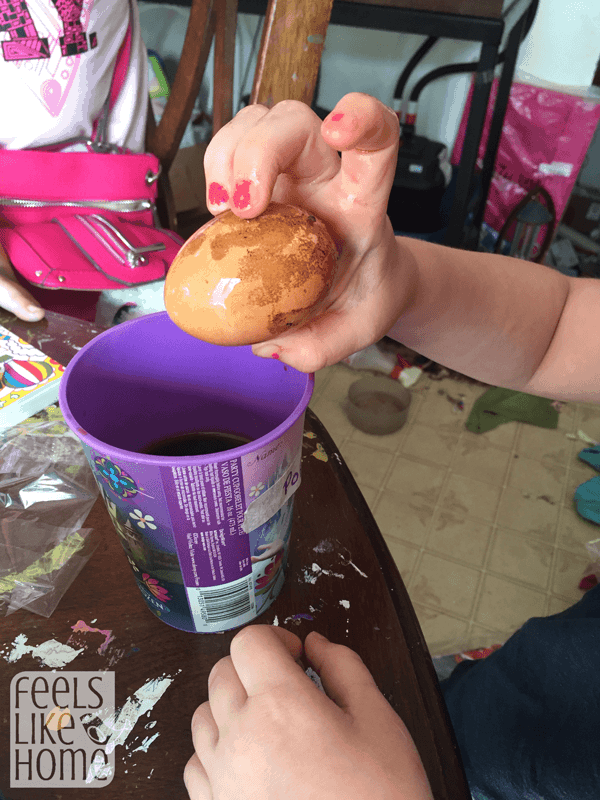 And this was the grape juice egg: (I love the shock on Allie’s face here.) A study published in the journal General Dentistry found that pop is actually ten times more harmful in the minutes after drinking than is fruit juice. Our experiment showed that the discoloration from grape juice was a lot worse and longer-lasting, but it’s not likely to cause actual decay as quickly as the pop would. So that part of the experiment was a little confusing.

The bottom line is that the sugar, color, and acids in our drinks harm our teeth, and those effects are exacerbated by poor brushing habits.

Take this experiment a step further by brushing the eggs with a toothbrush and then with toothpaste and a toothbrush, to see how much of the stain can be removed from the egg and how much is left. It takes a lot longer than you think to clear away the stain, and you will probably find (as we did) that a lot of the stain is permanent.