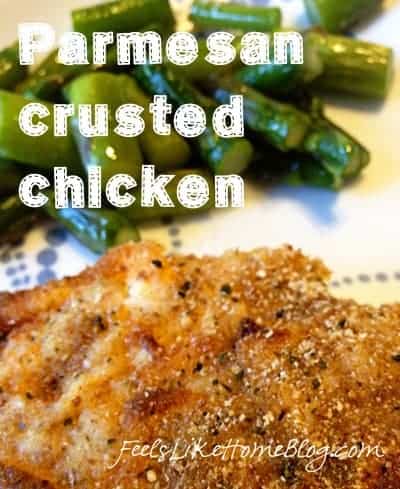 There is no food on earth that tastes as good as the food you pick from your own garden (or your dad's garden, as the case was for us today).

This afternoon, we walked to my parents' house and cut the first asparagus of the season. Less than two hours later, we were eating the tender, buttery stalks (roasted, of course) alongside parmesan crusted chicken breasts.

It was the kind of meal that makes you want to overeat because it just tastes so good.

Besides tasting amazing, this recipe is nice because it takes a little less than a half hour to prepare. Including the time we spent washing and chopping the asparagus, we had dinner on the table in less than 45 minutes.

This website uses cookies to improve your experience while you navigate through the website. Out of these, the cookies that are categorized as necessary are stored on your browser as they are essential for the working of basic functionalities of the website. We also use third-party cookies that help us analyze and understand how you use this website. These cookies will be stored in your browser only with your consent. You also have the option to opt-out of these cookies. But opting out of some of these cookies may affect your browsing experience.
Necessary Always Enabled
Necessary cookies are absolutely essential for the website to function properly. This category only includes cookies that ensures basic functionalities and security features of the website. These cookies do not store any personal information.
Non-necessary
Any cookies that may not be particularly necessary for the website to function and is used specifically to collect user personal data via analytics, ads, other embedded contents are termed as non-necessary cookies. It is mandatory to procure user consent prior to running these cookies on your website.
SAVE & ACCEPT
36 shares