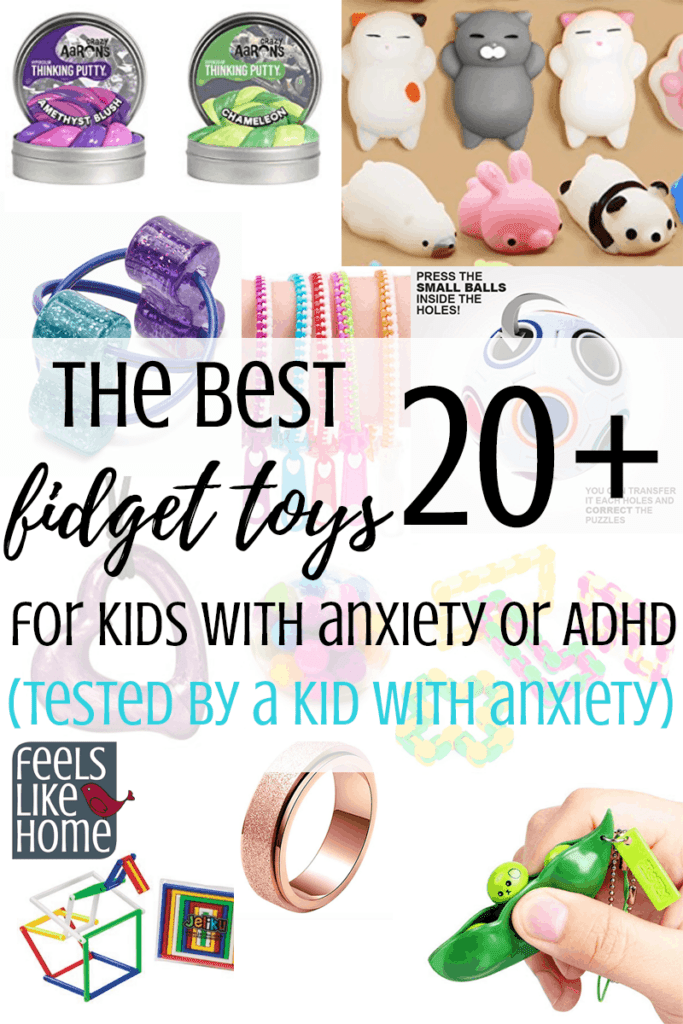 The best fidget toys for kids or teens with ADHD or anxiety - These calming toys are good for children and adults at home, school, or work. Most are quiet, silent even, so they can be used in preschool, in a traditional classroom, or any situation. Great way to calm down.

My Gracie loves fidget toys and always has. She plays with them constantly, while reading, while watching tv, anytime she's sitting still including in the car. All. the. time.

As I have written many times before, she suffers from an anxiety disorder. She has anxiety about all sorts of different situations, and she sees both a psychiatrist and a therapist to help her to manage.

Before the last month, we never had a reason for her fidgeting. In fact, her psychiatrist said it was ADHD (but I have always disagreed). The therapist, who we started seeing only recently, suggested something different entirely. She suggested that the fidgeting helps Grace to deal with her anxiety in a very unobtrusive, unconscious way.

I'm all for her doing whatever helps her to deal, so I have continued to encourage her to fidget all she wants. I've been buying her fidget toys for years, and I allow her to spend her birthday and Christmas money as well as allowance dollars on fidgets if that's what she wants. (And it always is.)

Grace herself made this list of the best fidget toys for kids. This entire post was her idea because she thought what she has discovered about her anxiety might help other kids.

The Best Fidget Toys for Kids With Anxiety or ADHD

Fidget toys are so good for a variety of kids, including those with anxiety, ADHD/ADD, sensory issues, and even just "normal" ones! They give kids something to do with idle hands and something to focus on during down times. Grace thinks they're great, and I agree.

If your kids love fidget toys (and what kids don't???), I'd love to hear in the comments below which are their favorites!

This website uses cookies to improve your experience while you navigate through the website. Out of these, the cookies that are categorized as necessary are stored on your browser as they are essential for the working of basic functionalities of the website. We also use third-party cookies that help us analyze and understand how you use this website. These cookies will be stored in your browser only with your consent. You also have the option to opt-out of these cookies. But opting out of some of these cookies may affect your browsing experience.
Necessary Always Enabled
Necessary cookies are absolutely essential for the website to function properly. This category only includes cookies that ensures basic functionalities and security features of the website. These cookies do not store any personal information.
Non-necessary
Any cookies that may not be particularly necessary for the website to function and is used specifically to collect user personal data via analytics, ads, other embedded contents are termed as non-necessary cookies. It is mandatory to procure user consent prior to running these cookies on your website.
SAVE & ACCEPT
5.5K shares