You are here: Home / Recipes / Ham and Rice with Apples – Leftover Ham Recipe 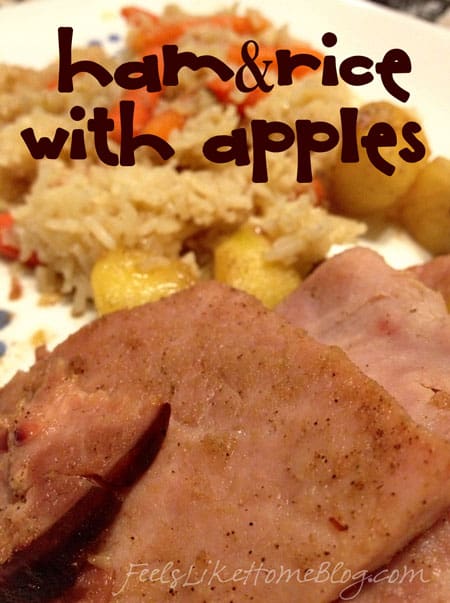 What’s the best thing about any big, family meal?

Besides spending time with your nutty family, I mean. Don’t worry. We all have one.

The best thing isn’t having a clean house (for five minutes) or having sleepy, worn out children after an afternoon of togetherness.

They’re both nice, but not the best thing.

It’s leftovers. I eat leftovers almost every single day for lunch; we intentionally make enough food for two meals each time we cook.

But then after a really big meal, we’re still eating leftovers two or three days later.

I get completely sick of those leftovers.

Unless it’s green bean casserole or buffalo chicken dip. I never get sick of those.

Back to my point.

After a recent family dinner, we had a lot of leftover ham. It was a nice ham, but it had gotten a little dry and I was not excited about eating it after the second meal of dry ham and mashed potatoes.

I might have said so, and that led Joe to work some magic.

He found a recipe in The Taste of Home Cookbook

we got for Christmas. We liked this recipe so much that we’ve had it a few more times with frozen leftover ham. It’s awesome.