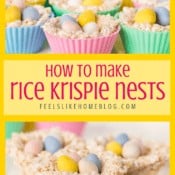 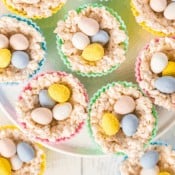 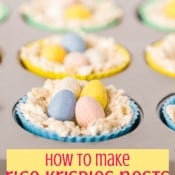 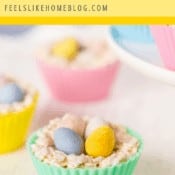 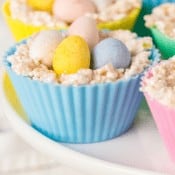 Rice Krispie nests are simple and easy and impressive! Packed with jelly beans, Cadbury mini eggs, or other small candies, the nests are a perfect Easter treat.

One day last week, the girls and I were driving somewhere when Grace said, "Mom?"

"You know the church where we have Kids Time? Well, they had Rice Krispie nests with these little jelly beans inside for eggs, and I wasn't allowed to have one. They said {insert attitude-y voice} 'You're allergic to latex, so you can't have one. You can have a lollipop instead.' {end attitude-y voice} I didn't want a lollipop! I wanted a nest! I don't understand why I couldn't have a nest. Nests don't have latex in them. And the doctor said I'm not even allergic to latex, so what's the big deal?! But they wouldn't let me!"

Typical of any 5-year-old drama queen, her arms were waving, and her tone was appropriately outraged. I asked some questions, because I couldn't understand why she wasn't allowed to have a nest, either. It didn't make any sense to me, but whatever.

This was an easy fix. I had ruined Allie's shoes the day before and was planning a trip to Walmart on the way home anyway, so I told Grace we would pick up the ingredients for Rice Krispie nests. And we did.

We stopped at my mom's house on the way home, to show off the girls' new shoes and visit for a minute. While we were there, Grace told my mom that this whole Rice Krispie nest business happened during vacation Bible school.

I guess the timing doesn't matter since the point was the nests, and jelly beans are available in the store now.

When Allie collapsed on the couch in exhaustion, Grace and I took the opportunity to do some schooling and make Rice Krispie nests.

Despite my lengthy narrative below, Rice Krispie nests are really simple to put together. It only took us ten or fifteen minutes in the beginning, then a couple of hours to dry and set up.

How to make Rice Krispies nests 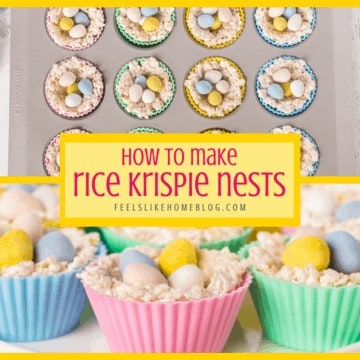 How to Make Rice Krispie Nests

Silicone baking cups work really well in this recipe and act like cupcake wrappers to keep each nest separate and contained.
Tried this recipe? Pin it for later!Follow @FeelsLikeHome or tag #FeelsLikeHomeBlog!
FacebookMessenger92Pinterest4TwitterWhatsAppEmail
96
SHARES