There are lots of different tongs out there, from light plastic ones to heavy metal and rubber ones. We have a few different kinds of tongs - a small bamboo set, a plastic set, and a heavy metal set. 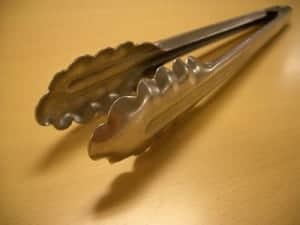 When I was writing this post, Joe chimed in with "Tell them to use tongs to pick up the dead rodents their cats drag in during the night."

I'm thinking he's done that before.

I shudder to think of it. I hope there was bleach involved afterward.

What do you use your tongs for?

Please don't say you pick up rodents with them. That totally grossed me out.

Have you seen the rest of this series?