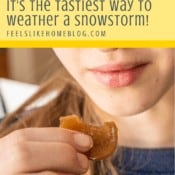 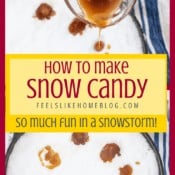 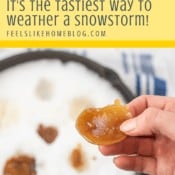 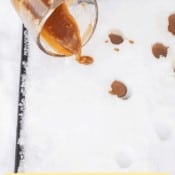 How to make maple syrup snow candy - This quick and easy recipe is just like Laura Ingalls Wilder made in Little House in the Big Woods. All you need is syrup and butter to get delicious caramel candy! It's the most fun and tasty thing you can do in a snowstorm or blizzard!

Last night, we went to bed with about 2 inches of snow on the ground. Joe shoveled the driveway and Grace played with her little shovel by the glow of the car's headlights. Afterward, we rode sleds in the backyard in the mostly dark. There was just enough snow to make the grass slick and make the sled fly.

It's never completely dark when it's snowing that heavily, you know? The snow glitters and sparkles as it falls. It glows.

We came in from the cold and fixed a bubble bath and hot cocoa for Grace. She enjoyed her chocolate in the bath, like a fancy  spa treatment. She thought it was great.

When Grace forced Joe and I out of bed a little before 6 this morning, we measured the snow.

I don't know what the official totals will be, nor what they have in the city, but we have a pile of snow and it's still falling. I think 22 inches of snow is too much for a 40-inch-tall person to play in.

We'll see. I mentioned on Twitter that there was a crazy amount of snow, and my friend suggested that we make snow candy, Little House in the Big Woods style. I followed her instructions which are below.

Have you seen my winter bucket list? If you have snow on the ground (or even if you don't), you should pop over and grab it! 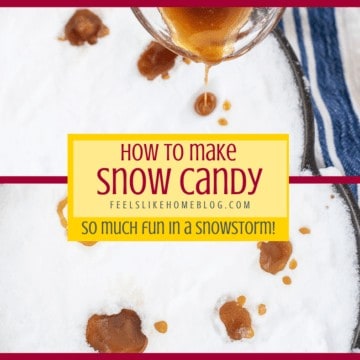 How to make maple syrup snow candy - This quick and easy recipe is just like Laura Ingalls Wilder made in Little House in the Big Woods. All you need is syrup and butter to get delicious caramel candy! It's the most fun and tasty thing you can do in a snowstorm or blizzard!
5 from 3 votes
Print Recipe Pin Recipe

Tried this recipe? Pin it for later!Follow @FeelsLikeHome or tag #FeelsLikeHomeBlog!
59FacebookMessenger254PinterestTwitterWhatsAppEmail
313
SHARES