You know those things that seemed like a good idea when you first thought of them, but then they turn out to be a little more involved than you expected?

This was one of those. 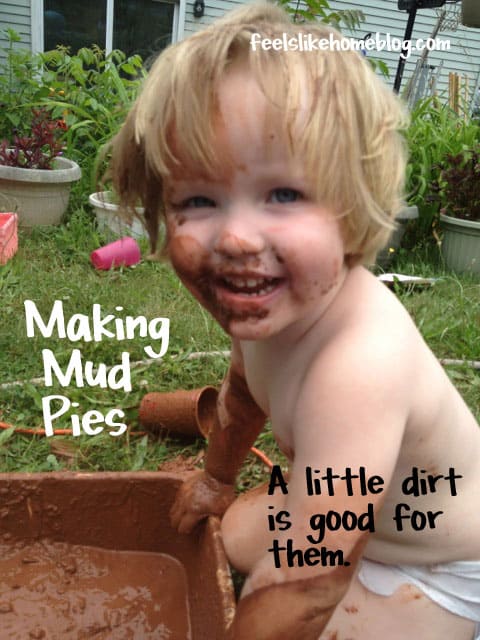 We live in suburbia. We have a third-acre plot of grass with a house in the middle. There's no field and no patches of bare earth, but we do have a tree row on one side that offers plentiful ticks and brambles.

We have no place for my kids to sit in the mud or play in the mud or even get dirty, unless you count the raised garden beds Joe built a couple of years ago. They are fenced and fortified, so there's no dirty play going on there, either.

We do have a spot in our yard that fills up with water during heavy rains, but even that doesn't get muddy. Swampy, but not really muddy.

Anyway. One day last weekend, I was planting flowers, and Allie got really excited about the mud created when I watered them in. After seeing her amazement, I decided that my kids needed to get muddy.

The kids were already in play clothes (we were gardening), so I asked Joe to fill a dish pan and a bucket with dirt (one for Allie and one for Grace).

I gave each kid a pitcher of water, and I showed them how to mix in the water a little at a time to make mud. Allie dumped her water in all at once and required more dirt. 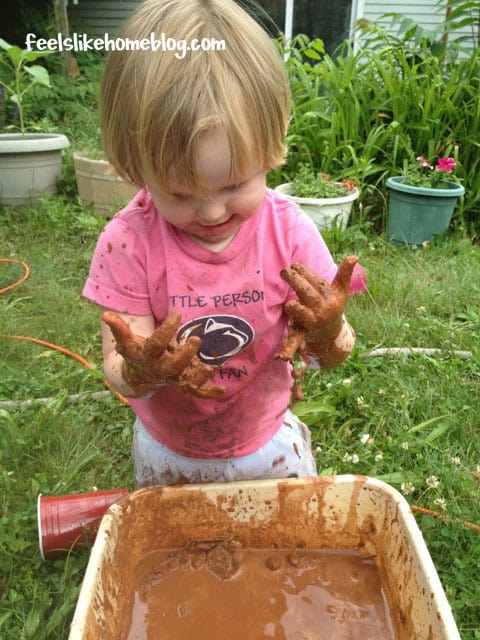 As soon as her mud was muddy, she began splashing it everywhere (all over both of us), and I realized that I hadn't properly thought this plan through. 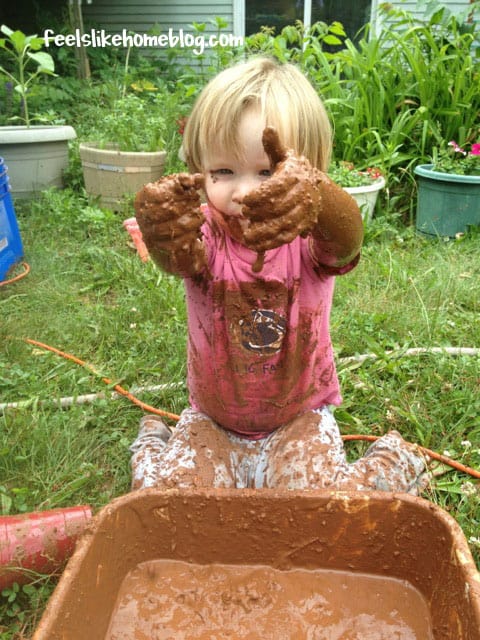 She squished and squashed and splattered, and we were both covered in mud in less than a minute. 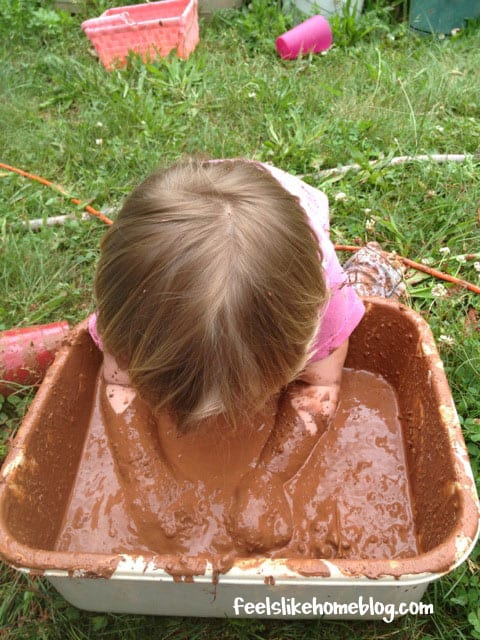 By the time she laid in the mud, I had no words left. I just sat in amazement and laughed. I didn't predict this pure delight from her. (She doesn't normally like to be messy.) 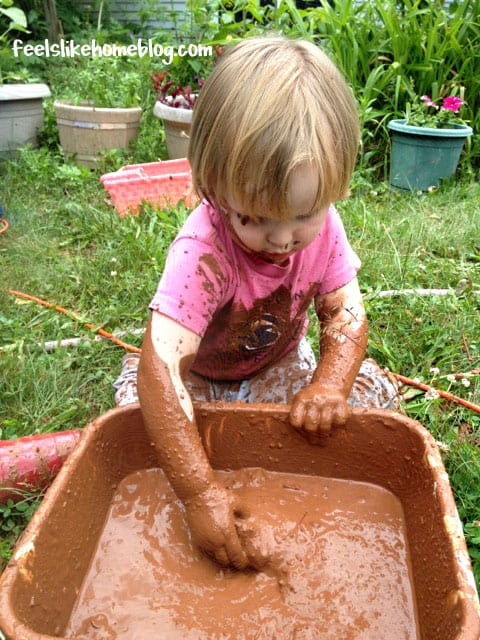 Her mud was too wet to make mud pies, but she made a tower of rocks in it. She scooped and poured it with her hands, a cup, and her watering can. 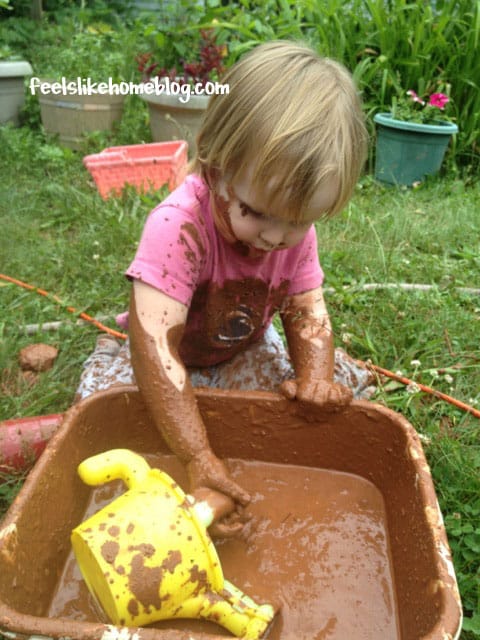 Grace wasn't nearly as eager or as vigorous in her muddy play, but she did play and did giggle the whole time. 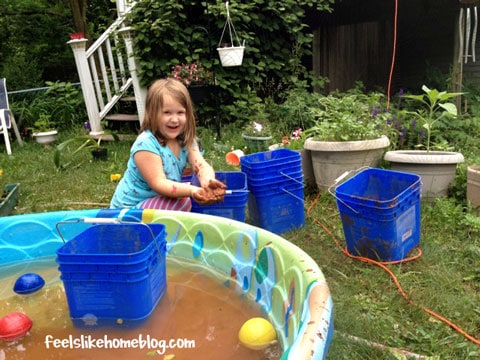 Our kiddie pool was starting to turn light green from algae, so I let the kids wash their hands and tools in the water. It was destined to be used as garden irrigation later in the day anyway. 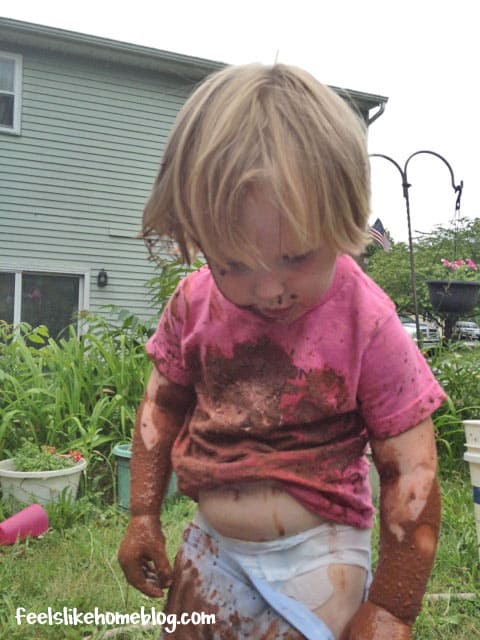 Once Allie's clothes were saturated, she told me,Ã‚ Clothes OFF.Ã‚ Being half naked didn't stop her from playing in the mud. 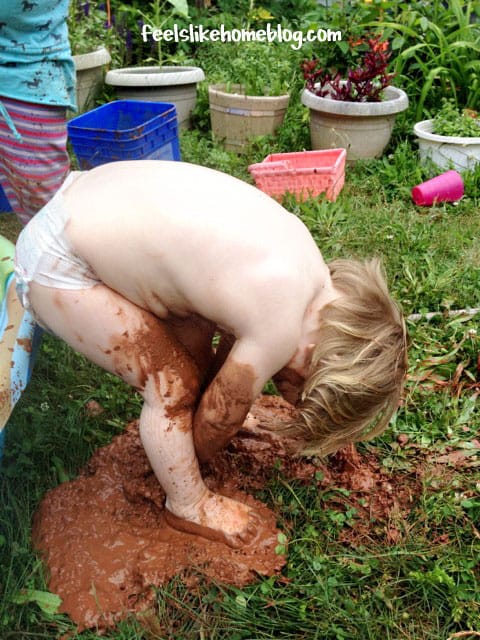 I stopped taking pictures when she said,Ã‚ Diaper OFFÃ‚ and subsequently removed it. They played in their mud and then got in the pool and played in the muddy pool water.

Allie, who usually has an attention span of two minutes (as is normal for a 2-year-old) played in her mud for almost an hour.

It was a giant pain to clean up (both from the kids and from the yard), but the girls' experience was worth it. We'll do this again, for sure.

Have you ever created mud puddles in your backyard?