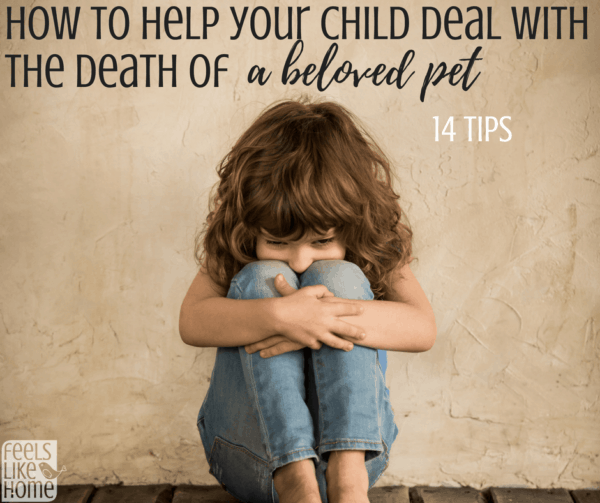 Last year in September, my beloved cat Sammy died. He was over 15 years old and had been with me since before I met my husband.

My kids both adored Sammy because he was gentle and friendly. The fact that his previous owner had had him declawed was a bonus for them as he never scratched them even when he deemed the kids to be too rough.

Sammy's death was difficult for all of us, but he was old and had lived a very long and very happy life with us, and we were able to appreciate that.

Every time I have lost a cat in my adult life, I have immediately gone out and replaced him with a kitten. Some people disagree with my methods, but I think it helps us immensely to refocus ourselves on a new joyous life instead of the big hole left in our hearts.

When Sammy died, we had a new kitten in 24 hours. Henry, the new kitten, was adorable, of course, but he was very shy and hid in the closet for three days. Afraid that this kitten was not going to be what we needed, a week later, I went back to the shelter and brought home a second kitten. 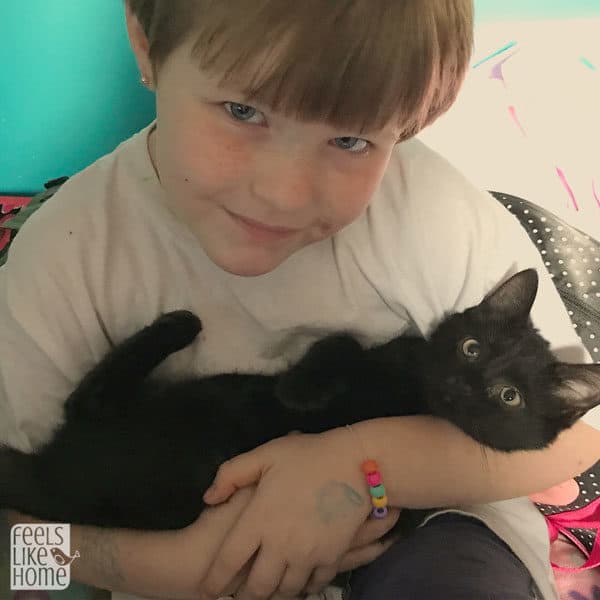 The second kitten, named Nittany after our college's mascot, was amazing. He was bold and outgoing and friendly. He wanted to be in the middle of the action, whatever anyone was doing. He loved being held upside down like a baby, having his belly scratched. He purred constantly, a loud rumbling purr. He wanted to be held most of the time, and the kids were overjoyed that they could pick him up, haul him around the house, and he never jumped down or ran away.

Nittany was an instant hit with our whole family (except for my husband who dislikes cats, but that is another story). 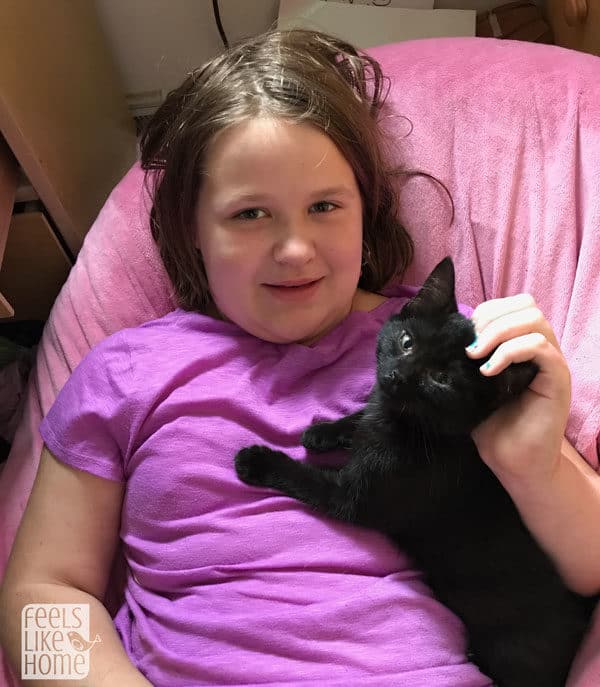 Nittany was mischievous as most kittens are. He somehow got under our dishwasher and scared the daylights out of my sister when she was cat-sitting. He climbed people's legs. He drank out of my water glass every time I set it down and taught all our other cats to do the same. He chewed all the Post-It notes on my desk and knocked the pens and pencils off onto the floor as he pranced around in all his glory.

The only problem with Nittany was that he died at 8 months old, just last week. It turns out that he had feline infectious peritonitis or FIP, an untreatable and fatal illness passed on from his mother in his early days. 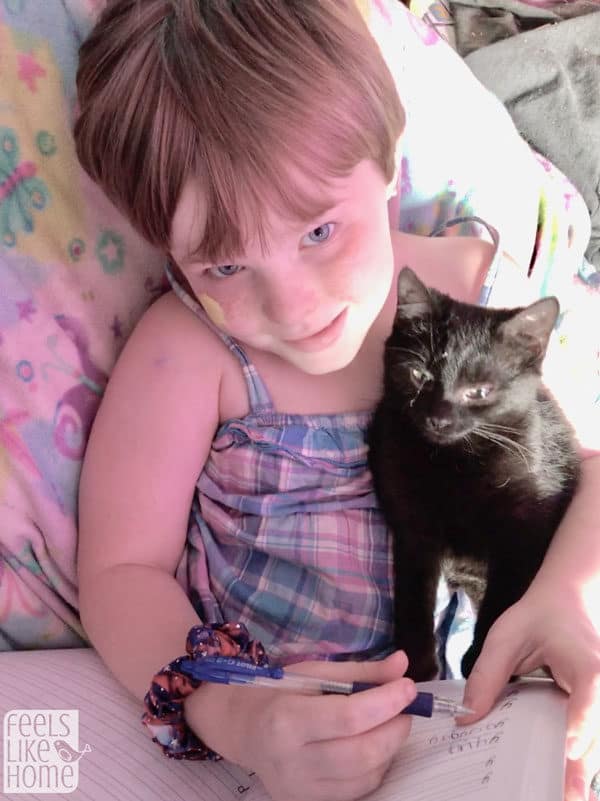 We had no warning at all. I took him to the vet because he had a snotty nose and was a little lethargic. I expected to bring him home with an antibiotic for his respiratory infection, but instead brought home an empty cat carrier and a set of Nittany's paw prints forever preserved in clay.

To say that my girls and I were devastated would be the understatement of the century. We have cried for days. Nittany had been a constant companion, a listening ear, an overflowing source of love and acceptance, and an eager playmate. 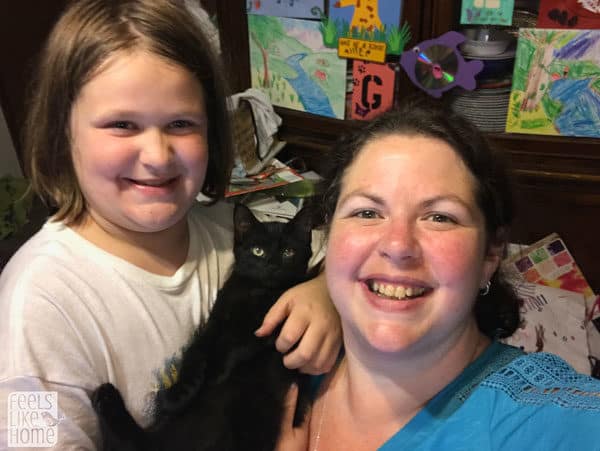 I could say the same thing about Nittany that I said about Sammy earlier, that I know he lived a very happy life with us, but it was different with Nittany. He was only with us for six months. 151 days. His time was painfully too short.

Nittany was our 5th cat, the bonus kitty that we didn't really want but felt we needed because Henry was so shy. Because we still have 4 cats, I made the incredibly difficult decision not to get a kitten this time. (I've always had 4 cats, and I like having 4 cats. I also wanted to have 4 children, but that is a matter for another blog post.) 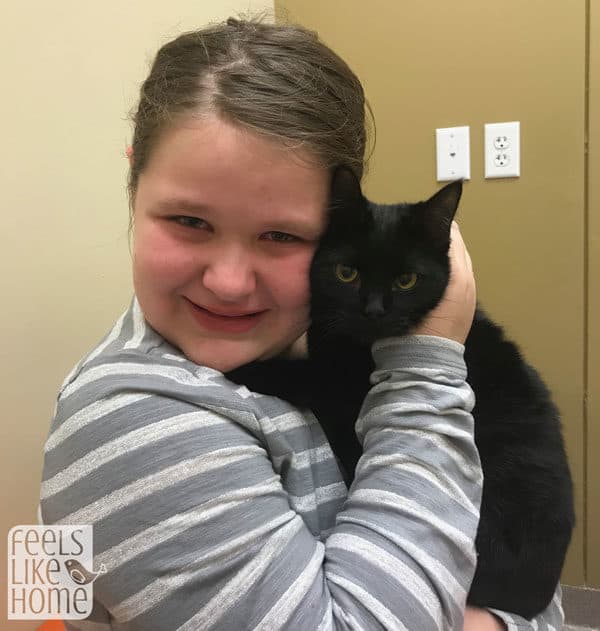 My girls are processing their grief in very different ways. 10-year-old Grace wanted to be with Nittany when the vet euthanized him. She caressed his head and cooed to him and alternately cried and wailed. 7-year-old Allie left the room and talked to the vet's receptionist about death and dying. She didn't want to see Nittany again at all.

In the days since Nittany's passing, Grace has mostly held it together, but she cries for hours at night. In a pattern I know so well, she puts on a strong face for the world, but she is hurting deeply inside, and that comes out only in the dark.

Allie has been very different from Grace. Allie is angry. She is not angry at Nittany; she is angry at the whole world. She has been violent, punching and kicking me and her sister and her dad. She asked me last night in the dark, "I feel like I have a hole in my heart, but I don't know why. Why do I feel so bad?" This afternoon, she laid in my office and wailed, "Why did he have to die? I miss him so much and I don't know what to do!"  She is feeling intense feelings that she's never experienced before. I affirm her feelings, and the tears start flowing again. She cries about the unfairness and how much she hurts and how she doesn't understand the world.

I think one of the hardest things that a mother can do is to watch her children hurt. I am sad for myself and my kitty, but my heart breaks for my children. There is nothing I can do to assuage their pain (except maybe get a kitten, but I don't think that's prudent right now). I can just be there with them, talk to them, affirm what they're feeling, and help them ride out the terrible, horrible, awful, very bad stroke of luck we received.

Your kids, as they process the grief of losing a beloved pet, will likely not be the same as my kids. Hopefully you will not get punched in the face. You will see their grief manifest in different ways, but I promise you, it will come out. You will see it in their behavior, even if they don't cry much or don't want to talk about it.

Here are some ways to help your child feel the feelings and get through their grief.

Saying goodbye to a beloved friend is never easy, whether he was a part of your life for six months or sixteen years. It hurts.

It is totally normal for kids, like adults, to mourn for varying lengths of time. Some may need a day or two, others may need weeks. Continue doing what you're doing - listening, validating, understanding, and hugging - for as long as they need.

At the same time, don't use grief as an excuse for bad behavior. You better believe that Allie experienced consequences to her punching me in the face, even though I knew the reason behind it was completely legitimate. Strong feelings are allowed. Hurting people is not allowed.

As with Allie, this death might be the first experience of its kind for your kids, and they will likely not know how to handle the strong feelings. You will have to guide them through with grace and compassion and while working through your own grief. 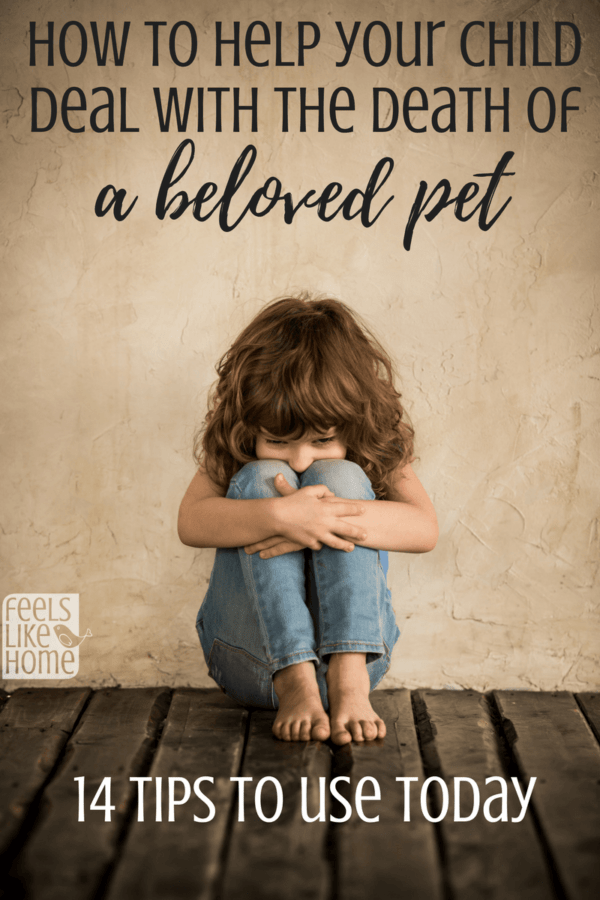