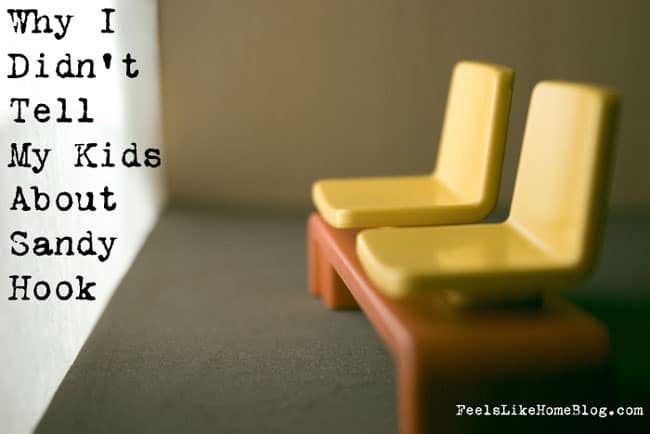 I'm a news junkie. I like to watch the 6 o'clock news and the world news after.Ã‚

Grace has been exposed to the news for most of her life. I filter a bit, especially things that I think would scare her, but mostly, she sees the realities of the world.

I don't think she really pays attention most of the time. Once in a while, she'll say something that makes me wonder if I shouldn't turn off the tv news and get my fix online instead.

It's happened with more and more frequency in the last year.

When I saw the Connecticut shooting sickeningly unfolding on Twitter, I turned the tv off.

We haven't seen a news program since Friday.

Somehow, I don't mind Grace hearing about local murders on the news, but I don't want her to hear about some far away.

I don't want her to believe that someone could walk into a school and murder kids just like her.

I didn't want her to start to think about someone walking into her Sunday School class or her ice skating lessons or the public library and killing her.

I do enough of that for the both of us.

I don't want her to think about this trauma every time she sees a school.

I know I will.

Grace asked why I turned the tv off that day, and I told her simply that something very bad had happened, that I didn't want her to have to think about it. She questioned a bit, but she has never asked what the bad thing was.

Over the weekend, when I was reading CNN and ABC News online, Grace asked if I was still reading aboutÃ‚ that bad thing. I said I was, and she asked why.

I couldn't answer her then; I didn't know. I just had to keep reading.

Like every parent who's familiar with this situation, my heart is heavy. My spirit aches for those mommas and daddies and grandmas and grandpas whose babies' last minutes on earth were abused by terror, panic, and suffering.

I think about all the intruder drills I sat through as a teacher, imagining how I'd stuff all of my kids into my supply closet if the drill were ever real.

I grieve for the teachers who did everything they could do to protect their kids (and it still wasn't enough) and for the kids who heard their teacher lie to save them and then listened to her die and for the one first-grader who survived while her teacher and her fifteen classmates died, huddled right there alongside her.

It's almost more than I can handle.

Grace believes in Santa Claus, the Tooth Fairy, and Cookie the Magic Elf. She believes that the world makes sense, that mothers and fathers take care of whatever their children need, that people are good, and that guns are for hunting food.

She believes that God protects us.

I'm not ready to explain that God's plan sometimes involves us going to heaven before we're ready.

I don't think she's ready to understand that our world is broken and badly damaged, that God doesn't always protect us, that sometimes mothers and fathers are impotent.

Is anyone ever ready to learn those lessons?