Because they ate breakfast before 7, my girls were ready for lunch by 10 yesterday. I made them a nutritious feast of chicken nuggets, baked beans, and fuji apples and had beans and rice myself.

I had a doctor's appointment, and Allie fell asleep on the way home.

By the time she woke up, it was almost 2 o'clock.

And they were both hungry again. 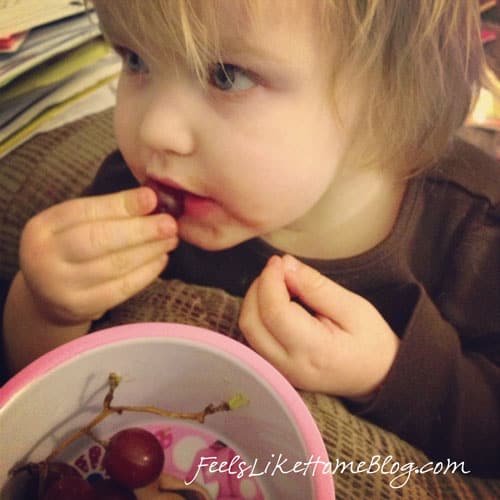 Grace asked for a pineapple Greek yogurt, easy. Allie wanted bay-ees (berries), which meant grapes or strawberries. I think she has them confused, so either will do.

"Allie, we don't have any berries. What would you like instead."

I texted Joe and asked him to buy grapes and strawberries on his way home.

"Allie, how about some yogurt?"

"Some chocolate bears?" She never passes up chocolate teddy grahams.

Well, crap, I thought. What else can I offer her?

"That's all there is. How about some of these?" I showed her the bears again.

I poured the bears into the bowl and handed it to her. She nibbled one.

Realizing that I was hungry, too, I carefully weighed out 30 grams of nut chips (my inexpensive alternative to gluten-free crackers), measured 6 tablespoons of hummus, and sat down at the table.

I've gained 4 pounds {ice cream and Girl Scout cookies mostly}, so I am being extra careful with my choices and my portions.

Allie sat her bowl of bears on the table, pointed to my chips, and grunted.

I handed her a chip, but she pointed and grunted again.

"Do you want some hummus?"

I smeared some hummus on her chip.

And she ate it.

I double dipped on her behalf.

She licked it off in one sweep.

We ended up eating hummus from the container together. Even Grace came along and shared in the nut chips and hummus snack.

As I watched my 2-year-old and 5-year-old lap hummus from their soggy baked chips next to a nearly untouched bowl of sugary bear-shaped crackers, I was hit in the head {not really} by what I'd done.

At first, I tried to excuse myself, rationalizing that chips and crackers are together on the not exactly healthy side of things, but then I read the labels.

The crackers I was pushing have 15 ingredients including sugar, dextrose {which is sugar}, maltodextrin {which is a non-sugar sweetener}, and calcium carbonate {which is chalk. Chalk?!}. The chips have 6 ingredients: rice flour, almonds, potato starch, safflower oil, sea salt, natural almond flavor.

I'm working hard on eating healthy foods myself, and I'm pushing cheap junk on my kids.

Before you leave me a comment saying how one snack isn't really that bad {Cindy, I'm looking at you}, do know that I feed my kids well a lot of the time. They eat a lot of fresh fruit, and I offer a lot of fresh vegetables {that they usually don't eat}. They drink plenty of low-fat milk and eat a balanced diet.

Starting today, though, I'm going to be more cognizant of all the other stuff, the snacky foods that they eat because we buy them, the junk that wouldn't be missed if it weren't here.

What do your kids eat for snacks?

This isn't a sponsored post, but since I know I'm going to get emails about the brand, here are the nut chips I buy on Amazon. We get ours at Walmart because they're cheaper.