Most days of the week, my girls wake me up in the morning. They are naturally early risers, and I have narcolepsy, which would allow me to sleep approximately 20 out of any given 24-hour period.

I make my best effort to sleep lightly, but it never matters and the children run amok for at least a few minutes before they think to come and rouse their mother.

Not long ago, their amok running involved a bag of sour cream and onion potato chips in my bedroom.

Sometimes, they find their own breakfast.

The bag of potato chips remained under my bed for a week. I sorta knew they were there, but I'd mostly forgotten.

The next Saturday, I was cleaning in my bedroom (or more accurately, wrestling it back from the depths of a mess of cat excrement and laundry in various stages of dirt). Joe was helping me, and the girls were playing on the bed.

They got hungry, and I'm sure you can see where this story is going.

Grace fetched her stored away potato chips and commenced eating them and feeding them to her sister. She's nice like that.

I paid no attention to the potato chip eating because I know my children and their hungry bellies, and I knew they wouldn't leave more than crumbs too small for mouses. (Do you know what book and movie that's from?)

Joe saw the potato chip eating and immediately took the chips away. The children began throwing themselves a temper tantrum, and Joe left for church band practice.

I, of course, went to the dining room as soon as he was gone, and I retrieved the potato chips and returned them to the children.

Yes, I know this is a problem.

The children went on happily eating their potato chips, and I went on removing crap (literally and figuratively) from the floor of my bedroom. I was engrossed in what I was doing, having found a mostly clean book that I'd made during student teaching. I read through it, hoping to find some nuggets that I might use in homeschool.

Apparently, I got too engrossed.

And don't know my children quite as well as I thought.

When I looked up, Grace and Allison were jumping in an enormous pile of potato chip crumbs.

In the middle of my bed. 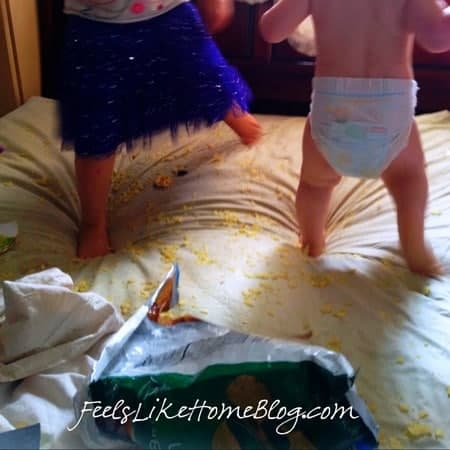 Having either dumped out or spilled the entire bag, they jumped and jumped in the pile, pausing to nibble here and there. By the time I noticed what was happening, there were few pieces bigger than a dime.

But there sure were a lot of pieces.

I stood at the end of my bed, completely dumbfounded by the children with whom I spend very nearly every waking moment of my life.

They played. They jumped. They reached down and grabbed huge handfuls and threw them up into the air like snow on a cold winter day. There were potato chip crumbs all. over. my. bedroom.

After what felt like five minutes of complete paralyzation (which really can happen with narcolepsy), I yelled at my children, "WHAT ARE YOU DOING?!" I have yelled at Gracie Anna a sum total of 3 times in her entire life, and none at all at Allie, so my erratic behavior took them by surprise.

They stopped and looked at me. We all looked at each other for a long moment, and then they returned to frolicking.

"I was just doing what you said, Mom. I was cleaning up."

Allie was still running and jumping in potato chip crumbs, and I could see no possible solution to this problem. So I did what any partly reasonable person would do, and I said, "We are going to Grandma's!"

Fortunately, Grandma lives less than a ½ mile away, because I didn't even put shoes on my children. We went to Grandma's house, and I told her my problems (which of course, involved only two crazy children, potato chips, my bed, and a series of bad decisions on the part of one parent {who is me}).

Grandma feigned indignation, but I think she was secretly laughing at the whole thing.

I can now laugh at the whole thing, too, because I am far enough away from it to be over my anger that my 5-year-old would have such bad judgement.

That I would have such bad judgement.

No more crumbly food in the bedrooms.