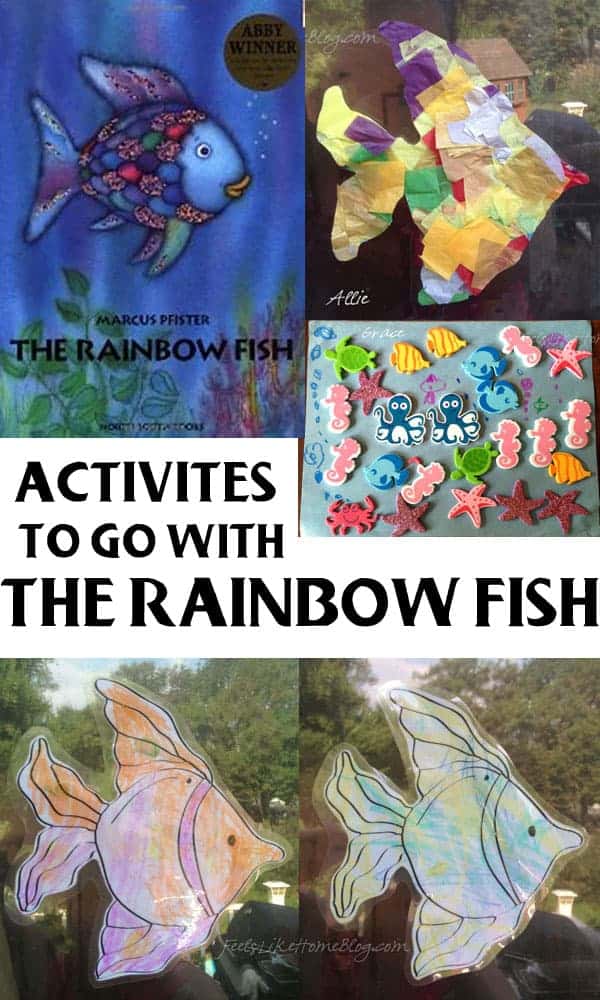 Have you ever heard of The Rainbow Fish by Marcus Pfister? It's a beautiful (and controversial) children's book about a fish who learns to share. I read it to my niece when she was a little girl, and now I'm reading it to my girls. I love when that happens!

A few weeks ago, we participated in the Love Books Summer Book Exchange. We created a package around the book Tiger, Tiger by Dee Lillegard, and we mailed it off to Cassie from 3 Dinosaurs.

Cassie and her kids sent us a package, too. Their book was The Rainbow Fish, and they included three separate activities about beautiful fishes.

Here's what was inside the box from Cassie: 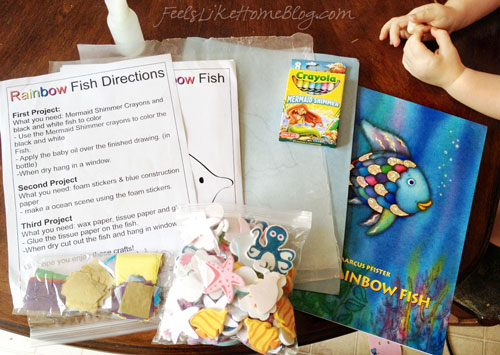 The first thing we did (of course!) was to read the book. As I said above, I love this book, and the controversial points never occurred to me until I read about it in the book's reviews on Amazon.com.

In short, the book is about a fish who has beautiful, shimmery scales. He thinks he's better than all of the other fish because of his fancy scales, and he has no friends (because he is vain and aloof). Through the course of the story, he wants to make friends, seeks the counsel of a wise octopus, and gives away his scales one by one until he has only one left. By the end of the book, he has learned that relationships are more important than any material things.

Grace loved the story, too, and she said it was like how Jesus gave His life to save all the people of the world. (This kid!!!) I told her that was a great interpretation, and that the interesting thing about literature is that everyone interprets the story differently based on her own views and beliefs. I mentioned that some people think the book is about sharing or friendships or attitudes, and I went on to explain some of the positive interpretations. She helped me to come up with even more themes and morals.

Then I said that some people think this isn't a good book for kids because the fish has to change in order to get people to like him. She thought that was silly because he had to change - he was conceited and mean and you have to be nice to make friends. I also explained a wee bit about how he had to give away his things to get people to like him, and she explained that away. Finally, I said that he was special and had to become ordinary to have friends, and she again said that was silly because it was his attitude that was the most important thing.

I know that not every 6-year-old is capable of having this kind of meta conversation about a picture book, but I was elated that Grace and I were able to have such a detailed talk about the interpretation of literature. It was really special to me.

Allie was napping during this time, so when she woke up, we set to work on the projects Cassie sent.

The first project was to create an ocean scene with animal stickers. Both of the girls loved this, and I had to split the stickers exactly in half so they each had the same number of seahorses and blue fish and yellow fish and octopi and turtles and so on.

They are very cognizant of what is fair these days. 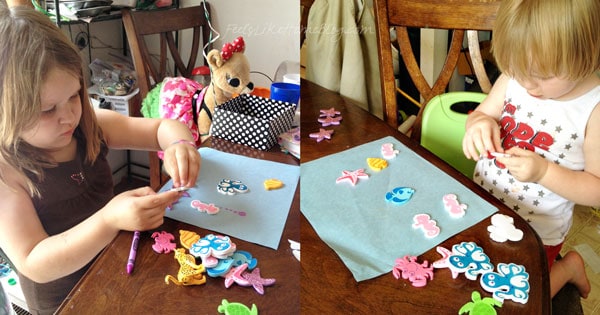 I tried to get them to draw scenes and then put their stickers on, but they didn't want to do that. Their scenes were less scenes and more a whole bunch of stickers covering every possible space on the paper.

It's their art, right?

For this project, Cassie wrote that the girls should color their fish coloring pages with the shimmer crayons and then smear baby oil all over the pictures. I had never done anything like this before, but I guessed that it would make the pictures transparent, like sun catchers (and that is what happened).

First, both girls colored their pictures. 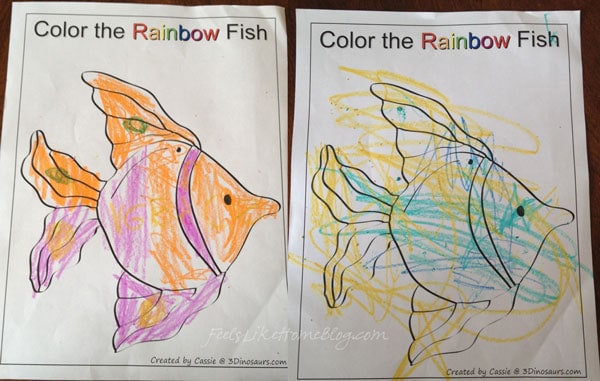 Then we dripped baby oil onto the pictures. We did one drop at a time so that we wouldn't have a giant baby oil mess all over the kitchen.

You can easily see where the baby oil is and is not - it makes the paper transparent.

Make sure you have something slightly absorbent under the pictures so that you don't have to clean baby oil off of your work surface.

After applying the oil, I thought the fish were to fragile to hang up. I put them through my laminator to make them sturdier. It made them less transparent, but they won't get oil on whatever surface I hang them on and the paper won't tear.

I really love these. They'll be hanging in our kid art gallery for a long time. 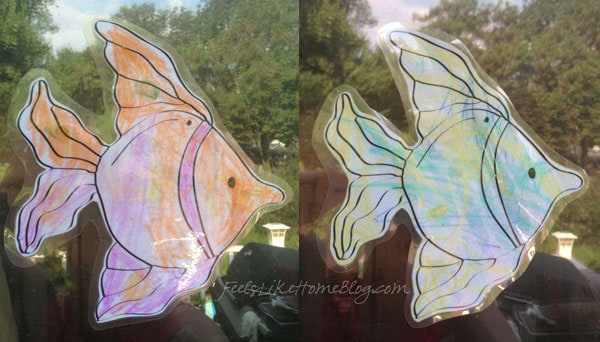 The third project was to glue tissue paper squares to a fish outline on wax paper.

If I were doing the project, I would have glued one thin layer of tissue paper to the wax paper. Perhaps, I should have done this ahead of time to show the girls how it would look like stained glass, with the light shining through. I didn't.

Because they are just like me, both of my girls subscribe to the more is better philosophy. They each glued on about thirty layers of tissue paper. 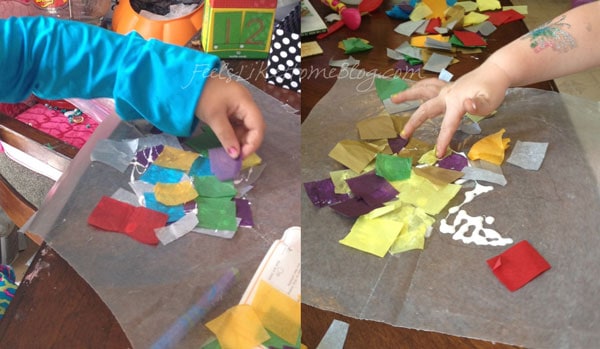 Thirty layers of tissue paper and thirty thick layers of glue took forever to dry and was nearly impossible to cut.

Nonetheless, I did get them cut out, and they are hanging up with the crayon fish above. 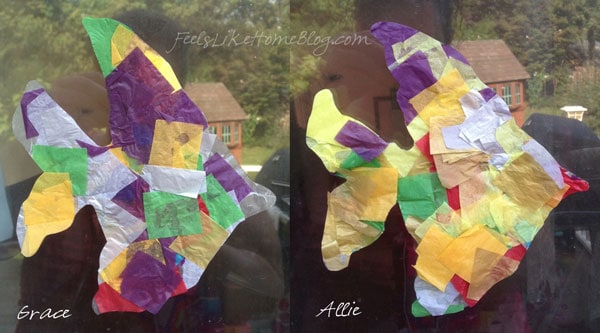 The above projects were really fun for both Grace and Allie. Here are a few other ideas for further Rainbow Fish study:

Language arts - Have your child retell the story orally, write a summary, create a comic strip of the story, or write another story with the same characters. Have her summarize the book in one or two sentences, write a letter recommending the book to a friend, or make stick puppets and act out the story.

Language arts/foreign languages - The Marcus Pfister page on Amazon lists five more books in The Rainbow Fish series. The original book is from Sweden, and there are versions in several other languages. (If you decide to do an author study, I highly recommend Milo and the Magical Stones, which is a very rich story about doing the right thing. It has 2 different endings in the same book, the happy ending and the sad ending, and it leads to lots of discussions on everything from morality {including what do you do when no one is looking?} to the mechanics of writing a story. I may have to write a whole post on this one because I really love it.)

Language arts - The theme discussion that Grace and I had above was great for her understanding of literature and interpreting book themes. You could also do activities related to the elements of a story or a problem/solution graphic organizer.

Language arts - Help your child to make a mini book with the traits of a good friend.

Social studies - Create a map of Rainbow Fish's part of the sea.

Math - You could do your normal math manipulative activities with goldfish crackers or Swedish fish candies. If you look, you can find both in multicolor packages. You could also do some shape play, making fish from pattern blocks or from shapes you cut out of colored paper.

Science - You could study different kinds of fish, focusing on those with iridescent or rainbow scales. You could also study octopi and sea stars, as they are characters in the book. You could also learn about the physical ocean - different zones, the continental shelf versus the deep ocean, that sort of thing.

Character - Make a fish-shaped poster and write the traits of a good friend on each of the fish's scales. You could also make gifts for a family member or items for a charity. The options here are limitless. There are charities that distribute kid art to people in nursing homes, charities that distribute care packages to soldiers or the homeless, and charities that send stuffed animals to terminally ill children. You could gather up unused toys or books and take them to the Salvation Army or a similar charity. Or go spend some time reading to the blind, cleaning at an animal shelter, or serving food to the needy.

Or, of course, you can always find a Rainbow Fish activity on Pinterest. There are hundreds of them.

This website uses cookies to improve your experience while you navigate through the website. Out of these, the cookies that are categorized as necessary are stored on your browser as they are essential for the working of basic functionalities of the website. We also use third-party cookies that help us analyze and understand how you use this website. These cookies will be stored in your browser only with your consent. You also have the option to opt-out of these cookies. But opting out of some of these cookies may affect your browsing experience.
Necessary Always Enabled
Necessary cookies are absolutely essential for the website to function properly. This category only includes cookies that ensures basic functionalities and security features of the website. These cookies do not store any personal information.
Non-necessary
Any cookies that may not be particularly necessary for the website to function and is used specifically to collect user personal data via analytics, ads, other embedded contents are termed as non-necessary cookies. It is mandatory to procure user consent prior to running these cookies on your website.
SAVE & ACCEPT
139 shares