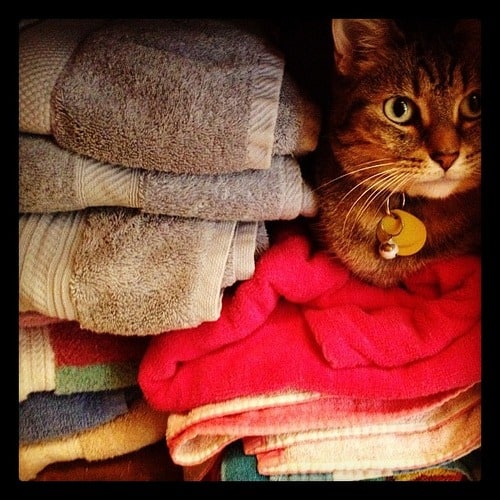 I have a linen closet in my upstairs hallway.

It's been like that for a long time, maybe a year.

It's not blocked open exactly. The door closes to the frame, but the closet is stuffed too full for the door to latch.

Il y a longtemps, my friends. Plus longtemps. (I'm reading a biography of Marie Antoinette. French is fresh in my brain.)

Today, I discovered some fancy beads (big, clunky ones with sparkly stones, perfect for my large wrist) that I had gotten on clearance at the craft store when we went looking for pinewood derby supplies.

I knew my beading kit was at the bottom of the linen closet. If I was going to make the bracelet, I had to take everything out of the closet.

If I was going to be taking everything out of the closet, I might as well sort it, too.

So, armed with a giant black plastic donate bag, I began pulling things out.

I never think about taking pictures of these adventures until I'm almost done. It's probably my subconscious mind's way of hiding my glaring inadequacies in the areas of stuff, home organization, and cleanliness. The before picture was ugly, friends.

In the end, I filled two of those giant black garbage bags from that one little closet.

In them were a half-dozen crib sheets (No one sleeps in the toddler bed because everyone sleeps in my bed. Anyone want to buy a very cute purple race car toddler bed? It's priced to move.), 2 complete sets of sheets that don't fit any bed in the house, 4 fitted sheets without matching top sheets, 8 top sheets without matching fitted sheets, countless hand towels (We haven't used a hand towel in 7 years. Why start now?), and a few threadbare bath towels.

I have seldom looked twice during this many year-long purging process:

Those are the only times I can remember wishing I hadn't donated something, and I have donated 3-6 of those giant black bags full of stuff (sometimes more) every month for most of the last two years.

Back to my towels.

We have too many towels.

We need a lot of towels, with Hersheypark passes and swimming pools in the summer, but we still have too many.

And they're almost all nice and thick and big and pretty.

All of them except 5.

2 of the 5 were old and dirty, the kind you'd use for spills in the garage.

The other three were thin and almost see through, but they were mine from when I was a kid.

I had 3 towels when I was little - a white Mickey Mouse towel, a many-colored hot air balloon towel, and a black penguin towel. My sister had exactly the same ones. They have our names on the tags because we took them to Girl Scout camp and church camp.

And also because we fought over whose towel was whose.

My 3 childhood towels are old and thin and practically useless.

I put them in the donate bag, slowly, with tears in my eyes.

There wasn't enough room in the closet for all the towels. Some of them had to go.

It didn't make sense to keep them and get rid of nicer, thicker, newer ones. That would have been ridiculous.

They made me think too hard about my relationship with my stuff and why these three silly old towels would make me cry.

But they did make me cry. I'm thinking about running out to the garage in my nightgown to retrieve them from the donate bag and stuff them in the back of my closet where the cat can lay on them and my heart will be happy again.

I eventually got to the bottom of the closet, and I found my beading kit. It turns out that I couldn't make the bracelet because the beads were too heavy for the elastic cord I had.

I learned today that I have 16 tablecloths (but they all fit in the tablecloth bin, so I didn't feel the need to dump any of them). I also discovered a set of towels with cats in Santa hats (moved to the Christmas decorations) and all my missing pillowcases.

PS. The cat is dozing in a fine bed made of 3 old, worn out bath towels.