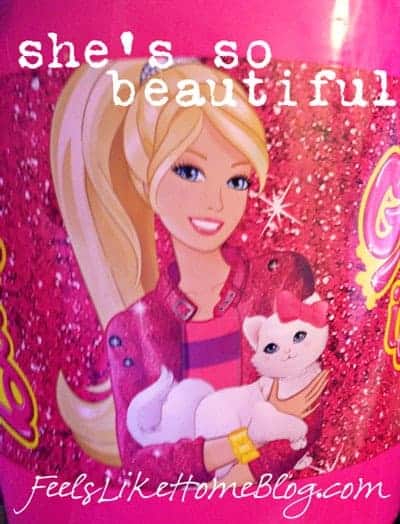 "That does look like Sissy, doesn't it?" I said, noting the pretty blond hair, the high eyebrows, the light eyes, the pink lips, and the bright smile. It did look like Grace, like the best version of her.

Yes. Tha' Sissy.Ã‚ She declared as if she'd solved a complex puzzle.

"Aww, isn't that sweet?" Grace said. The tone of her voice sounded almost incredulous. I wanted to pry, to ask if she believed she's so pretty, but I was afraid.

I was afraid to crack the foundation of her modest confidence. I worried that asking if she really believed she looked like that would make her question whether she should.

If she does believe she's so beautiful, I know that it's fleeting.Ã‚ All too soon, she will understand that she isn't pretty enough, that she doesn't measure up, that she should be thinner, taller, better.

That's what we all believe, isn't it?

At some point, we stop being the best version of ourselves, the beautiful and strong and perfect version, and we start being too fat, too plain, too slow, too imperfect.

We measure ourselves against theÃ‚ airbrushed bodies we see in magazines and on television, against the Barbies in our minds.

Real can never be good enough.

I remember exactly when I saw the painful truth. I was in third grade.

I have been rotund since birth. It was just how I was; I saw no shame in it.

There were snickers that day that my shorts were too short, my body too big. I heard them for the first time, walking from the classroom closet to my desk.

My eyes were opened to a truth so ugly that it changed my entire view of the world.Ã‚ I realized that I was fat and everyone else was normal.

I would never again be beautiful in my own eyes.

As an adult, I can say that those words don't matter. They're just words, and I am lovely and powerful and perfect.

I can say it every day, but I still don't believe it.

As much as I try, I know I can't protect Grace and Allie from hearing the bad stuff. It's not possible.

I can only try to build a thick shell of confidence around them, to build them up into girls impervious to inevitable insults from kids and photos and humanity.

Can any amount of doting mom compliments deflect theÃ‚ hey uglyÃ‚ of an unkind world?

I hope it can; it's the only hope I have.