For a year or more, Grace has been inquiring about the color of her poop.

I'm not sure how it started. I think she was being really uncooperative during a diaper change, and Joe asked what color she thought the poop would be. She said pink. 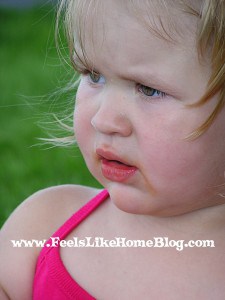 PinShe's been waiting for pink poop ever since. As you might imagine, it hasn't happened yet.

Grace has started sticking things in her orifices. Nose, mouth, belly button. It's like she's a year old again, and experimenting with textures.

We've been talking about it.

She doesn't really get why she shouldn't stick things in her nose, mouth, and belly button, but she doesn't put up a fight when I redirect her.

Earlier, Grace and Joe were playing with Play-Doh. They made leaves and fish and flowers and all sorts of shapes.

Which Grace stuck up her nose.

"Grace! What are you doing?" I screeched. "Get that out of there!"

She giggled and stuck her finger in her nose to remove the Play-Doh.

Except it didn't work.

Her finger pushed the Play-Doh peas further up into her nose.

"Lemme see, honey." I said, trying to stay calm, but secretly worried that we were going to have to head off to the ER. I looked up her right nostril and saw not one, but three large, pea-sized balls of pink Play-Doh.

At her urging, I stuck my pinkie finger into her nose, and I tried to dislodge the Play-Doh. The lower two fell out, but the last one went up further.

Joe came over, "How about tweezers? Can you get it out with tweezers?"

I tried the tweezers anyway. I got a little piece of the Play-Doh pea, but not the bulk of it. Plus, her screaming intensified.

I held her, and I patted her back.

With my other hand, I Googled "Play-Doh stuck up nose." There were practically no results. What I did find said either Get thee to the ER! or Wait it out, the foreign body will probably come out on its own.

My next plan was to try saline spray. Joe restrained held Grace while I sprayed copious amounts of saline mist into both of her nostrils. Almost immediately, she started to sputter and cough.

"Her nose isn't clogged," I quipped.

"This is going to be funny later on," Joe grinned.

I have a runny nose, Grace whined.

When I wiped her nose, the snot was pink. I was hopeful that the Play-Doh might be melting and running out her nostril.

"Look, Grace! Pink snot!" I said, hoping to calm her down.

She sniffed. I have pink snot?

She did, and lots of it. Joe and I were relieved that the offending substance was gone from her nostril.

Her nose ran pink for a few minutes, then clear. We were sure the incident was over.

I looked at Grace ten minutes later, and there was the big old Play-Doh pea peeking out of her right nostril.

"Grace!" I yelled, loud enough that she started to cry again.

I grabbed a tissue, wiped her nose, and showed her the big ball.

Immediately, she began to giggle and then roll with laughter. I have pink boogers! Pink boogers! Can you believe it, Momma?

I'm worried that the funny ending might have negated the lesson she learned about shoving things up her nose. Time will tell.