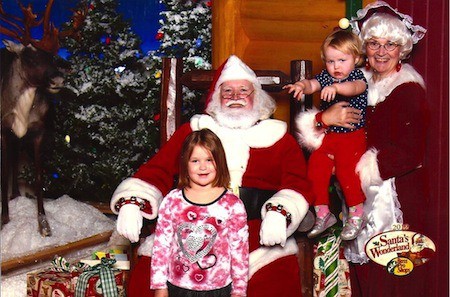 This photo is from Bass Pro Shops.

I've been sitting on this post for two days, hoping that my feelings about it would fade and I'd just send it to the trash and forget the whole thing.

I'm so not about drama, and the first half of this post is all drama. If you want to skip the drama, head down to the Bass Pro Shops heading.

On Monday, my car's battery died, and the girls and I went to Sears to have it replaced. The technician said it would take an hour and a half or two hours.

We walked around the Capital City Mall for a little while and painted pottery at Color Me Mine. After painting, Grace asked if we could stop and see Santa.

I'd picked up a coupon at Color Me Mine for $3 off any photo with Santa package, and I said she could.

Santa was lovely. He is 100% Santa. He has a quiet and kind nature and a real (cool) beard. Grace was enamored and climbed easily up on his knee (for the first time in her whole life). Allie wasn't sure about Santa, but she let me set her on his other knee.

I confirmed with Xavier, the assistant manager of the photo shop, that my coupon would make the smallest photo package $16.99. He said it would, so I agreed to get it - one 5x7 and two 3x5s.

The girls finished their visit with Santa. He gave them little coloring books and sent them on their way.

And then Xavier said he couldn't honor my coupon. The one with Capital City Mall and expires December 14, 2012 printed on it. The official mall coupon I'd picked up minutes earlier in a mall store.

We bickered a bit about the coupon, and Santa came over. "Just give her the discount," he urged.

Xavier was firm. He called his manager, and they agreed that they'd give me a free 5x7 photo and charge me the regular price.

The photos were lousy, and I didn't want an extra 5x7 photo.

What made them lousy?

Xavier called his manager back and told him that I didn't want a free photo.

Then he handed me the phone.

I politely but firmly told him that I wanted the advertised price, not a free photo. At this point, he became rude and eventually hung up on me.

Xavier had a few more words for me, and I told him I wasn't paying full price for the photos. I put the photos on the counter and left.

The woman at the mall's customer service center was appalled by the treatment I'd received, and she promised that either she or the mall's Marketing Director would get back to me by the end of the day.

No one got back to me at all.

The bottom line is that the photo manager won't honor the coupons that mall stores are handing out even though the coupons are completely valid.

Later in the afternoon, the girls and I were in Harrisburg when Grace saw a billboard for Winter Wonderland at Bass Pro Shops. She asked if we might be able to keep the pictures from Bass Pro.

That stung a little. A lot.

I confirmed that we'd be able to keep the pictures.

The Santa as Bass Pro Shops was just as quiet and kind, looked just as nice, and had a long white beard just like the other one.  Mrs. Santa was also at Bass Pro Shops, and she was equally friendly. They spoke with the girls and gave each a coloring book.

At Bass Pro, you get a free photo. The girls working the camera gave us our photo in a folder, and the girls skipped off to play. The colors in the photo above look a little off, but it's my scanner. The original photo looks much better.

The girls rode the carousel, played with remote-controlled trucks, shot arrows (okay, Allie didn't shoot arrows), and played with a toy train. We spent an afternoon playing in the Winter Wonderland.

The bottom line is that Bass Pro Shops' Winter Wonderland is awesome and free. Why would you spend money for less at the mall?