I saw this craft... somewhere.

I thought it was in this month's Family Fun magazine, but I have since thrown it out, and I can't find it on their website. Oh, well. Suffice it to say that this isn't my own creation.

The results were cute, and this was one of the easier and quicker crafts to make. A couple spots of glue, press, press, and it's done.

After the glue dried, I used a needle to thread a string through the pom poms to hang it on the tree. 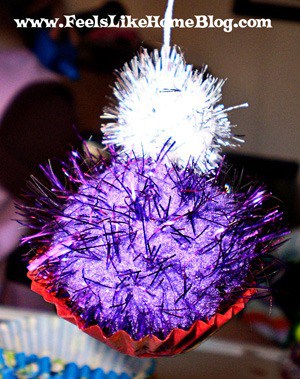 A note about crafting with a preschooler

Like all of the other ornaments we've made, my vision wasn't Grace's vision.

Looking for more ornaments to make with a preschooler? I compiled all of our ornaments crafts on this page.