I enjoyed my Simplify Family Life series so much, I'm going to keep adding to it. I hope you don't mind. This post is about how following through with natural consequences makes parenting simpler.

The girls and I went to Old Grandma's house last week. While we were there, I noticed that Grace had picked up a new habit. She was chewing on her hair.

Hair that has been chewed gets crunchy, crusty. It gets tangled and matted. Hair brushing - already a chore - becomes a veritable nightmare, especially if there are several separately chewed strands.

Her hair wasn't that long, not quite skimming her shoulders.

Don't get me started on the bangs. My biggest pet peeve when I was a teacher was hair hanging over kids' faces, and now my own progeny lets her hang down like that, no matter how often I pull it back! 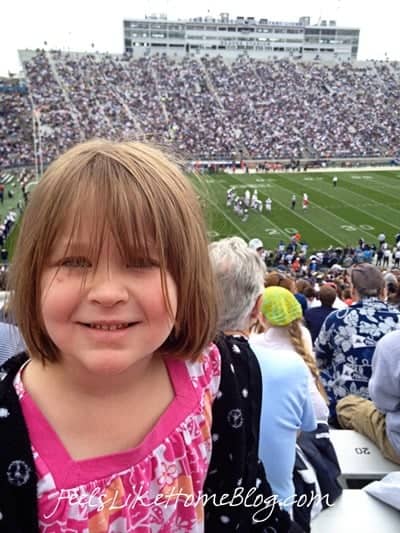 If you look closely at the hair on the left side of her face, you can see one very dark strand - the wet one I'd just pulled out of her mouth.

Anyway, we were at Old Grandma's house for a few days when I noticed Grace chewing on her hair. I told her to stop or else I'd have her hair cut short enough that it wouldn't reach her mouth.

As soon as the words left my mouth, she eyed me. I'm pretty sure she was thinking you wouldn't! Frankly, I wasn't sure.

I took her hair out of her mouth at least 17 times on Friday.

I couldn't do anything about it that day. We were at Old Grandma's, way out in the boonies.

I couldn't do anything about it the next day. We were still at Old Grandma's.

On Monday, on the way home from art class, I pulled up in front of Kids Kutters. Am I getting a hair cut? she asked.

When it was our turn, the stylist asked what kind of hair cut Grace wanted. Before she could say anything, I jumped in. "Grace's hair needs to be short enough that it won't reach her mouth."

She asked me a few questions about bangs (which had pretty much grown out without our really trying) and stacking (which she had to explain to me), and we settled on a short bob.

I thought further discussion with Grace would belabor the point. She knew exactly why she was getting a haircut, and she didn't need to hear about my feelings or my frustration or how I wish she'd listen to me.

It wasn't about me. 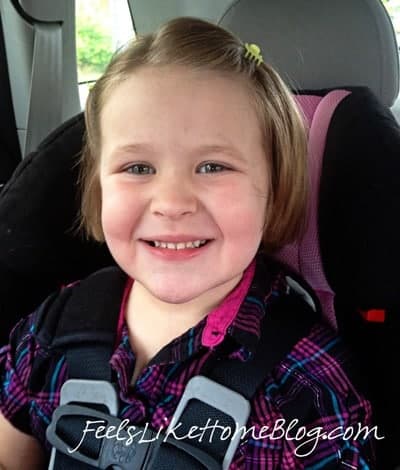 That child is almost five years old. She is not a preschooler any more; she is halfway through kindergarten.

I love the haircut. I love her sweet little face without bangs, and I love how her hair is so easy to brush. That's irrelevant, too.

The stop chewing your hair haircut was a wild success, and here's why:

1. I warned her of the consequence of her behavior, should it continue. Grace knew exactly what would happen if she continued chewing her hair because I told her. There was no emotion, no anger, no tears.

2. She knew the consequence of chewing her hair. The chewing continued. I wondered briefly if she could stop; I tried to talk myself into excusing her behavior because of anxiety or nerves. Ultimately, though, her reasons don't matter. It doesn't matter whether she tried to stop chewing her hair or not. I had drawn a line in the sand, and I had to follow through.

3. I didn't lose my cool. This was the most important part. I was completely frustrated that she wouldn't or couldn't stop chewing her hair, but I didn't let her know it. The facts were the facts, and I kept emotions out of the situation.

Parenting is so hard so much of the time, but following through on a hard consequence ultimately makes my life easier. The next time I tell her to stop doing something, she will (hopefully) remember that Momma means business.