Grace called Old Grandma last night to ask if she'd buy some Girl Scout cookies. Old Grandma was happy to oblige, and she ordered 5 boxes, more than enough to push Grace over her goal.

Finished soliciting, Grace handed me the phone so that I could chat with Old Grandma.

We've been trying to schedule aÃ‚ visit to Old Grandma'sÃ‚ for over two months - alternating sickness and bad weather have prevented us from going every free weekend we've had.

"The new doctor down at the clinic thinks I'm quite a character," she said.

"You are quite a character," I replied.

Old GrandmaÃ‚ and Allie have a lot in common. They both say things they shouldn't at funny times. They both do whatever they want and who cares what anyone else thinks? They are both always on the go somewhere and always getting into something. 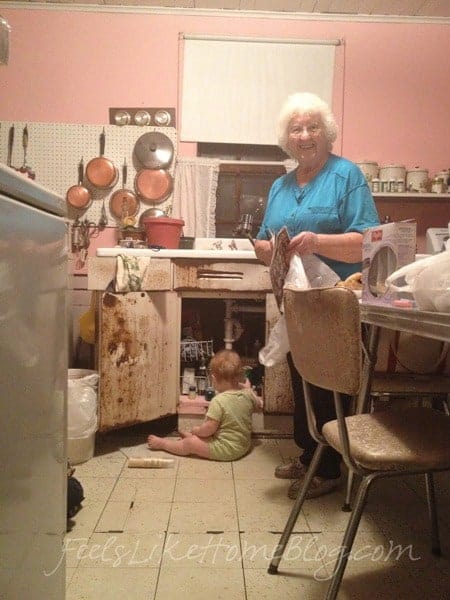 You might remember that Old Grandma's house was built in the 1860's (or maybe earlier). It's an old farmhouse in the middle of a bunch of fields.

If you've ever lived in such a house, you know that rodents move in with the cold winter weather. There are little holes here and there and, as Old Grandma says, "Some of them are big enough to throw a cat through."

Why she would say something like that is beyond me. Grandma would never throw a cat anywhere. She's kind and gentle and feeds the stray cat who drops by her porch.

But anyway, that's what she says. There are holes in the place big enough to throw a cat through.

So we got to talking about the rodents.

Squirrels are living in the attic (they have for fifty years), and there's a mouse in the kitchen.

"I think there's a whole family of them up there," she said. "But I'm gonna get rid of them."

"Yeah? How are you gonna do that?" I asked, afraid to ask.

"I haven't decided yet, but I'll get rid of them even if I have to shoot 'em."

"You're going to shoot the squirrels? In the attic?"

"Isn't that how you shot your stove?" I asked.

"Yes," she began.Ã‚ "I went down to your Uncle Mark's and told him I had a problem. He asked what the problem was, and I told him that I had killed my stove.

'What do you mean you killed your stove, Mum?' your Uncle Mark asked me. 'How'd you kill your stove?!'

I laughed and laughed. I knew it was true. She really did shoot her stove, and hearing her tell the story - again - was beyond funny.

"Did he ask why you shot your stove?" I asked her.

"What did you tell him?"

"I told him the truth, that I was shooting at a squirrel in the basement. I didn't do much damage to it, though, just enough that it was dead. It needed a little rewiring."

And then I told her that I had to go to the bathroom and asked if she wanted to come in with me or if I should hang up.

"Are you kidding?" I asked. "The children and the cats will follow me in there whether you come or not."

She laughed, and we said our good-byes.

And I chuckled all the rest of the night. I can still hear her words in my ears, "I killed my stove."

This website uses cookies to improve your experience while you navigate through the website. Out of these, the cookies that are categorized as necessary are stored on your browser as they are essential for the working of basic functionalities of the website. We also use third-party cookies that help us analyze and understand how you use this website. These cookies will be stored in your browser only with your consent. You also have the option to opt-out of these cookies. But opting out of some of these cookies may affect your browsing experience.
Necessary Always Enabled
Necessary cookies are absolutely essential for the website to function properly. This category only includes cookies that ensures basic functionalities and security features of the website. These cookies do not store any personal information.
Non-necessary
Any cookies that may not be particularly necessary for the website to function and is used specifically to collect user personal data via analytics, ads, other embedded contents are termed as non-necessary cookies. It is mandatory to procure user consent prior to running these cookies on your website.
SAVE & ACCEPT
36 shares