I have on many occasions told my husband that we should raise some chickens.

It's not because I like chickens, actually, I think they are dirty and mean and dumb, but I do like fresh, cage-free, free range eggs.

Joe always says I'm crazy (which is what my mother said when I brought it up before I was married), and so I don't have any chickens.

I do have lots of Hens and Chicks, though, and they are happily spreading everywhere I will let them go.

Even in Joe's shoes. 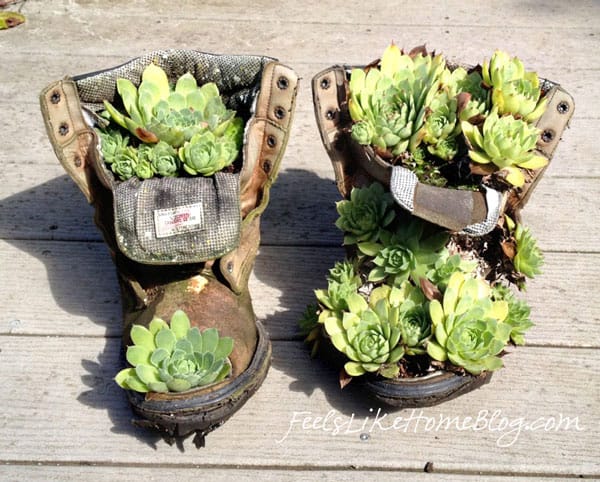 I can't show you a tutorial on these because Joe and I made them about seven years ago. They were all his idea.

He came home from work one day with new boots, and he said he'd like to plant something in his old boots.

So he cut the toe off of one and most of the front off of the other one, and I stuffed them full of dirt and plunked a couple of cheap hens and chicks in the dirt.

The one on the right took off right away. I kept it watered every couple of days, set it in the hot sun, and the hens and chicks grew and multiplied and grew more.

A couple of times a year, I pluck off all the babies that are flying out everywhere, and I plant them somewhere else. Judging from the photo above, I am due to start plucking. They're getting crowded and smooshed in the top part.

The second boot, on the left, has not gone as well. I don't think the toe opening is big enough; the hen in the toe often dies on me. Then I take one from the other boot, stick it in the empty hole, and water it.

These days, I have the boots (up high on plant stands because Allie likes to pluck the hens and chicks out of the dirt and run off) on my deck. They get hot sun from morning until late afternoon, and they get watered by the rain.

I branched out two years ago and bought a new variety that looks dusty on top. They haven't done as well, but I still have plenty of them growing in my pots. We'll see.

Every now and then, I think about buying some new hens and chicks, but I only ever see these two varieties in the garden centers and nurseries around where I live. I guess if I want more or fancier ones, I'll have to look online.

Or you could send me some.

This website uses cookies to improve your experience while you navigate through the website. Out of these, the cookies that are categorized as necessary are stored on your browser as they are essential for the working of basic functionalities of the website. We also use third-party cookies that help us analyze and understand how you use this website. These cookies will be stored in your browser only with your consent. You also have the option to opt-out of these cookies. But opting out of some of these cookies may affect your browsing experience.
Necessary Always Enabled
Necessary cookies are absolutely essential for the website to function properly. This category only includes cookies that ensures basic functionalities and security features of the website. These cookies do not store any personal information.
Non-necessary
Any cookies that may not be particularly necessary for the website to function and is used specifically to collect user personal data via analytics, ads, other embedded contents are termed as non-necessary cookies. It is mandatory to procure user consent prior to running these cookies on your website.
SAVE & ACCEPT
199 shares