Yesterday, my girls and I were wandering around the Wal-Mart (we'd gone in for one thing, but it always happens) when I saw a large glass jar. I didn't see a large empty jar on the shelf; I saw a lush terrarium. 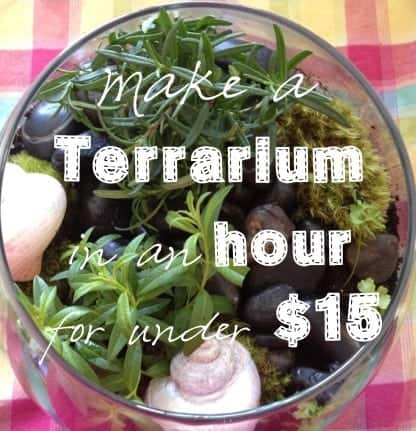 So of course, I bought the jar and a couple of herbs. The Wal-Mart didn't have any house plants, only herbs and annuals.

After poaching my garden shed, I made the prettiest terrarium ever.

Or maybe it's just the prettiest one I ever made.

Either way, it's nice.

I have been bitten by a terrarium bug. I want to make a sandy desert cactus terrarium next, but I have to wait til I get another allowance. (Have I explained that yet? Joe and I have been giving ourselves a $20 allowance every other week.)

How to Make a Terrarium for Under $15 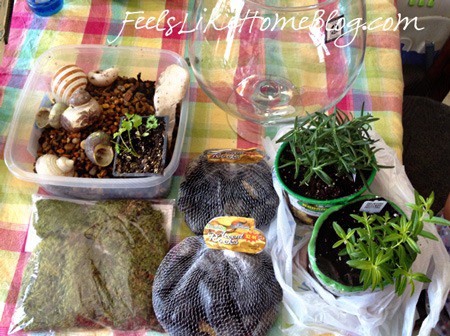 The first thing you need to do is find a big glass or jar or bowl. You can make it a closer container, but that's more complicated. We're going for easy here, so stick to something that is open at the top: a shallow glass dish, a fishbowl, a big jar, whatever. My whole project was inspired by this $7 jar at Wal-Mart (in the floral crafts section).

Next, you need some plants. I got these two herbs (rosemary and lemon verbena, chosen because they smell nice separately and together) at Wal-Mart for $3 each. The puny parsley in the rocks at the top of the photo is a freebie. I "won" it at a community event last week.

You will need something to keep the soil from falling into the gravel. I was thinking that some sphagnum moss would work well, but I didn't want to pay for it. I didn't have any old screens lying around, either. So I decided to make do with what I had, the mesh bags that the rocks came in. If you're not using bags of rocks, you could try the bag that onions come in or even pantyhose or something like that. The key is that the water goes through but most of the soil does not go through.

It didn't make the picture (because I didn't want it on my dining room table), but you will need some soil. I recycled the peat moss and soil mixture that was in some of my flower pots from last summer and added a little fresh potting soil from a bag in the garden shed.

You'll probably want some moss. I intended to dig some moss out of last year's mulch pile (that is sadly still in the end of the driveway), but I remembered that I'd purchased some for the now deceased hermit crabs. I found that in the destined for Craigslist stuff in the garage. Don't go buy moss. You can easily find it in the woods. Go dig up a handful.

Lastly, you'll need some decorations for your terrarium. I only had $15 left in my allowance, so my decorations budget was $2 (as I'd already spent $13 on the jar and plants). I found two bags of black river stones at the Dollar Tree store. At home, I got a few big seashells out of the destined for Craigslist hermit crab stuff and determined to make them work.

How to assemble your terrarium: 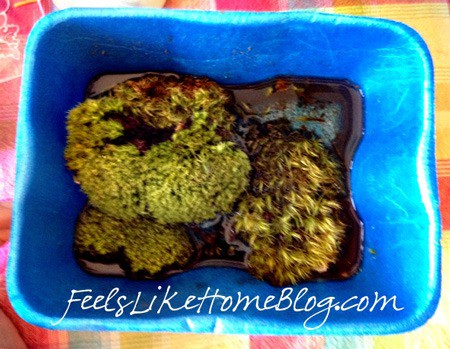 This is like step zero. That moss I found was dormant, so I soaked it in an inch of water (in an old mushroom container, if you're wondering) while I did the other steps. It greened up quickly. 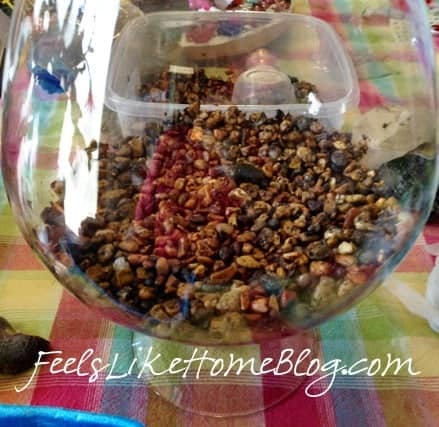 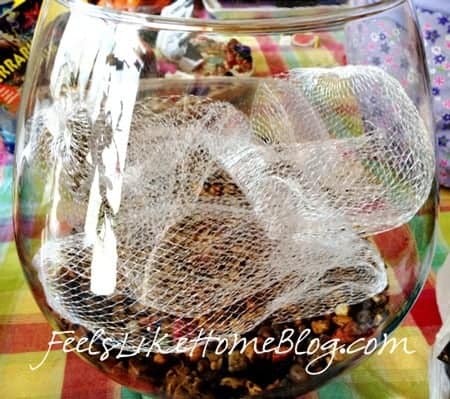 2. Dump the rocks out into a container and stuff the bags into the jar. Try to cover all the gravel with the screen or mesh or moss. 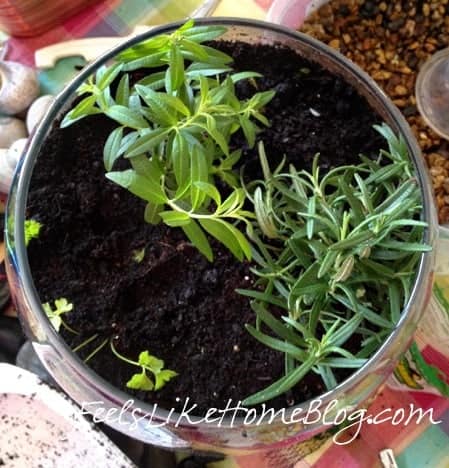 Honestly, the only reason that I threw the parsley in was that it was sitting around looking spindly. I'm glad I did, though, because the third plant rounds out the terrarium nicely.

These plants came in large peat pots. If I'd set the peat pots down inside the jar, they would have stuck out the top. I may have tried that, actually.

I tore the peat pots into large sections and laid those on top of the mesh bags. The peat pots will eventually break down, but for now, they're helping to hold the soil where it belongs.

I tried a couple of different arrangements of my plants. You'll have to experiment and move them around until you get them the way you like them.

Once you're sure the plants are where you want them, spoon extra soil into the jar. Use your hands to firm the soil around the plant roots, then smooth it out so that it's relatively level. 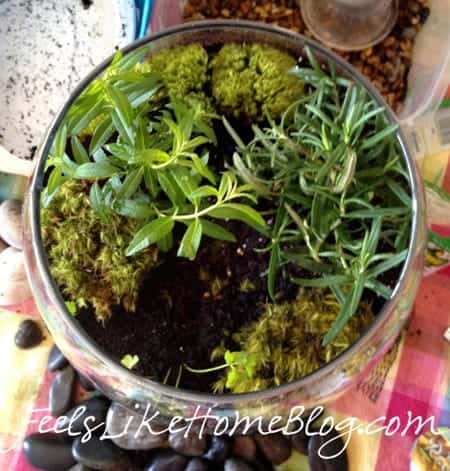 4. Planting moss is really complicated. You lay it on top of the soil and then - Wait, that's all you do. Just lay the moss on top of the soil where you want it. I had to tear my moss in half as to not knock over the spindly parsley. 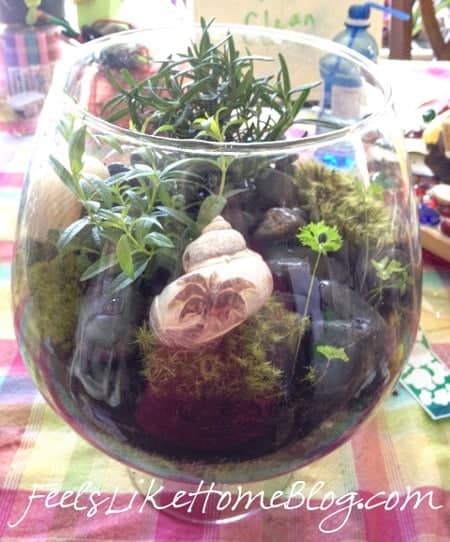 5. The last step is optional. Put your decorations in the terrarium as you see fit. I used my black river stones to cover up the soil in between the plants and the moss. Grace decided that we should have some seashells on top of the moss, so I let her put them where she wanted. 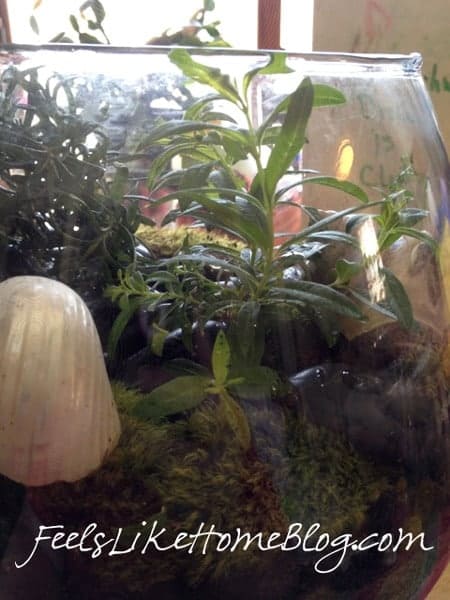 6. Before you quit, water your plants. Watering them right away moves the soil around their roots and helps them to grow in their new container.

And that's it! Enjoy your new terrarium. 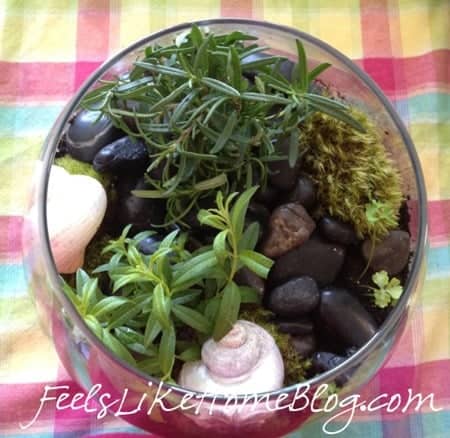 Have you ever made a terrarium? What did you put in it?