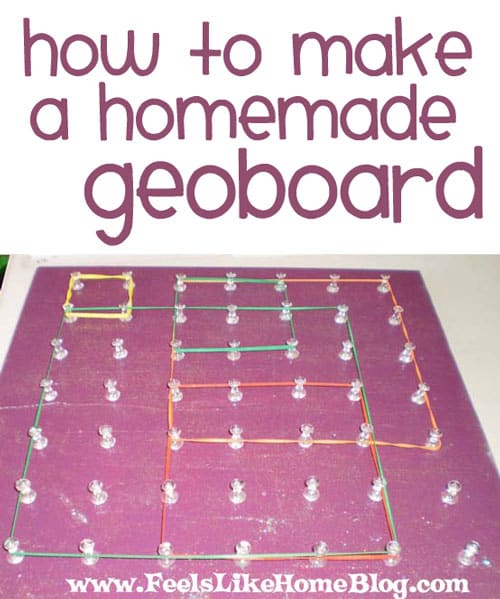 A few weeks ago, I discovered Pink and Green Mama's homemade geoboard project. I'd never heard of a geoboard before, let alone considered making one. 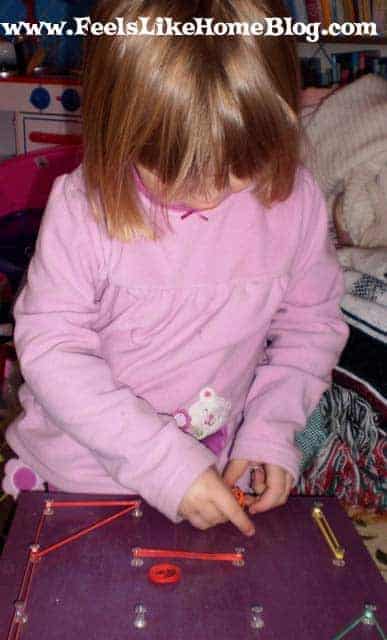 After a little Googling, I thought a geoboard would be right up our alley. Geoboards allow kids to work with geometry concepts while playing. Essentially, the geoboard is a grid with pegs in it. Since I've started looking, I've seen them made from cheap plastic (think plastic plates), heavy plastic, wood, cork board, and even peg board.

It took some time (waiting for glue to dry, waiting for paint to dry, finding time to measure the grid, etc.), but it was totally worth it. Grace loves her board, and we've played with it a couple of times a day every day since I finished it.

We picked up the supplies we needed at the local hardware store, and we got started. The materials cost around $30. We could've gotten everything a lot cheaper if we'd driven a few miles to the big box store, but... we supported the local people.

Materials for Making a Geoboard 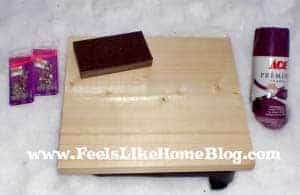 I wanted our geoboard to be one square foot, but our little hardware store didn't have any wood in that size. We ended up buying an 8-foot long plank (are they called planks?) of pine.Ã‚  Fortunately, they did cut it for us, so we had a 1-foot long piece and a 7-foot long piece. I'm sure we'll think of something to do with the rest of the wood.

How to Make a Geoboard

Playing with Your Homemade Geoboard

We had a really good time playing with our geoboard. Here are a few of the things we did: 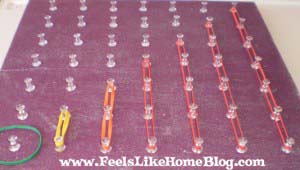 We counted the pins inside of rubber bands. Grace liked making the bands stretch longer and longer. 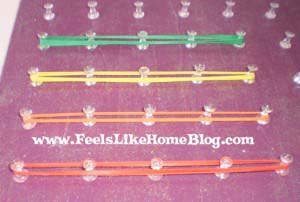 We grouped our rubber bands by color. 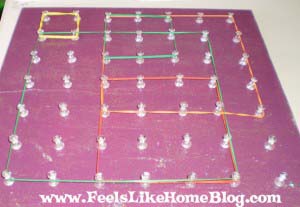 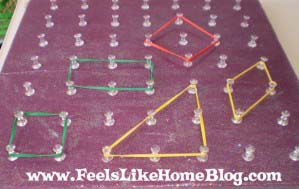 We made all different shapes. 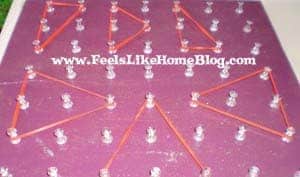 We looked at the same and different. 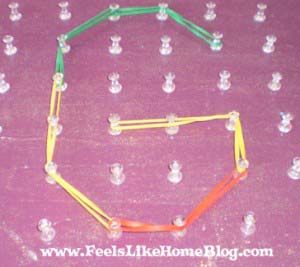 We made a G for Gracie. She never gets tired of that. 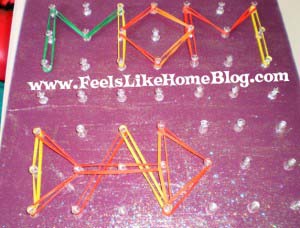 Some words are small enough to make on the board, so we did a little of that, too. Grace is starting to recognize a few words, so it's really fun for me to write things she knows.

I don't know how I managed to not take a picture of our maze, but we also made a rubber band maze with our board. Grace's Littlest Pet Shop animals ran around the maze, and we tilted and turned the board around to make a marble go through it, too.

I'm also thinking about making some cards with shapes that Grace can try to recreate. I think she'd like that, if she's got the fine motor skills to do it at this point.

This website uses cookies to improve your experience while you navigate through the website. Out of these, the cookies that are categorized as necessary are stored on your browser as they are essential for the working of basic functionalities of the website. We also use third-party cookies that help us analyze and understand how you use this website. These cookies will be stored in your browser only with your consent. You also have the option to opt-out of these cookies. But opting out of some of these cookies may affect your browsing experience.
Necessary Always Enabled
Necessary cookies are absolutely essential for the website to function properly. This category only includes cookies that ensures basic functionalities and security features of the website. These cookies do not store any personal information.
Non-necessary
Any cookies that may not be particularly necessary for the website to function and is used specifically to collect user personal data via analytics, ads, other embedded contents are termed as non-necessary cookies. It is mandatory to procure user consent prior to running these cookies on your website.
SAVE & ACCEPT
424 shares