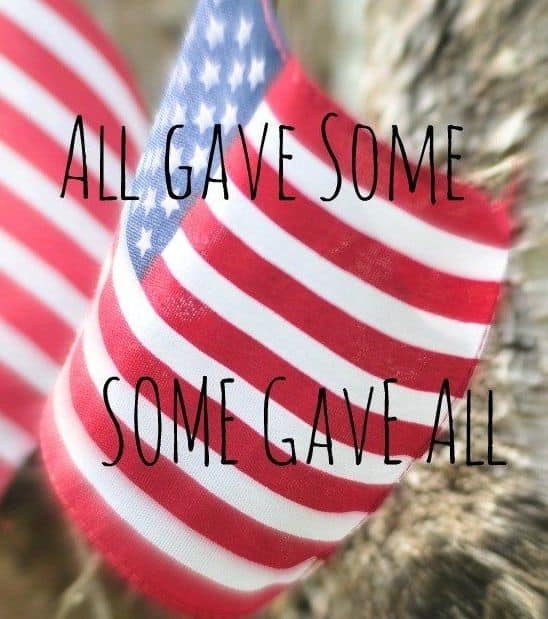 When I was in sixth grade, I had a Billy Rae Cyrus cassette (cassette!) that I listened to constantly. The only song from it that I still remember is called Some Gave All.

In the midst of my tween angst, I was moved by its lyrics.

I knew a man called him Sandy Kane
Few folks even knew his name
But a hero was he
Left a boy, came back a man
Still many just don't understand
About the reasons we are free

All gave some and some gave all
And some stood through for the red, white and blueÃ‚
And some had to fall
And if you ever think of me
Think of all your liberties and recall
Some gave all

All gave some and some gave all
And some stood through for the red, white and blue
And some had to fall
And if you ever think of me
Think of all your liberties and recall
Some gave all

And if you ever think of me
Think of all your liberties and recall, yes recall
Some gave all

My kids aren't quite old enough for tween angst or even to understand the weight of Memorial Day, but their day can be more than swimming and a picnic.

For our little kids, the key to celebrating Memorial Day is making it personal and concrete. It can't be about freedom and bravery; it has to be about human beings and acts of gratitude.

How to Celebrate Memorial Day with Kids

You don't have to be elaborate to observe Memorial Day, but I do think it's important to do something to remind yourself and your kids that our freedom isn't free and people, real, living, breathing human beings, are working hard to protect it.

America's White Table - I didn't know this before reading the book, but in many mess halls, there is a small white table prepared to remember fallen soldiers. No one ever sits there. This is a storybook that explains the significance of each item set on the table. It's very well done.

Memorial Day (Let's Celebrate) - This is a non-fiction book full of photos of real children.

Memorial Day (Rookie Read Aloud Holidays) - This is another non-fiction book, but this one describes the history of the holiday as well as current observances.

The Poppy Lady  - This is the true story of the woman who established the red poppy as a symbol of veterans and remembrance. This book is great for Veteran's Day as well as Memorial Day.

Rolling Thunder - Apparently, there is a motorcycle rally every Memorial Day in Washington DC called Rolling Thunder Ride for Freedom. It celebrates all the American men and women who have served our country, and this is the story of one such Memorial Day ride as told by a little boy who participated with his grandpa.

The Wall - Another storybook that would be great for Veteran's Day or Memorial Day, this tale is about a little boy and his dad as they visit the Vietnam Wall.

How do you celebrate Memorial Day with your kids?