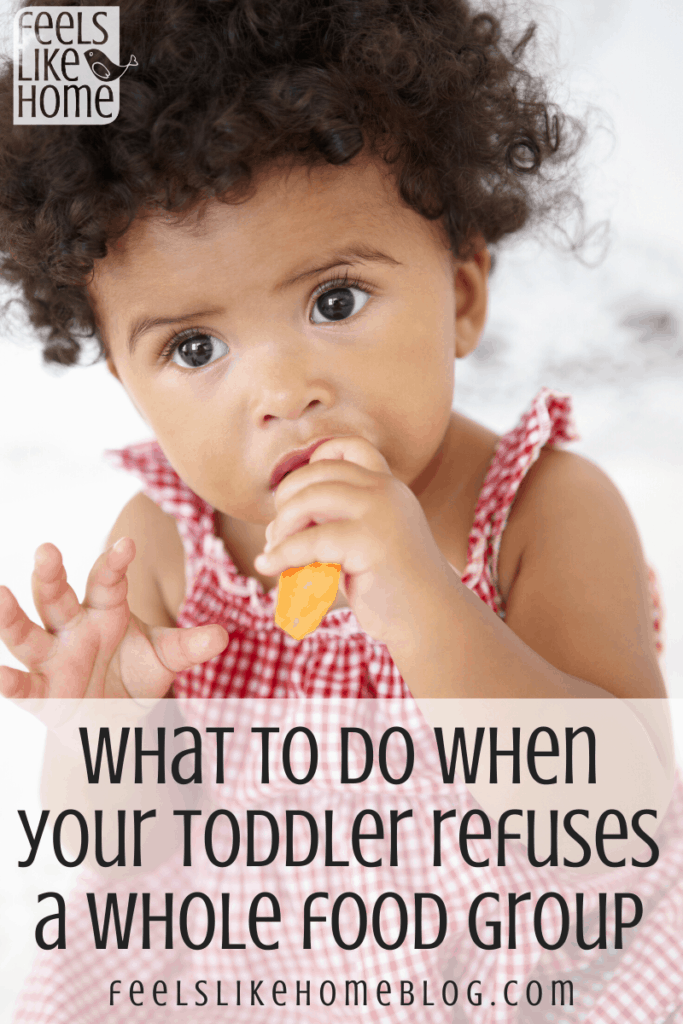 Toddlers can be picky eaters. What to do when your young child refuses to eat a whole food group. Mom can get them to eat using some substitutions. You don't want to fight with your kids over eating. Tips, advice, and ideas for feeding toddlers and families.

Two weeks ago, I told you that the USDA recommends most toddlers eat about 1000 calories per day, and last week, I gave you some examples of what kinds and amounts of foods could equal a serving in each of the food groups. Today, we'll address some stumbling blocks to a toddler's balanced diet.

Help! My toddler eats too much of one food group!

Remember that nutrition can carry over several days, right? So it might not unusual for your toddler to eat three days' worth of grains on Saturday, and then refuse to eat any more grains until Tuesday.

Do be careful, however, if she eats three days' worth of grains each and every day.

What if my toddler doesn't want to eat grains?

Last week, I told you that your toddler should eat 3 ounces of grains per day. (Remember that at least half of these grains should be whole grains.) Some suggestions that you may not have considered:

What if my toddler doesn't want to eat vegetables?

Last week, I told you that your toddler should eat 1 cup of vegetables per day.  Some suggestions that you may not have considered:

What if my toddler doesn't want to eat fruit?

Last week, I told you that your toddler should eat 1 cup of fruit per day.  Some suggestions that you may not have considered:

What if my toddler doesn't want to drink milk?

Last week, I told you that your toddler should eat 2 cups of milk per day.  Some suggestions that you may not have considered:

What if my toddler doesn't want to eat meat?

Last week, I told you that your toddler should eat 2 ounces of meat or beans per day.  Some suggestions that you may not have considered:

This website uses cookies to improve your experience while you navigate through the website. Out of these, the cookies that are categorized as necessary are stored on your browser as they are essential for the working of basic functionalities of the website. We also use third-party cookies that help us analyze and understand how you use this website. These cookies will be stored in your browser only with your consent. You also have the option to opt-out of these cookies. But opting out of some of these cookies may affect your browsing experience.
Necessary Always Enabled
Necessary cookies are absolutely essential for the website to function properly. This category only includes cookies that ensures basic functionalities and security features of the website. These cookies do not store any personal information.
Non-necessary
Any cookies that may not be particularly necessary for the website to function and is used specifically to collect user personal data via analytics, ads, other embedded contents are termed as non-necessary cookies. It is mandatory to procure user consent prior to running these cookies on your website.
SAVE & ACCEPT
15 shares