I have never passed by a birth story without reading it.

I think those stories are the ties that bind women. Every woman who has given birth has shared the same experiences, no matter the individual circumstances.

I find them fascinating.

So. If you aren't interested in reading my birth stories, stop now and ignore my post next Thursday, too. You've been warned.

I wrote this out in the days following Grace's birth. I have a journal in which I wrote every single day for the first ten weeks of her life. This is the first entry.

The last two weeks of my pregnancy were especially uncomfortable. I was very weary, and my doctor was telling me that the baby was bigger than nine pounds. There was a strong possibility that she wouldn't fit through my pelvis for a natural birth. I was scared; I did not want a c-section.

I felt like I had been pregnant forever. I was infinitely frustrated and ready for the baby to be OUT. I had all kinds of aches and pains, nausea, exhaustion, and I was emotionally drained.

I thought the doctor stripped my membranes at my appointment, but I wasn't sure. He mentioned something like, "I'm going to dig around a bit while I'm in here." when he was checking my cervix, but he didn't say specifically that he was going to strip my membranes. The whole thing took less than thirty seconds, and it didn't hurt at all, so I wasn't sure if he actually did it.

Within an hour of my appointment, I started feeling regular but painless contractions, about every 10 minutes. We were at a restaurant, then we went shopping at Sam's Club. By the time we got home, the contractions had totally petered out. I was more exhausted than ever before in my life. I was so tired that it was a major effort even to pick up my feet. My whole body ached, especially -

Well, maybe I should keep some parts of the story private. I'm thinking you don't want to know all of the details.

I went to bed disheartened, with no contractions at all.

I woke up at 3:39 am with a searing, painful contraction. I didn't know what was going on. 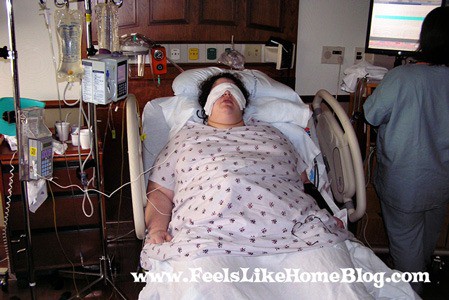 After 5 more contractions, all exactly 6 minutes apart, I woke Joe up and told him that we'd probably be leaving for the hospital within the hour. I waited until 4:30, and then I called the doctor.

We arrived around 5 am. As soon as the Labor & Delivery doors opened, I threw up on the floor. After the nurses cleaned that up, they attached me to monitors and antibiotics, and my contractions slowed down.

I was dilated to 4 cm, so the doctor admitted me to the hospital even though my contractions were becoming further apart instead of closer together. Around 8, my nurse told me to start walking the halls.

I walked to the end of the hall and back, and my contractions quickly intensified. I started throwing up like crazy. It soon became clear that my body was cleansing itself for delivery.

I had intended to have a medication-free birth, so I focused on breathing through the contractions. By 10 o'clock, they were becoming unbearable. They were almost entirely in my back, and they were sharp and long.

I was worn out.

I couldn't breathe through the contractions any more. I stood up with each one, hoping to find some relief from the agonizing pain in my back. Tears stung my eyes, and I could no longer endure quietly.

My drug-free birth went out the window, and I begged for an epidural.

Two hours later, I finally got one.

By noon, the epidural was working, and I was comfortable for the first time since arriving at the hospital. Unfortunately, within the next thirty minutes, the contractions came back and I was again feeling the excruciating contractions.

The anesthetist returned to add more medicine to my epidural, and I was finally relaxed and feeling fine. Eventually, I stopped feeling the contractions all together.

I was afraid that my contractions would come back again, so I pushed my more meds button every time my blood pressure cuff tightened.

Before long, I couldn't move or even feel my feet, and that was just fine with me.

When the midwife returned to examine me, I told her that there was no rush and I could labor like that all day and all night. I had progressed to 8 cm, so she broke my water, noting that it contained meconium.

I napped until around 2 pm. The midwife explained that I wouldn't be ready to push for several more hours as the epidural likely slowed my progress. My body would do most of the work, she explained, and the baby would be engaged in my pelvis. As she finished her speech, she discovered that not only was I fully dilated, but the baby's head was already engaged.

Thanks to my button pushing, I still couldn't feel or move my legs. Joe and my little sister had to hold my legs up so that I could push; I was dead weight.

I never had any pain, no pressure, no urge to push.

I've always heard about people straining to push the baby out, but it wasn't like that for me. I wasn't even sure I was pushing correctly because I couldn't feel anything.

I pushed for about forty minutes, and Grace slid right out. I clearly remember the midwife saying, "Hey! Stop pushing!" and I replied, "Pushing? I'm not doing anything!" 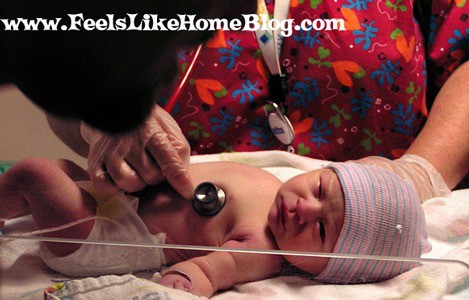 She was born at 3:38 am, exactly 11 hours and 59 minutes after that first contraction. Because of the suspected meconium, doctors from the NICU whisked Grace away for oxygen and an evaluation.

I had virtually no pain. The epidural didn't wear off until late into the night, so I couldn't get out of bed or use the bathroom, but I wasn't complaining.

For the duration of my pregnancy, I said that I deserved to have an easy birth since my pregnancy was characterized by three words - excessive daily vomiting. That's exactly what I had.

It was lovely, and I was completely enamored with my baby girl from those first moments.