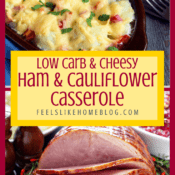 Cheesy low-carb ham and cauliflower casserole is the ultimate low-carb comfort food. I created the recipe to use up leftover ham, but I liked it so much that I'll be buying ham steaks specifically to make it.

Anyway, since my mom passed away several years ago, I have no one to ask for the recipe from that Girl Scout contest.

I was thinking of that casserole though, when I decided to put this recipe together.

After Christmas dinner, we had almost 15 pounds of ham to use up. Joe packaged a lot of it in 1-pound bags, but we still had two tubs full of it in the fridge. I ate a lot but I was getting tired of plain old ham for every meal.

We had intended to eat roasted cauliflower for Christmas Eve dinner, and we forgot to cook it, so there were almost two full heads in the refrigerator. I put the two things together with some various cheeses and creamy bits and this recipe was born.

This ham and cauliflower casserole does take a bit of time to prepare because you have to first roast the cauliflower and then bake the casserole. For that reason, I don't think it's a good candidate for a weeknight meal, although it does reheat very nicely, so you could easily make it on the weekend and just heat it up during the week.

Check out these other low carb recipes: 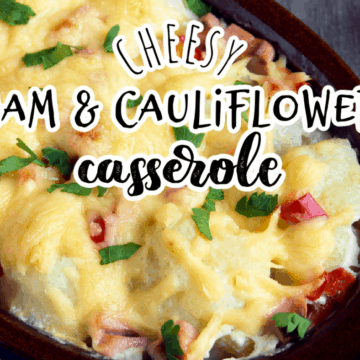 I prefer to use Greek yogurt anytime a recipe calls for sour cream because Greek yogurt has fewer carbs, fewer calories, and less fat (I usually buy the 0% fat). I have never noticed a change in the flavor of a recipe with Greek yogurt. If you prefer sour cream, by all means, use that instead.