Before we were parents, Joe and I had big ideas about parenthood.

In our happy world, we tucked our children into their beds every night at 7:30 pm, read them a story, and kissed their little foreheads. Joe and I enjoyed quiet time together, and I had plenty of uninterrupted time to work from home. They awoke around 8 the next morning, happy and ready for breakfast.

Then we actually had some kids. 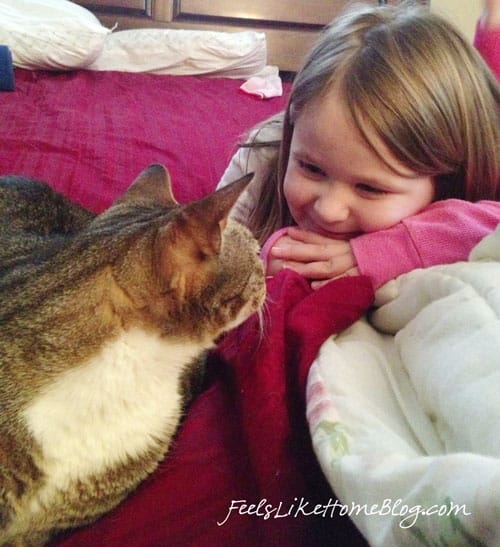 And, well, you know.

Things haven't exactly turned out the way we intended.

Here's how bedtime goes down.

Bedtime begins in the afternoon when Allie refuses to take a nap.

Because she's two and cheating herself in the sleep department, Allie usually collapses in the late afternoon. Yesterday, it was 6pm.

Grace begins to get tired around 7:30 pm. We wind down by watching a little quality tv - usually Max & Ruby or Dora the Explorer.

If we haven't just eaten dinner (often we have), the girls get a snack and enjoy some cuddle time with Joe while I work.

Sometimes, Grace gives up and asks to go to bed. Other times, Allie caves first and begins to request her buhbuh.

(Yes, we are those parents. Don't judge us.)

The rest of the time, Joe says it's time to go to bed, and the whole troop trudges upstairs to my bed.

Joe reads a story, tucks everyone in, makes sure they all have their stuffed animals, and turns off the light.

Then he lays down in my spot on the bed, and he waits for them to fall asleep.

I don't know what happens after that for Joe. I think he usually dozes off.

One day a week, I take the bedtime duty. Here's what happens for me.

Right after I turned the light off, Allie realized that she'd lost her puppy. Her puppy was actually Grace's unicorn, so it had been lost to her sister's arm. No amount of consoling would appease Allie who desperately needed the puppy to go to sleep, and no amount of cajoling would convince Grace to give it up.

Joe came and went with a half dozen other stuffed animals until a large Minnie Mouse cheered Allie up and bedtime could continue.

Shortly after Minnie Mouse showed up, Allie decided that her pillow was no good. She still doesn't talk very much, so in lieu of speaking, she sat up, grabbed her pillow, threw it to the floor, and took the one from under my head.

No! Pi'ow. she replied, settling in to the new pillow.

Allie's pillow and mine are identical, so I took hers off the floor and laid back down.

Pi'ow! she complained again, and repeated the whole process.

Back to our original pillows, we laid in quiet for a minute or two. It was just long enough to close my eyes and take three or four deep breaths.

Allie stood up in the bed, turned around a few times (like a dog), and laid down with her head at my knees. Massaging my face with her stinky feet, she played with Minnie Mouse.

I must've dozed off because the next thing I remember was Grace complaining, "Mom. Allie is pulling my hair."

"No! Allie! No pulling Sissy's hair!" I leaned up on one elbow to remove Allie's fingers from Grace's hair.

"Yes, Sissy has hair. She doesn't want you to pull it."

Allie laid down and began stroking my hair instead. Stroking and pulling feel pretty much the same where two-year-old fingers are concerned, but I let her go on until Grace again spoke up.

"Mom. Allie is kicking me."

"Allie! No kicking Sissy!" I leaned up on my elbow again, and I swung Big Al's lower body off of Grace and back into the middle of the bed.

Then Allie discovered the Pillow Pet Dream Light that my mom and sister gave her for Christmas.

Mommy! Stars! Stars, Mommy! she squealed, looking at the many stars projected onto the ceiling.

Neigh! Neigh, Mommy! Neigh! The Dream Light has a giraffe in the middle of the stars, and it looks enough like a horse to amuse Allie.

She babbled and giggled and cooed and turned the light on and off, orange and green and purple.

I thought the talking would never end.

When I was a teacher, one of the discipline techniques I learned was planned ignoring. You let the behavior go on for a little while, to see if it will fizz out on its own.

Allie didn't seem to be bothering her now-sleeping sister, so I let her babble.

I was right. She eventually did babble herself out, 57 minutes after I turned the lights off.

This website uses cookies to improve your experience while you navigate through the website. Out of these, the cookies that are categorized as necessary are stored on your browser as they are essential for the working of basic functionalities of the website. We also use third-party cookies that help us analyze and understand how you use this website. These cookies will be stored in your browser only with your consent. You also have the option to opt-out of these cookies. But opting out of some of these cookies may affect your browsing experience.
Necessary Always Enabled
Necessary cookies are absolutely essential for the website to function properly. This category only includes cookies that ensures basic functionalities and security features of the website. These cookies do not store any personal information.
Non-necessary
Any cookies that may not be particularly necessary for the website to function and is used specifically to collect user personal data via analytics, ads, other embedded contents are termed as non-necessary cookies. It is mandatory to procure user consent prior to running these cookies on your website.
SAVE & ACCEPT
5 shares