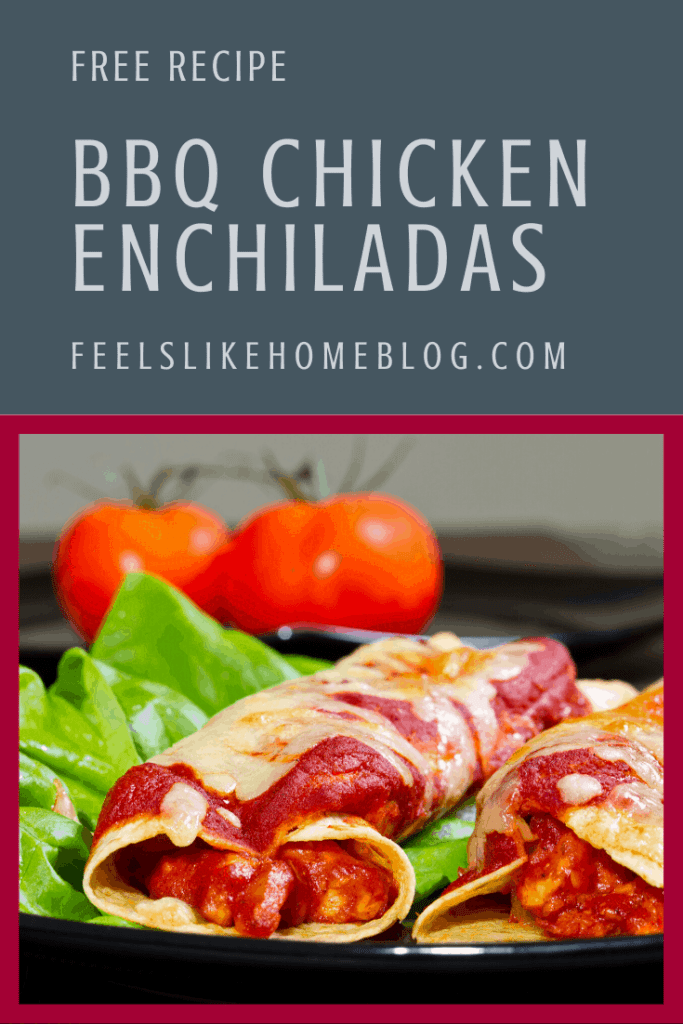 These BBQ chicken enchiladas are my family's favorite because they're loaded with chicken smothered in sweet BBQ sauce and spicy enchilada sauce and topped with generous amounts of cheese.

While I was writing a blog post recently, Joe asked me what we should have for dinner. It was late in the day, and we needed something quick and easy.

I suggested BBQ chicken enchiladas, knowing that we had everything required. Joe thought they sounded good, too, so he got to work.

And then he realized that we didn’t have any enchilada sauce, only taco sauce.

Rats. The recipe was already started.

Instead of bagging the whole thing (my mouth was watering for BBQ chicken), I found a recipe for enchilada sauce on AllRecipes.com. Fortunately, we had everything we needed for that recipe, so Joe’s enchilada preparation continued.

When those enchiladas came out of the oven, they were gorgeous.

Then we tasted them.

These were the most delicious enchiladas I have ever eaten, and I like enchiladas.

Oh my goodness delicious. The sweet BBQ sauce combines with the slight spice of the enchilada sauce for a whiz bang explosion in your mouth. These enchiladas are the real deal.

What about the enchilada sauce?

The homemade enchilada sauce takes about ten minutes to prepare, and it will make your enchiladas so very delicious.

We like the homemade sauce so much that we never buy the canned stuff anymore. Only homemade will do around here. 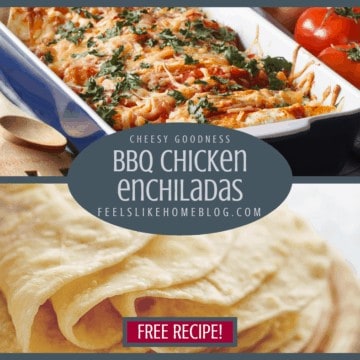 For a bariatric portion, I reserve 5 ounces of the BBQ chicken enchilada mixture from the tortilla wrapping process, and I eat that portion of chicken topped with ½ ounce of shredded cheese, an extra spoonful of the BBQ enchilada sauce, and ½ avocado.
Tried this recipe? Pin it for later!Follow @FeelsLikeHome or tag #FeelsLikeHomeBlog!
13 shares

This website uses cookies to improve your experience while you navigate through the website. Out of these, the cookies that are categorized as necessary are stored on your browser as they are essential for the working of basic functionalities of the website. We also use third-party cookies that help us analyze and understand how you use this website. These cookies will be stored in your browser only with your consent. You also have the option to opt-out of these cookies. But opting out of some of these cookies may affect your browsing experience.
Necessary Always Enabled
Necessary cookies are absolutely essential for the website to function properly. This category only includes cookies that ensures basic functionalities and security features of the website. These cookies do not store any personal information.
Non-necessary
Any cookies that may not be particularly necessary for the website to function and is used specifically to collect user personal data via analytics, ads, other embedded contents are termed as non-necessary cookies. It is mandatory to procure user consent prior to running these cookies on your website.
SAVE & ACCEPT
13 shares