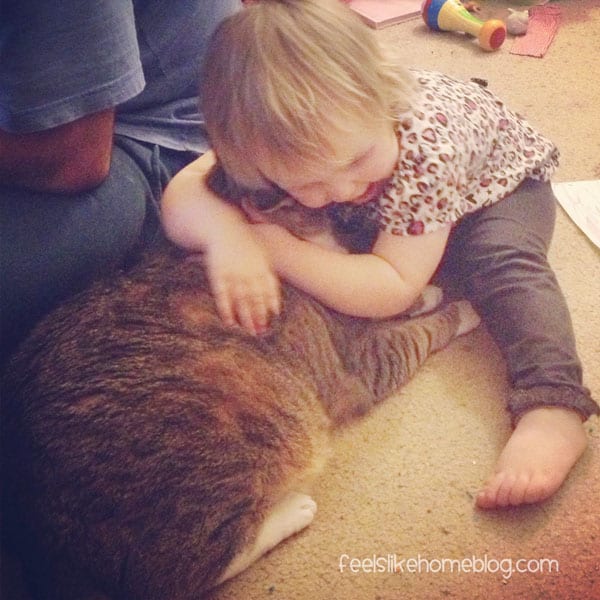 Something happened this week that is so typical of Allie right now.

One of our cats, Zeus, is testy. He has a giant personality, and he always has. He doesn't like men at all, and he has always pushed Grace around.

Grace is afraid of him. She won't walk over him in the hallway; she waits for him to move. If heÃ‚ meowsÃ‚ at her, she will jump off the couch, jump out of his way, or jump up onto a chair to get out of his reach. She's learned that he only talks when he's mad, and if he's mad, a swipe may soon follow.

Just today, Zeus and Grace were sitting in our oversized chair with me. I was brushing him (a task of which he does not approve), and he complained. Grace was off my lap and across the room in one step.

When he started purring again, Grace came back to sit in the chair with us. Allie joined the party, sitting on Grace's lap next to the cat.

I was still brushing.

He cried, voicing protest to the ruffling of his feathers.

Grace gasped, trying to wiggle out of the pile.

Allie sat up straight, looked at me with wide eyes, and squealed, "ZEUS! TALK! TO ME!"

And then she grabbed him around the neck with both arms and hugged and squeezed and rocked his head back and forth.

He never got the chance. It's hard to scratch someone who's hugging your neck.

She continued to hug and rock and gush about "Nice Zeus" and "Zeus talk!" for longer than I thought he would allow.

He never made another peep, and he never scratched.

When he'd had enough of her loving, he stood up and jumped down and left the room.

Zeus may have a giant personality, but Allie's is bigger.