After the wasteful extravagance of Grace's first birthday party, I realized that two cakes were one too many. I would make just one cake for Allie's birthday.

Grace asked me to make triple chocolate cake again. It sounded like a good idea, but I worried that it wouldn't make enough cake.

I baked that cake for my dad's birthday, and it served five people. Granted, we ate like pigs because it was completely and utterly amazing, but still. Five people.

Knowing that we'd be serving cake to at least 10 people, I decided to double the cake recipe and put it in a 9x13 pan. That seems reasonable since the original recipe is for a bundt pan, right? 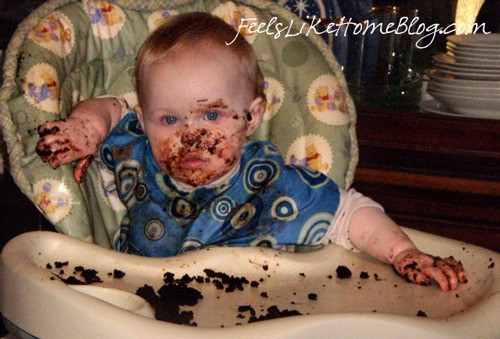 The whole thing was a big mistake.

It was a big, ugly, hairy monster of a mistake, in fact.

Can I double the cake recipe?

NO! NO, YOU CAN'T! (Yelling intended)

I thought one cake mix wouldn't be enough for the 9x13 pan, so I doubled the recipe: 2 cake mixes. 2 boxes of pudding. 4 cups of chocolate chips. 2 cups of sour cream. 2 cups of vegetable oil.

The 9x13 pan overflowed in the oven, filling the oven and the kitchen with smoke.

An oven filled with smoke bakes a cake that tastes like smoke.

The cake was still jiggling like the ocean after the recommended 55 minutes at 350. The cake eventually baked for 90 minutes (and turned out not quite done in the center).

During 90 minutes of baking, the bottom quarter-inch of the cake turned to charcoal. It was black and dry and crusty. When I was considering serving it to the party guests anyway, I tasted it and dry heaved.

When the bottom quarter-inch of a cake burns, the whole cake tastes burnt. Smokey and burnt. Score!

When should I bake the cake?

THE DAY BEFORE! Or the day before that. Don't do it on the morning of the party, even if the party isn't until afternoon.

Allie won't drink a bottle unless it's warm, not room temperature and certainly not cold. It has to be noticeably warm, even now that she's one.

On the other hand, Allie does not like her cake to be warm. She wouldn't eat - or even play in - the cake until it had cooled off.

Also, if you frost a cake before it's completely cooled, the fabulous homemade butter cream frosting (that you also screwed up, see below) will melt and turn into a thin glaze and run off the cake, over the sides of the 9x13 pan, and onto the stove and counter.

Or onto the other foods in the freezer, where you've put the cake in a feeble attempt to make the frosting stop running off.

Lesson 2 - Bake the cake the day before you need it!

What if I make the butter too soft?

Put the butter back in the fridge and start over with a new stick.

If you try to make frosting with melted butter, you will make a crumbly paste, reminiscent of the topping you put on apple crisp.

Nothing will make that crumbly paste turn into frosting.

If you continue to attempt to make frosting, you will end up with a semi-smooth chocolate frosting full of grit the size and texture of Nerds candy.

Even if you put it in the freezer to firm up and whisk the heck out of it with your stand mixer.

You'll still have gritty frosting that melts into a thin glaze and runs all over the floor.

This cake was a spectacular failure. Burnt, falling apart, tasting of smoke and charcoal, it was awful.

Everyone ate it; some people had two pieces.

They were just being nice.